DOWNTOWN — Call it revenge of the nerds: Chicago's march for science is almost here.

About 13,000 people said on Facebook they're going to the post-Trump Earth Day rally for science on Saturday. Another 32,000 said they're interested.

The event will step off Saturday morning in Grant Park, starting with speeches by four distinguished scientists from local museums and other Chicago institutions. A march down to the Field Museum will follow, and scientists and science enthusiasts alike can cap their day with a "science expo," or an ad hoc showcase of scientific works.

The Field Museum is slashing its basic admission price in half, to $11 for adults, on Saturday in honor of the event.

Here's what to know if you go:

Local organizers said "recent events in public policy have put a spotlight on the scientific community, science, and their role within government, media, and the public."

"This is the time for us to come together as one community, take a stand, and lead a new conversation," the organizers said in a statement.

The Chicago march is one of hundreds planned around the world Saturday, or Earth Day.

What recent events in public policy are they talking about?

President Donald Trump has drawn ire from many scientists, including some who work for the federal government. Trump denied the notion of man-made climate change as a presidential candidate, and has appointed people connected to the fossil fuel industry to top cabinet posts as president. He is pushing forward on the controversial Dakota Access and Keystone oil pipelines, and notoriously ordered national parks to stop tweeting after the National Park Service retweeted side-by-side photos comparing Trump's inauguration turnout to President Barack Obama's in 2009.

Where is the march?

The rally will start at 10 a.m. near a stage at Jackson and Columbus drives before a march at 11 a.m. to the Field Museum. 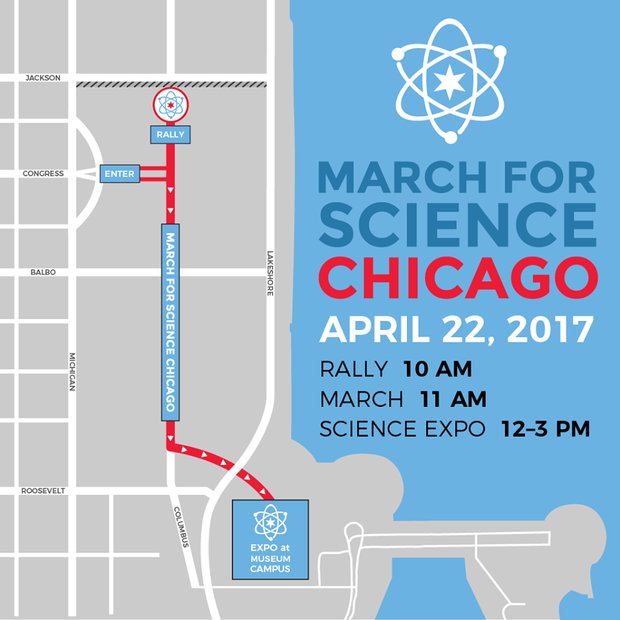 Who's speaking at the rally?

The keynote speaker is the Field's Emily Graslie, who hosts the museum's "Brain Scoop" YouTube series.

Other speakers include Garry Cooper of Rheaply, an online scientists' network; Dr. Lee Bitsoi, a stem cell researcher and director of diversity and inclusion at Rush University; Karen Weigert, the city of Chicago's first chief sustainability officer; and a science essay contest winner who has yet to be announced.

How can I get there?

The organizers highly recommend taking public transportation, but cars can drop off passengers along Congress Parkway's horseshoe near Grant Park. The rally entrance is at Michigan Avenue and Congress Parkway. There is no public entrance at Jackson.

Where can I park?

The organizers put together this list of parking options Downtown. Traffic will likely be congested Saturday. There will be no parking available at the Field Museum or nearby Soldier Field.

Will there be food?

There will be porta-potties in Grant Park during the event, but other nearby places with public bathrooms include the Chicago Cultural Center, 78 E. Washington St., and Harold Washington Library, 400 S. State St.

Can I bring signs?

Can I sell anything during the rally?

What if it rains?

Rain isn't in the forecast, and organizers say the event will continue unless there is a "severe storm."

What can I do after the rally?

Organizers say the science expo is an opportunity to discuss next steps with like-minded activists. You can also donate to the cause here.

Chicago Police Nabbing More Fugitives, but the Hunt Is Slow