BEVERLY — A moving truck will not be needed when the Rev. William Malloy retires July 1: The pastor of St. Barnabas Parish plans to continue living at the rectory at 10134 S. Longwood Drive.

His replacement, the Rev. James Donovan, also already lives in the rectory at the top of the hill. And Donovan said Tuesday he expects Malloy to stay with St. Barnabas as pastor emeritus after a brief sabbatical this summer.

Meanwhile, Malloy, an ardent White Sox fan, reflected Monday on his career as a Catholic priest. He was ordained in 1973 and spent the bulk of his career serving parishes on the Southwest Side and in the southern suburbs.

"Being a parish priest, I always felt that was the best job there could be," said Malloy, 69, adding that about the only thing he'll miss is the occasional three-hour meetings.

His resume also includes stints at St. Maurice in McKinley Park, Incarnation Catholic Church in suburban Palos Heights and St. Bernadette in Evergreen Park. Malloy met his replacement while at St. Germaine in suburban Oak Lawn. Donovan was then at nearby Our Lady of Loretto in Hometown. 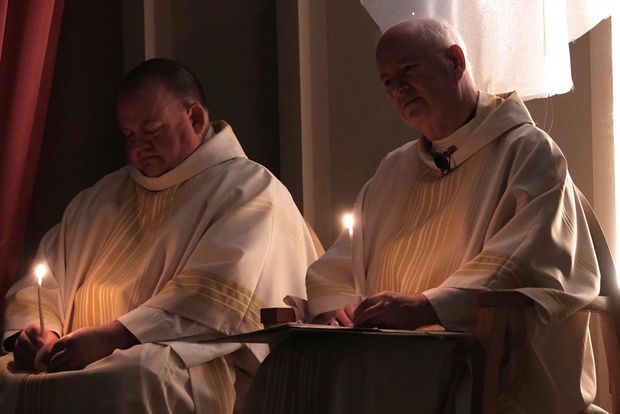 The Rev. James Donovan (left) will replace the Rev. William Malloy as pastor of St. Barnabas July 1. Malloy is retiring but plans to continue to serve the Far Southwest Side parish as pastor emeritus. [Supplied Photo]

Donovan moved into the rectory nine years ago. A priest since 1987, Donovan has spent the last four years as a vicar for the Archdiocese of Chicago, ministering to troubled priests including those suffering with depression, alcoholism or other issues.

"People know him. He has celebrated Mass here on Sundays," Malloy said. "He will hit the ground running."

Donovan said he has a few ideas for the parish but will save those until Malloy's term ends. Mostly, though, he's interested in maintaining the parish's already strong sense of community as well as the "lively faith" that extends beyond the pews.

"There is a lot of great things here, and you just want to continue to build on them," Donovan said.

Malloy echoed this same idea when reflecting on his time at St. Barnabas, adding that the parish plays a particularly important role in the community. In fact, he often sees graduates of the school move back into the neighborhood to raise their own children.

"You have to enjoy each other's company, and we do that in spades. We love to have parties," said Malloy, who said he's feeling strong after recently being diagnosed and undergoing treatment for cancer.

Malloy said he's always impressed by the parish's response to sickness, death or misfortune, as meal trains make it so "nobody has to cook for a year." He also said he rarely had to ask for volunteers at St. Barnabas, as community members are eager to help.

Among the notable events during his time as pastor, Malloy pointed to a pair of faith-focused discussions — one which keyed in on the plight of immigrants, Muslims and refugees and the other that put a spotlight on violence in Chicago. This event was headlined by the Rev. Michael Pfleger and drew some criticism.

Malloy said he didn't regret either event as he hoped both gatherings "opened people's hearts and minds." And he hopes to continue to do just that by working in adult faith formation in retirement.

"It's been a great joy and privilege to be pastor here," Malloy said. "I've just learned a whole lot about family life and what is important to people."