By Howard Ludwig |&nbspApril 11, 2017 7:43am | Updated on April 14, 2017 10:34am
@howardaludwig
Twitter Facebook Email More
State Rep. Justin Slaughter (D-27th) is a lifelong resident of Washington Heights. He was appointed to replace Monique Davis, who served the district for 29 years, on Jan. 5.
View Full Caption
DNAinfo/Howard A. Ludwig

Now three months after replacing Monique Davis, Slaughter reflected his brief time in office, his appointment to the job, his past and what he'd like to bring to the sprawling district that includes all or portions of Beverly, Chatham, Morgan Park, Roseland, Washington Heights and West Pullman.

A lifelong resident of Washington Heights, Slaughter said one of his main goals is to become more visible with constituents. He said his 80-year-old predecessor struggled with health issues late in her career, which he believes kept her away from many public events.

But he also believes increased visibility will help him connect residents with state programs and initiatives. Slaughter, 36, also said he plans to make inroads with other area lawmakers to further assist those in need.

Another goal is to reach out to the community to empower them to be part of the solution to the problems facing his diverse district that includes both affluent and impoverished areas.

"Let's take it up a notch," he said of successful areas such as Beverly and suburban Crestwood. As for parts of his district that are struggling, Slaughter said it's important to make incremental improvements.

Slaughter actually filed to run against Davis in the March primary, saying he'd heard the 29-year state lawmaker was considering retirement. Upon learning that Davis was planning to run, he dropped his bid.

"Plus it would have been really hard to beat a 30-year incumbent," Slaughter said.

Slaughter said he continued to make inroads within the community after circulating petitions for Davis' post. But he said he too was surprised to be offered the job, saying he had no contact with Davis ahead of the swearing-in ceremony.

Regardless, Slaughter believes his resume qualifies him for the job. He is a graduate of the University of Chicago Laboratory Schools, his father was a criminal defense attorney for 40 years and his mother worked for three decades with the city's Department of Public Health.

"I've always had a passion for public service," said Slaughter, who stayed in Hyde Park to attend the University of Chicago. He also played basketball for the Maroons. 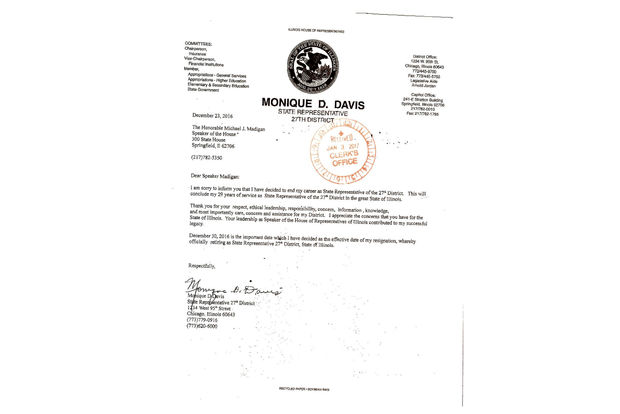 After graduation, he worked briefly as a substitute teacher in Englewood. He described the experience as both "eye opening" and "very humbling" coming from his private school background. In fact, he said the experience continues to have an impact on the way he views the world.

His career also includes work as a legislative coordinator for Cook County. He then held positions with the county's bureau of administration and as a district director for County Commissioner Stanley Moore (4th).

He went on to receive his master's degree in public policy and administration from Northwestern University. Thus far, his work in policy has focused largely on incarcerated youths — which became his focus while working as a deputy director for the Illinois Department of Juvenile Justice.

A Focus On Juvenile Justice

Slaughter ran several programs for this department, including developing a parole system for young offenders. And as a state legislator, he believes the best way to prevent children from becoming criminals is by helping parents, improving education and bringing jobs to poor areas.

"Let's try to get to an at-risk population before they enter into the system," said Slaughter, adding he's also in favor of "sensible gun legislation."

That said, Slaughter admits that the job of being a lawmaker is made even more difficult by the gridlock in Springfield. He pointed to the Gov. Bruce Rauner as a major contributor to the problems facing the state, particularly as it relates to operating without a budget.

"I truly believe no one wants to be the laughing stock of the nation," said Slaughter, echoing the rhetoric of many of his democratic colleagues.

Slaughter said he was aware of the contentious political environment in Illinois ahead of his appointment, but he said some of the banter and reluctance has nevertheless proved disappointing. He also said lawmakers from both sides of the aisle have reached out to welcome him.

"I really have a passion and fire to do this work," he said. "I plan to always be dedicated and committed to the job that is in front of me."