"When April showers are upon us, I'm not thinking spring flowers ... I'm thinking of flooding in Albany Park," said Ald. Margaret Laurino (39th).

Laurino joined Mayor Rahm Emanuel and Ald. Deb Mell (33rd) on Friday for a tour of the construction site of the $70 million Albany Park Storm Water Diversion Tunnel, designed to protect homes from the type of catastrophic event that saw residents evacuated by boat in spring 2013.

"People's lives have been upended and disrupted," said Emanuel, who was the neighborhood's U.S. representative in 2008 when another "100-year" flood hit the area.

The diversion tunnel — 150 feet deep, 18 feet in diameter and approximately a mile long under Foster Avenue — was announced in 2013 and construction began in spring 2016.

According to Rebekah Scheinfeld, commissioner of the Chicago Department of Transportation, the project is on schedule for completion in spring 2018.

"Next spring, we'll have flood diversion in place," she said.

In the interim, CDOT has a wall of sandbags and concrete barriers in place at the most vulnerable areas along the river.

To date, crews have blasted 150 feet down at the tunnel's outlet shaft in River Park, where a tunnel boring machine is now being assembled underground, according to Sonny Jaramilla, the tunnel's on-site project manager for the engineering firm Parsons Brinckerhoff.

Simultaneously, crews have been digging an inlet shaft near Foster and Springfield avenues, on unimproved Park District land. The shaft has reached 90 feet deep and controlled explosions will take place every few days to chip away at the remaining 60 feet of rock.

Following a shout of "Fire in the hole!" Emanuel detonated 120 micro-charges at the inlet shaft on Friday.

Once the tunnel is complete, it will operate on a passive system that makes use of gravity to divert storm water at the inlet during flood conditions and move it downstream to an outlet shaft that will spit the water into the North Shore Channel.

RELATED: What Does An Explosion Really Look Like? Check Out Albany Park Tunnel Blast 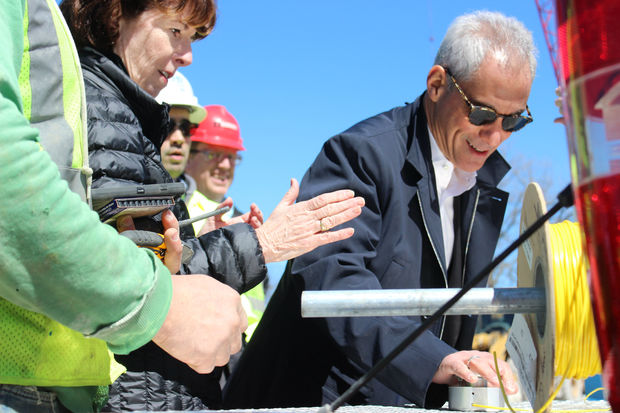 Following a shout of "Fire in the hole!" Mayor Rahm Emanuel hit the detonator button on 120 micro-charges at the inlet shaft of the Albany Park Storm Water Diversion Tunnel. [DNAinfo/Patty Wetli] 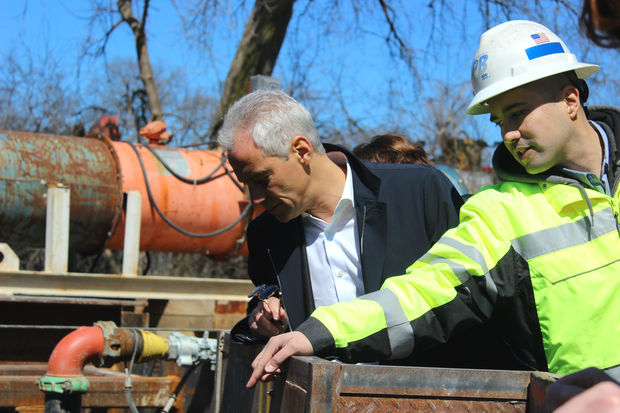