Chicago Is Losing Its Only Waterfall, And Nature Lovers Say Good Riddance

ALBANY PARK — Chicago is losing its only "waterfall" as part of a proposed habitat improvement project along the Chicago River, which was unveiled earlier this week by the Army Corps of Engineers.

That's because the "waterfall" on the west side of River Park is actually a concrete dam. It was built in 1910 by the Metropolitan Water Reclamation District and created a four-foot drop where the North Branch of the Chicago River flows into the North Shore Channel.

For fish, which generally prefer to swim upstream, those four feet might as well be 400, with the dam creating a nearly insurmountable barrier.

Though 35 native species of fish — and more than 70 species altogether — have been found in the North Shore Channel, a survey of the North Branch upstream of the dam revealed a far different story, according to Nick Barkowski, a fisheries biologist with the Army Corps.

Using a technique called electrofishing, which allows biologists to collect fish without harming them, the Army Corps counted just one fish — a little green sunfish — in the stretch of the river between the dam and a footbridge hundreds of feet upstream, Barkowski said.

The plan is to remove the dam and replace it with a series of manmade "riffle" pools — sections where the river will stream over rocks and create movement that mimics rapids.

Work could start as early as winter 2018 and continue through 2020. 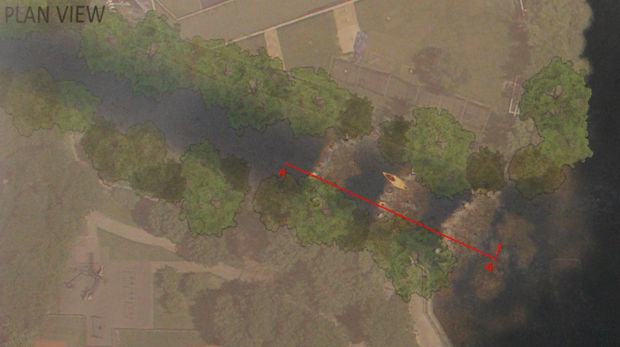 A rendering of the proposed series of riffle pools, which would replace the North Branch dam and make it possible for fish to swim upstream. [DNAinfo/Patty Wetli]

Essentially, the project will trade the dam's single four-foot drop for three one-foot drops, giving the fish a chance to rest and feed in each pool before moving up to the next riffle, Barkowski said.

Under normal river flow conditions, canoes and kayaks would be able to pass over the riffles without the need to portage, he added.

Friends of the Chicago River has been pushing for the dam's removal since 2002, according to John Quail, the organization's director of watershed planning.

With the dam out of the way, fish will have upstream access all the way to the Chicago River's headwaters, Quail said.

Why so much fuss over fish?

Because they're one of the clearest signals of a river's health, Barkowski said, and a river that's healthier for fish is also healthier for humans, other wildlife and plants.

The Chicago River has come a long way from the days of unfettered pollution, to the point where, "It's safe to be in the water from a fall-in-the-river-and-getting-wet perspective," Quail said.

But there is still much to be done in terms of making the waterway more welcoming, both to its inhabitants and humans.

The dam demolition (which includes removal of the concrete pad upstream) is just one part of a broader project dubbed the "River Riparian Connectivity & Habitat Improvement" plan, developed by the Army Corps in conjunction with the Chicago Park District and the MWRD.

The riverbank in Ronan, River and Legion parks would also receive some much needed TLC as part of the plan.

Invasive species have led to significant erosion along the banks, said Jason Zylka, a restoration ecologist with the Army Corps.

"Things are bad. There's a lot of exposed soil falling into the river," Zylka said.

Similar to, but not as extensive as, a project undertaken in Horner Park, the Corps is proposing to remove invasive plants, replace them with native species and create a more stable, gradual slope that would allow people to get closer to the river, he said.

"It will be open and accessible," Zylka said.

The habitat would also be friendlier to birds, pollinators and other creatures, he added.

How much of this vision becomes reality depends on funding, said Lauren Umek, a project manager with the Park District.

The Great Lakes watershed has been recognized as a significant ecosystem by Congress, with federal dollars provided through the Great Lakes Fishery & Ecosystem Restoration program. Local entities are required to kick in 35 percent of a project's budget.

The Corps, Park District and MWRD have committed a "base" amount of money, but it remains to be seen how much bang they can get for their collective bucks, Umek said.

The Corps estimated the project's budget at $5 million to $15 million, but said it would not be more specific, so as not to tip its hand to potential contractors.

The project is expected to go out to bid in September. Once prospective contractors assign costs to each piece of the plan — dam removal, riffle creation, riverbank restoration, etc. — the picture will become clearer, Umek said.

The dam removal, riffle pools and restoration of the adjacent riverbank in River Park are the top priorities, Umek said. 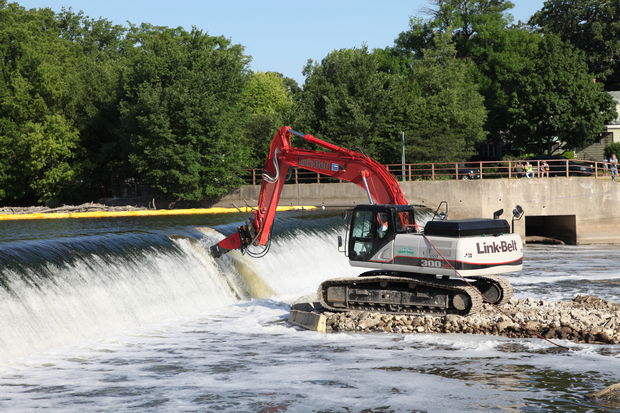 The Army Corps previously demolished the Hofmann Dam on the Des Plaines River between the western suburbs of Riverside and Lyons. [Flickr/Army Corps of Engineers Chicago District]

The North Branch dam and an example of riffles created by the Army Corps. [Army Corps of Engineers] 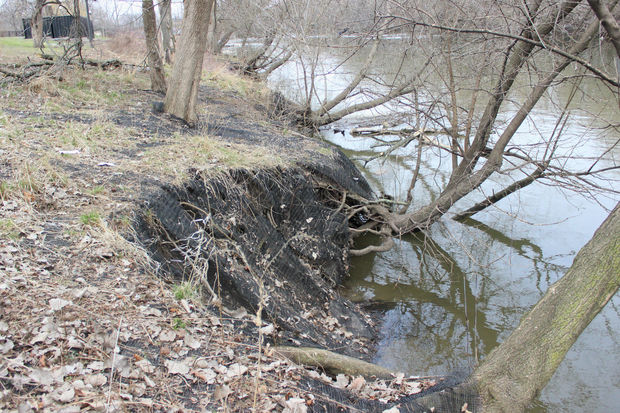 Current riverbank conditions and an example of the Army Corps work in Eugene Field Park. [Army Corps of Engineers]