In the same way that Dyson channeled his frustration into the creation of a revolutionary bag-less vacuum, students from Amundsen High School are doing what engineers do: identifying a problem and designing a solution.

The teens brought their product prototypes — among them, an organizer for all that stuff in the bottom of their backpacks — to Dyson's Near North Side headquarters this week for a mini design competition.

As Dyson employees circled the projects on display, ticking off boxes in a judging rubric, the students explained their work.

Junior Lorenzo Geronimo showed off his "Lazy Worker," a lap desk for laptops that includes drawers and a cup holder along with a curved shaped to fit over a body working in  bed.

"It has to be light, it also has to be efficient," Geronimo said.

Jason Garcia brought his portable iPhone speaker, crafted from a paper towel tube and water bottles, and Angelina Sergis demonstrated the evolution of prototypes of her roll-up storage case — meant to hold pens and pencils, makeup brushes or tools.

She'd started with t-shirts and shoelaces and upgraded to elastic and a sturdier fabric.

"I had to modify the product for its use," Sergis explained.

The entire scenario would have been unthinkable a year ago, because in its nearly 90-year history, Amundsen, at 5110 N. Damen Ave., hasn't been equipped to offer engineering and design courses.

"There's been a rapid change in how we look at the role of technology instruction in developing college- and career-ready students," said Amundsen Principal Anna Pavichevich. "A normal part of education should include engineering and technology, and that's not something we've had."

That changed in 2016 when the high school was announced by Mayor Rahm Emanuel's office as one of three recipients — along with Disney II Magnet and John Hancock College Prep — of a $150,000 grant from Dyson, enough to outfit a lab with laser cutters, 3-D printers, scanners, computer-aided design software and other tools.

"The mayor put his trust in Amundsen students and teachers," said Pavichevich. "He knew we would maximize this opportunity. Every opportunity we have, we seize it."

A team from Dyson trained a core group of the school's math and science teachers — Aleksandar Rusic, Eman Sarhan and James Stoll — on the equipment last summer.

"The biggest challenge was creating the curriculum," Rusic said. "Here's the equipment — what do we do with it?"

Dyson played an advisory role, helping the educators devise a student experience that would reflect an actual engineering environment.

"It's not about just giving schools the machines," said Jenna Blanton, who heads up the James Dyson Foundation in North America, the company's philanthropic arm. "It's about giving them professional development too."

In the fall, Amundsen debuted an engineering elective to juniors and seniors. For the first time, students are now able to take theoretical concepts learned in math and science classes and apply them to real-world situations. 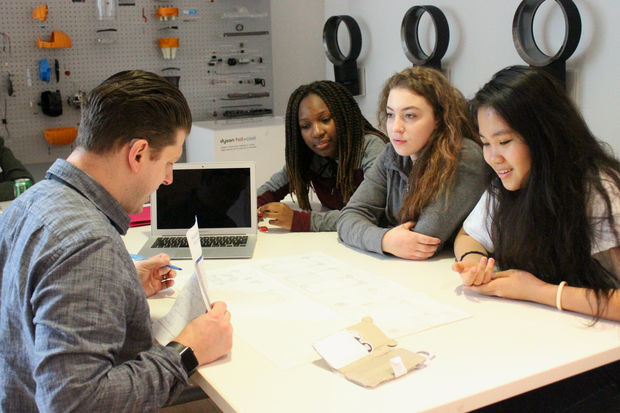 There have been plenty of misfires and failures, by both students and staff (remember, the lab is new to them too), but that's all part of the engineering process, Rusic said.

"It's very unpredictable," he said. "Every day is new. We're learning by doing."

The teachers have been energized by the enthusiasm of their students.

"When the students get excited, you feed off of it," said Stoll.

Students said the hands-on nature of the class was a major draw.

Classmate Benjamin Kellmendi agreed: "You don't just sit down and do worksheets and take notes. It frees the mind."

The collaborative aspect of engineering was something students also said they enjoyed.

Senior Tooba Salman, who plans to study architectural engineering at the University of Illinois-Chicago, said, "The best thing is we all learn together, like a family."

Even for students like Salman, who was already interested in engineering, exposure to the scope of what the profession encompasses was eye opening.

Senior Aleksandaros Papvangjeli said, "I didn't know they had to make prototypes." (Indeed, Dyson famously made 5,127 of his vacuum.)

Instead, he and his fellow students learned how to sketch blueprints, create scale models, test prototypes and head back to the drawing board when problems arose.

Having successfully rolled out its first engineering class, Amundsen is now making plans to expand access to the lab to every student in the school, Pavichevich said.

Picture a history class studying ancient Rome or Greece. The coursework could include a week in the lab, building aqueducts or the modern equivalent of the Trojan Horse, she said.

"It's one more opportunity to ignite passion [in students] and explore hidden talents and capabilities," said Pavichevich.

In fact, the lab's influence is already seeping out into the school's general student body.

A group of freshman girls — Briyonce Martin, Karolina Meres and Nhi Nguyen — started hanging out with Sarhan in the lab during their lunch period.

Martin said she had wanted to be a doctor but now she likes engineering more. "It's fun — taking stuff apart and putting it back together," she said.

The trio were aware of the upperclassmen's Dyson visit ahead of time and decided to get in on the action.

"We were just brainstorming, all just throwing ideas at each other," Meres said.

They came up with a cellphone case that doubles as a wallet and has a tab that fits around a charging "cube" to keep the phone off the floor.

Guess who won the Dyson competition?

"How do you know what to become if you don't know the options?" said Dyson's Blanton.

A Look Inside Amazon's First Brick-And-Mortar Bookstore In Chicago