DOWNTOWN — Chef Rick Bayless closed four restaurants Thursday as his workers joined a "A Day Without Immigrants" in Chicago.

Bayless' move to close Frontera Grill, Topolobampo, Xoco and Fonda Frontera Thursday came as immigrants across the U.S. stayed home from workplaces and classes Thursday in an effort to show how important immigrants are to America's economy.

The celebrity chef said the closure is out out of respect for his staff's vote to support Thursday's immigrant civil actions in Chicago and elsewhere. About 200 employees work at the four restaurants, a representative confirmed.

"For three decades, we’ve been a place that has welcomed, respected and promoted our immigrant staff, friends and restaurant family," Bayless wrote in a statement.

Cruz Blanca and Leña Brava, Bayless' newest West Loop restaurants, remained open Thursday, and 10 percent of revenue will be donated to the Illinois Coalition for Immigrant and Refugee Rights.

The host stands at each of Bayless' closed restaurants called guests to notify them of the closure and offered to accommodate them at Leña Brava or rebook them for a future date. About 50 reservations were canceled.

"Some people were disappointed but overall everyone was very understanding and supportive," a Bayless spokesman said Thursday evening. "There were a couple guest who were implacable, but overall it's been overwhelmingly positive." 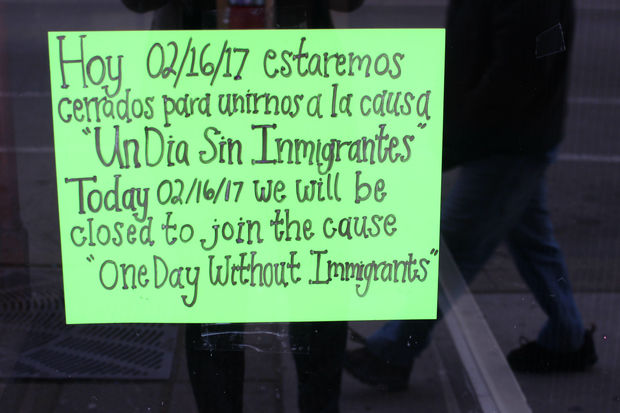 "My whole staff asked me not to work. There are a lot of Latinos in the city who want to be part of the movement," said Perea, whose bakeries are located in two majority Latino neighborhoods. "As an owner, it's not the best feeling, but I have to understand where they are coming from. I have to support them."

"It's a bigger issue than just, 'We're being targeted,'" said Esparza, who was born in Mexico. "When you talk about race, you're talking about me."

Jaime di Paulo, executive director of the Little Village Chamber of Commerce, said concerned Little Village business owners were calling him Wednesday for advice, but he urged the businesses to stay open.

Also Thursday, Arise Chicago and other immigrant rights groups protested deportations in Union Park and marched through the Near West Side to Federal Plaza.

"A Day Without Immigrants" actions are also planned in cities including Philadelphia, Washington, Boston and Austin, Texas, according to the Associated Press.