ALBANY PARK — Families facing eviction from an Albany Park apartment building are taking a stand against gentrification and what they say is discrimination.

Residents of 4815-21 N. Christiana Ave. rallied Monday to protest against landlord Silver Property Group, which bought the 25-unit courtyard building last year and has given tenants until the end of the month to vacate their homes.

Ron Abrams, principal and managing broker for Silver Property, said tenants must leave because extensive renovations are planned for the building, including upgrading its plumbing as well as its heating and air conditioning systems.

"Staying is not possible" while renovations are in progress, Abrams said.

For Patricia Cano, it's the second time in less than three years that she's been uprooted by Silver, having moved to Christiana after being evicted in 2014 from a Silver-purchased property at 3001 W. Lawrence Ave.

"I'm sad I'm back again in this situation," Cano told DNAinfo through an interpreter.

Cano is most concerned about the stress on her 10-year-old daughter, who has asked, "Why are they kicking us out again?" she said.

Unlike the Lawrence Avenue building, where there were issues with gang members and serious neglect, Christiana is "very calm," she said.

"This is not a problem building, and these are not problem tenants," said Eric Filson, a homeowner who lives next to the apartments.

Marlene Wagster, a 20-year resident of the 4800 block of North Christiana, said she's grown attached to her neighbors' children, whom she described as "always smiling."

"I could just cry," Wagster said. "Where are they going to go?"

That's the question facing Luis Garcia, who has lived in the building for six years. He and his wife and their two children, ages 6 and 2, rent a studio apartment for $700 per month. Like Cano's daughter, Garcia's oldest child attends nearby Hibbard Elementary, and both sets of parents want to provide stability for their youngsters during the school year.

Garcia said he hasn't been able to find another apartment in the area for a similar price.

"It seems like rents are getting really expensive," he said through an interpreter.

"I respect and understand this is a business. You can still treat people fairly and just," Garcia said. 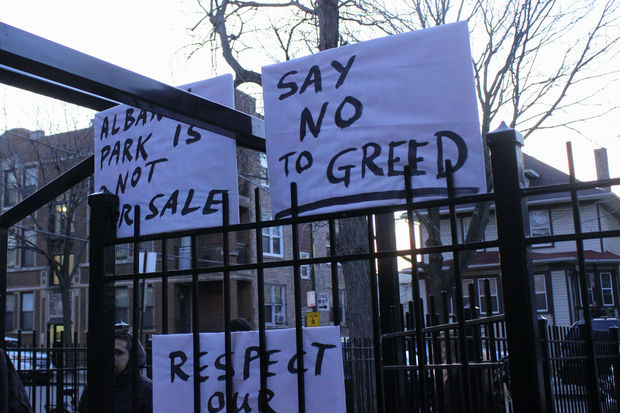 The Autonomous Tenants Union has helped to organize the tenants, and the nonprofit Community Activism Law Alliance is pursuing legal action on the tenants' behalf.

"Enough is enough," said Alejandro Monzon of Autonomous Tenants Union. "We are fighting against the gentrification of Albany Park.... No evictions, no rent hikes, no displacement. Albany Park is not for sale."

Chad Baker of the law alliance said he is investigating possible racial discrimination claims, given that all of the tenants at Christiana are Latino.

"Our hope is they'll negotiate," Baker said of Silver Property.

Abrams said allegations of discrimination against Silver Property are "completely false and untrue."

He added that he has offered to meet with tenants individually "to see how I can help," but they have opted for collective action.

Silver bought the building because its location near the Kimball Brown Line station made for a smart acquisition, even though it needs work, Abrams said.

Indeed, tenants said that the previous landlord ignored problems like mold, peeling paint and rodents — issues they said Silver has failed to address. Abrams countered that none of these complaints have been filed with Silver, either through its online portal or with its maintenance staff but rather have only been reported to the media.

He said he met with a group of tenants months ago and they presented him with a letter stating their desire to remain in the building.

"I get it," Abrams said of gentrification accusations.

Back in the 1980s and '90s, development swept through Lincoln Park and Lakeview, and now neighborhoods like Logan Square and Albany Park are becoming increasingly attractive to wealthier buyers and renters.

"This is a tough topic," Abrams said.

"This struggle ... is a battle for the future of our community," said Monzon. "We are here to stay." 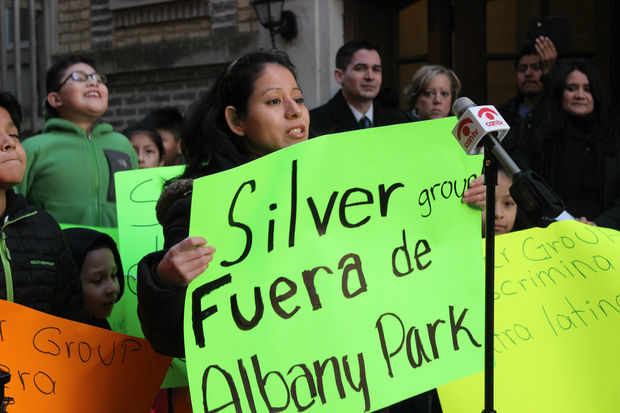