But the holes are all there for a reason, according to the ceramicist who has lived in Beverly since 1985.

Each pot represents a state, and each hole in the pot represents a fatal police shooting that occurred there in 2015. Hanging from the holes are name tags for the deceased, which also includes their age, gender and race.

On the back of each name tag is the date each person died, and how they were killed. The pots are divided into sections based on the racial composition for each of the six states and Washington, D.C. that Liddicoatt has chosen for her project.

The names are placed in the corresponding section of each pot and are arranged from bottom to top with those killed in December near the lip of the pot and those killed in January at the base, Liddicoatt said. The clusters of nametags on each pot depicts the disparity of shootings as it relates to minorities.

A retired director of teacher certification at Chicago State University, Liddicoatt said her efforts are driven by "the anger and frustration over these killings." 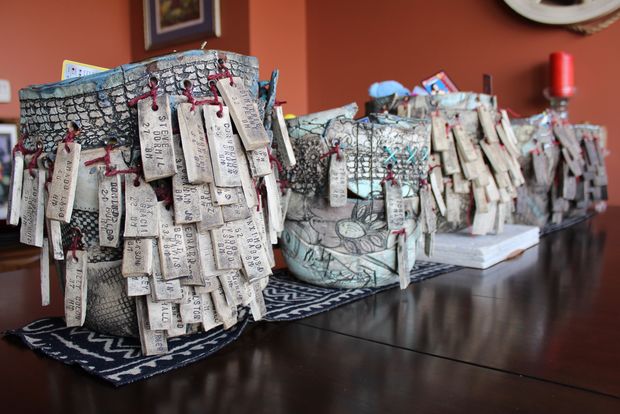 Ceramicist Dawn Liddicoatt describes her handmade slab pots as "lynch pots." Seven of these pots will be on display in Hyde Park and depict various states. The charms on each pot feature the names of individuals killed by police in each state. The tags are strategically placed on the pots to show the racial discrepancies of the fatal shootings. [DNAinfo/Howard A. Ludwig]

Her pots will be on display along with the work of Beverly quilter Dorothy Straughter and Gage Park collage artist Terry Rudd at the Hyde Park Art Center, 5020 S. Cornell Ave. The three women are part of a show called "Bearing Slavery's Scars."

The show opens at 2 p.m. Sunday. The show is free, and the artists believe their work will spur conversation about race relations in America.

"My hope for this exhibit is that it will cause us to look more closely at this epidemic of police killing and the environment that cultivates it," said Liddicoatt, who raised her three biracial children in Beverly.

Her pots represent fatal police shootings in Florida, Illinois, Maryland, New York, Ohio, Texas and Washington, D.C. Liddicoatt started working on the pots in January 2016, and the name tags are all bound to the pots with colorful pieces of thread.

On the inside of the pot — tied to each thread — are pacifiers, small children's toys, Pokemon cards and other trinkets. The idea behind this part of the work is to remind observers that those killed "were all innocent when they came into the world," Liddicoatt said. 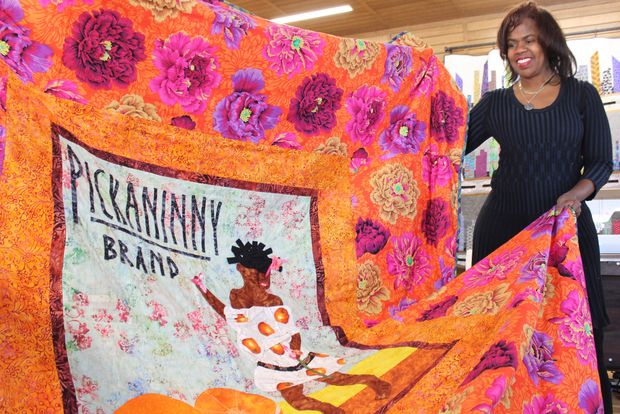 This quilt from Beverly's Dorothy Straughter shows the marketing campaign for the picaninny brand of oranges. A poor black girl was the mascot. Straughter purchases all the material for all of her quilts at The Quilter's Trunk in Beverly. [DNAinfo/Howard A. Ludwig]

Liddicoatt pots are the impetus behind the upcoming show. And the artist believes many of those killed by police were, indeed, innocent at the time of their death, "and even if they weren't, that does not justify killing them," she said.

Liddicoatt invited Straughter to join her as her work also touches on racially delicate topics. Straughter plans to bring four quilts to the show, including one that shows a lynching.

"On the one side you see this beautiful tree. And on the other side, you see how this tree was used," said Straughter, who has earned a reputation for her quilts depicting the history of blacks in America.

Another quilt that will be displayed in Hyde Park offers a glimpse of the path of the transatlantic slave trade from Africa to America. The other side of this same quilt features patterns that some believe offered subtle clues along the path of the Underground Railroad.

Straughter's two other quilts that will debut at the show feature images from Hollywood along with advertising campaigns that used black children. These pieces of negrobilia include ads for pickaninny — a fruit company — and a depiction of Buckwheat.

"This show is intense. My goal is to deal with this intense part of our history and go into how we can cooperate with each other," said Straughter, who is also working to coordinate a show with Liddicoatt in April at the Beverly Arts Center. 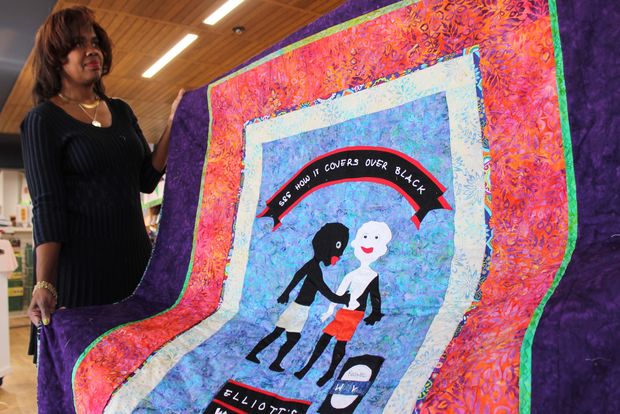 Dorothy Straughter's quilts tackle black history in America. This quilt shows an advertising campaign for a paint company that used two black children, one of which is painting the other white. [DNAinfo/Howard A. Ludwig]

Straughter said her quilts are often disarming, as the medium is more often used to showcase colorful patterns and fabrics. Her take on quilting relies on these warm feelings to introduce difficult topics.

"That is what it is meant to do — make you pay attention and push that conversation forward," Straughter said. "We need to tell the truth, no matter how rough it is."

As for Liddicoatt, she had planned to make a pot for all 50 states, but that project proved daunting. Depicting fatal police shootings in California alone would have required a massive pot with 211 name tags. She'd still like tackle that pot and others but is looking for help to do so.

She mostly focused her efforts on states where police shootings were in the news. And she's planning to make at least one more pot to represent these killings in Illinois in 2016. After that, she wants to move on to another project, perhaps tackling the disproportionate incarceration rate among black men.

"I wouldn't say [the pots] are anti-police. I would say it's a visual representation of what's been happening across the country," Liddicoatt said. "For some, the pots will be a validation of what they know. For others, who don't want to believe these killings could be racist, maybe this visual will open their eyes."