ROSCOE VILLAGE — With her sleeve rolled up, bicep flexed and hair tucked under a red polka-dot bandanna, Rosie the Riveter has long been a symbol of the women's movement in the U.S.

Swap out the bandanna for a hijab, the traditional head covering worn by some Muslim women, and is Rosie any less empowered? 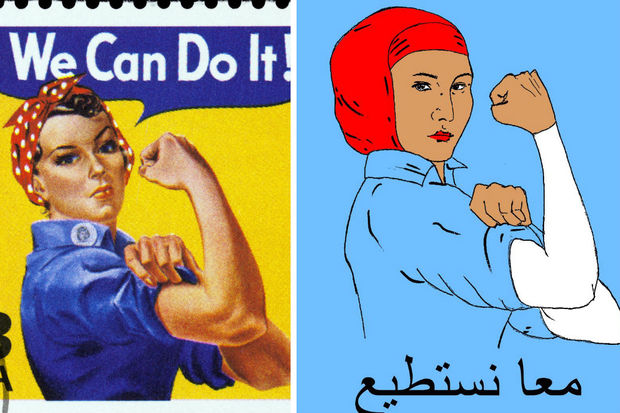 No way, said Malak Afaneh, a Chicago high school student who came up with the concept of putting a hijab on the iconic image in the feminist poster and printing T-shirts for classmates.

"People think women in Islam are not feminist," said Malak, 17, but her personal experience has been the opposite.

Malak, a senior at Lane Tech College Prep high school, began wearing a hijab when she was 12 and said, "It made me a stronger feminist."

"It's who I am ... someone who is proud of her culture," said the Jordanian-American.

Often linked to misconceptions of Muslim women as subservient, the hijab is one of the most visible identifiers of a person of Islamic faith, which can make its wearers targets of xenophobia, Malak said.

She said she hears stories every day of women wearing the hijab being told, "Go back to your country."

Malak herself was standing at a bus stop at Western and Montrose, speaking Arabic to friends, when a woman muttered, "ISIS is everywhere."

In response to prejudice and hate speech, Malak was inspired to put a new spin on the classic Rosie image, one that would depict the "beauty of Islamic feminism and the need to make all Muslims feel secure and loved within the United States," she said.

Malak could picture the design she wanted clearly in her head, including the phrase "Together We Can" written in Arabic, but she had a slight problem — she can't draw.

She turned to classmate Gabriel Franco to translate her vision.

"I told him, 'I have this idea,' and he did it perfectly," Malak said.

Her teachers at Lane Tech made the school's screen-printing equipment available before and after school, and with the help of friends, Malak inked 130 T-shirts with the image. They finished printing, coincidentally, the same day President Donald Trump signed an executive order that banned travelers from seven predominantly Muslim countries.

Word spread among the school's students and staff, and Malak quickly sold out of the $10 shirts.

"It shows Lane is a safe space," said Malak, who lives in Irving Park.

Two dollars of each sale covered her costs, and the remainder — $1,210 — was earmarked for the National Zakat Foundation, a Muslim-run charity that aids refugees and other vulnerable people.

For Malak, the Syrian refugee crisis hits close to home. For the last several years, she's spent her summers in Jordan, where she volunteered at refugee camps, helping some of the millions of Syrians who poured across the border into Jordan as well as Lebanon.

"Some of these families used to be average middle-class," Malak said. "Now they're left with nothing but a tent."

Still, she found a powerful sense of community in the camps.

"They took me in like their daughter," she said. 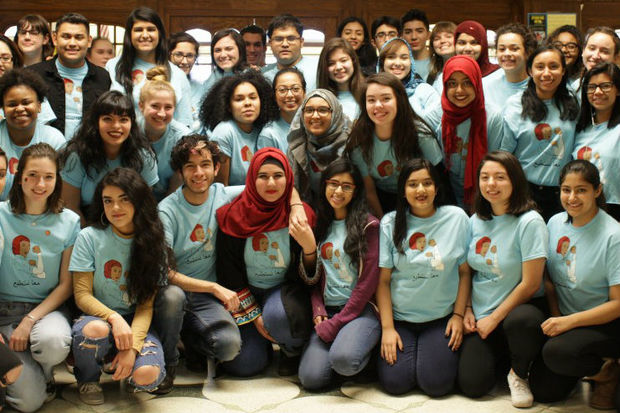 Malak is working to make her design more broadly available, and if a T-shirt emblazoned with a hijab-clad Rosie sparks conversation or makes Muslims seem more approachable, Afaneh's mission will have been accomplished.

"People take one look at the scarf and they turn away," she said.

"I'd love for you to know who I am," Malak said. "I definitely appreciate it when people ask me questions. They want to be educated. ... They want to get closer."