CHICAGO — Dion Madkins' introduction to golf was as a 12-year-old caddie.

Though he didn't last very long at the private golf clubs where he worked, he credits the game with showing him the way out of the rough when he was "a troubled youth."

Before getting back into the sport, he was facing jail time for drug dealing, but golf, along with the arrival of his first child, made him a better decision maker because he began to think about the long term instead of instant gratification, he said.

"In order to get good at the game of golf, you really have to dedicate yourself. It's a thinking man's game," he said.

Even the length of the game is a plus, he said. "The average round of golf takes four to 4½ hours. That’s four to 4½ hours that I was spending with no mischief … with no trouble ... no negative influences," Madkins said.

Now, the Woodlawn resident and founder of the Hit It Straight Golf Academy believes it can help other young black men in the city in need of direction. All it takes is an opportunity, he said.

And Madkins sees that opportunity ascending like a sunrise over the Jackson Park golf course, which, along with the South Shore course, is slated for a $30 million merger and renovation.

"That’s the heart of the South Side," Madkins said. "It would bring opportunities, as far as caddie programs, where you can go get an everyday normal kid, bring him to the golf course, teach him etiquette, show him how to talk and keep his pants pulled up."

In December, city officials announced Tiger Woods' TGR Design would take the lead in remaking the two lakefront golf courses into a course capable of hosting such PGA Tour events as the BMW Championship.

But the project already has drawn criticism from community members and park advocacy groups concerned about early contracts being awarded without community involvement.

Driving without a tee

About an hour southwest of Jackson Park, Madkins shuffles then sets his feet to find his balance before lofting a golf ball deep into the dome-covered driving range.

It's a rainy January morning in south suburban Frankfort, and save for his friend/student in the hitting section, everyone practicing their game is twice his age and most likely retired. Under 40 and black, he sticks out, but he's grown accustomed to it now.

As a caddie at Ravisloe Country Club in south suburban Homewood though, being different turned him away from the game.

"I didn't see any of my people in [golf], so I strayed away from it," he said. "I didn’t have any guidance on the golf course." 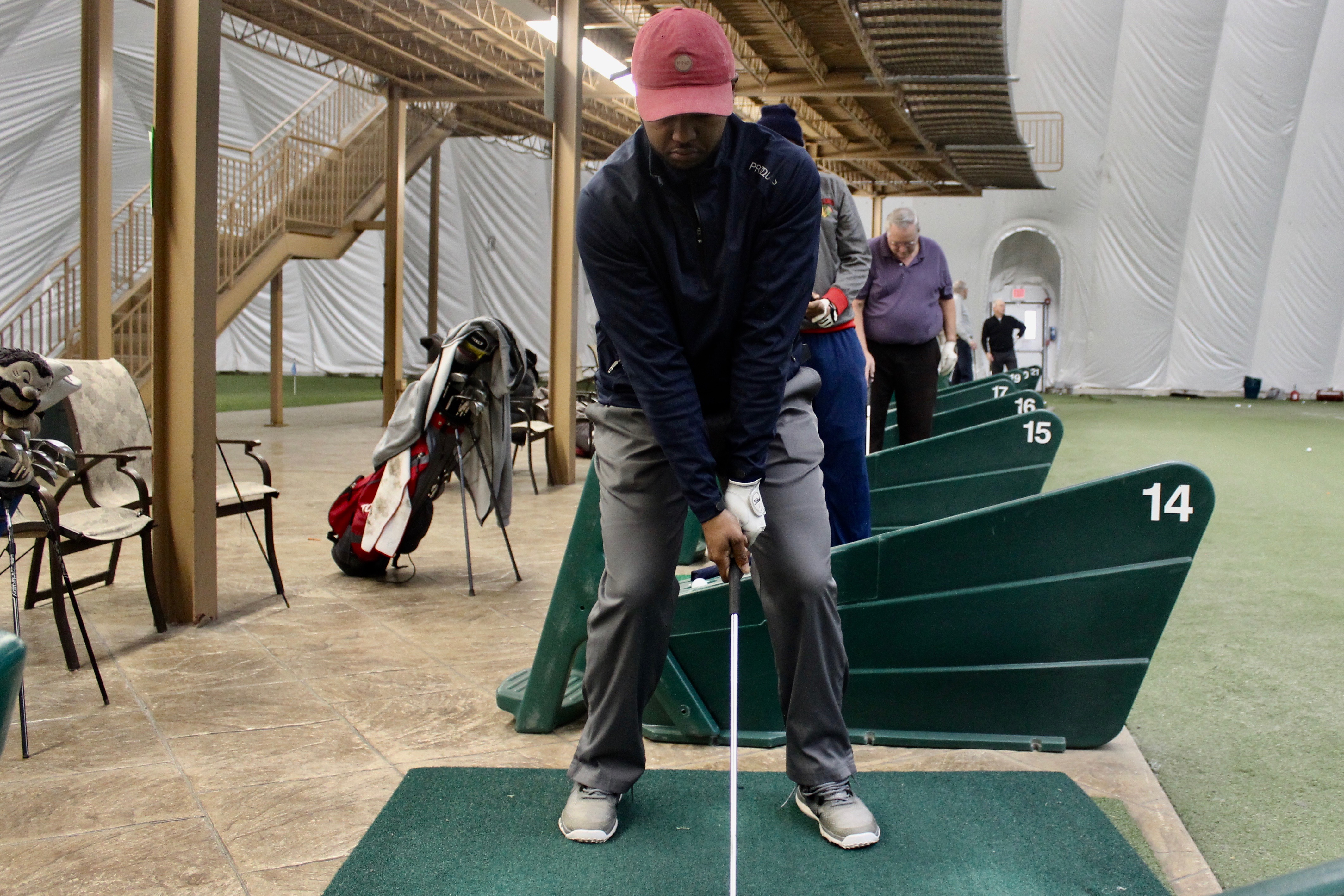 The parking lot of Ravisloe was full of foreign cars and its members were old, wealthy and white. He was a young black kid from south suburban Robbins, where 90 percent of the population is black and the average household income is around $33,000.

While the folks playing didn't resemble him, he did see things in the game that resonated with him.

"I saw wealth. I saw honesty. I saw integrity. I saw a game that's competitive," he said.

As a teen, he moved away from golf and Robbins to Oklahoma, where he played basketball and football while attending Putnam City North High School. But returning here later, he gravitated back to golf when, as he put it, "I got into some trouble."

His teen years were marred with trouble from dealing drugs to associating with gang members, he said.

"You name it, I did it — anything that was bad that you could get into to make a quick buck," he said.

Eventually, chasing fast money caught up with him, and he found himself looking at jail time after getting caught with "a lot of heroin," he said.

While he admits it was the wrong decision, he also understands why drug dealing appealed to him and still appeals to some young people now.

"It was an opportunity. It was there for me. It was presented for me. Every day I walked outside of my house there was someone standing outside selling narcotics. And they were profiting," Madkins said.

Chipping from the rough

He was arrested but since it was his first time in significant trouble, he escaped jail time and was placed on probation.

That's when his uncle got him a job cutting the greens, fairways and tee boxes at Joe Louis Golf Course in Riverdale.

At first, "I just wanted to get my paycheck and go," Madkins said.

Then, he found a golf club on a fairway and began practicing. The job also introduced him to "very accomplished golf strikers," who looked like him and supported him, he said.

"They began to let me know that I did have a natural golf swing and if I tried to perfect it I could go places with the game, and I dug into it more," Madkins said.

From 6 a.m. to 2 p.m., he would cut the greens at the course. Then he clocked out, grabbed a water and fruit for lunch. By 2:15 p.m., he'd be back walking the course and working on his game until he closed the gates at night, he said.

"I repeated that process for two years. Rain, sleet or snow, I did something golf-related," said Madkins.

The attraction to the game, said Madkins, is that the player is ultimately responsible.

When Newman was no longer able to work at Klees, Madkins took Newman's spot. He also became a golf instructor.

"I went out on a limb; I printed out some business cards. I figured if I could teach myself to play golf and get my handicap down to a single digit, I could teach anyone," Madkins said.

About three years ago, Dennis Minefee, who plays golf at Florida A&M University, ran into Madkins at Klees and a bond grew. Through a few rounds of golf, Madkins helped the Division 1 college golfer improve his game, he said.

"He gave me some swinging tips and helped fine-tune my game," said Minefee, 21. "He's a superb fellow and very caring. He's a very positive influence for anyone."

In 2013, Madkins partnered with a friend to introduce 40 kids from Robbins to the game through the Hook a Kid on Golf program.

The program created by the National Alliance for Youth Sports aims to make golf as accessible for kids as football, baseball, soccer and basketball. The effort strives to eliminate obstacles that discourage kids from playing "while instilling in them an understanding of golf's rules, etiquette and history," according to its website. 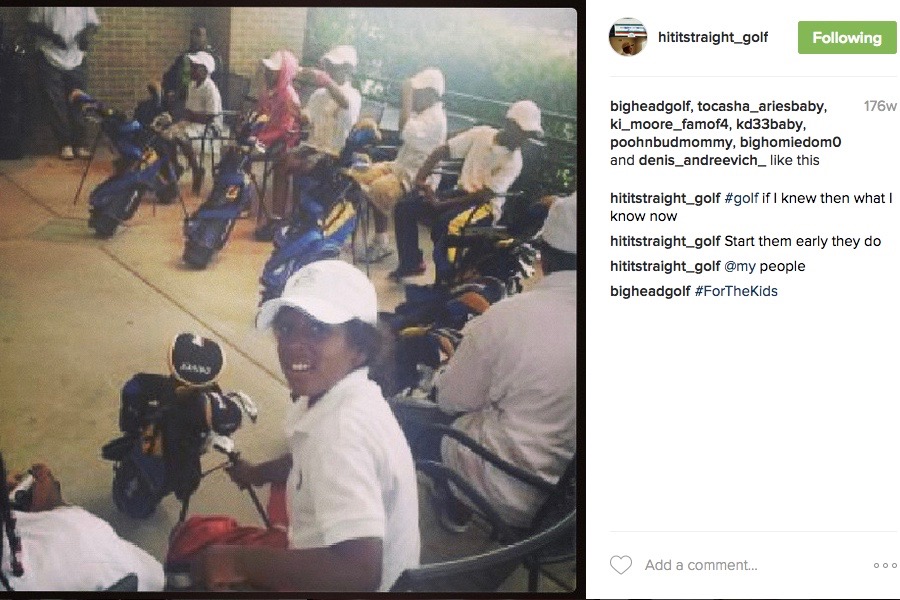 Children in the program received a hat, shirt, golf bag and set of golf clubs. They also received transportation to a golf club, lunch and coaching for a week, Madkins said.

Kids often ask him how they can get involved, with some wondering if they're too old, he said.

"They’re totally ignorant to the fact [they] can play golf," he said. "It's time for us to put some effort behind piquing their interest."

Roger Steele, a local amateur who competed in the 2015 World Long Drive Competition, met Madkins in 2015, though he had heard about Madkins from the golf community for years.

Madkins, a coach now for seven years, gave Steele tips on his swing.

"When I would miss things, he would find them," Steele said. "He's really passionate about the game of golf and using it to change lives. Not only his, but others."

Madkins has been working on getting funding for the Hit It Straight Golf Academy for about a year. The not-for-profit organization would focus on reaching young African-American men, making the South Shore golf course the perfect headquarters, he said.

They’re the ones I’m seeing every day on the TV killing each other, so my emphasis is on them," he said. "Golf is a sport [that is] lacking African-Americans, and I’m trying to get us involved."

Madkins has attended several community meetings about the course and understands the view that others are just "putting it in our neighborhood" without really partnering with area residents and groups.

"If they don’t let us affiliate with it, and run programs through it, and do our thing through it, that’s what it would be," he said.

Madkins said he has been working with developers and the Chicago District Golf Association.

"These guys have brought me in to ask my ideas, ask what I have going on and to bring me in to be a part of what’s going on because I see something bigger for our children than death on Channel 7 news every morning," he said.

Steele moved to California a few months ago but has been watching developments at the South Shore course closely.

"I think it's really exciting and can bring a lot of opportunities, but that's only if it is done right," Steele said of golf course revamp.

A lot more work than just renovating the South Side courses must be done to make golf accessible for inner-city kids, but if anyone can be the "ambassador" for that it's Madkins, Steele said.

"It's a lot more than one man can do, but that's his goal, and he's going to do his hardest to do that," Steele said.