RAVENSWOOD — The library at the fictional Litchfield Penitentiary is so integral to the Netflix prison dramedy "Orange Is the New Black" — itself based on a prison memoir — that there are websites devoted to tracking the books the characters read and reference on the series.

The reality is that prison libraries tend to be poorly stocked, and inmates' access can be limited to as little as a half-hour a month, according to Vicki White, president of the volunteer-run Chicago Books To Women In Prison.

After enjoying a brief golden age in the 1940s and '50s, when the concept of "bibliotherapy" or "curing" inmates through reading took hold, prison libraries have been in decline since the 1970s.

"Books are treasured by people in jail. They provide so much entertainment, enlightenment, self- improvement and self-empowerment," said White, but "funding libraries in prisons is not a popular legislative item." 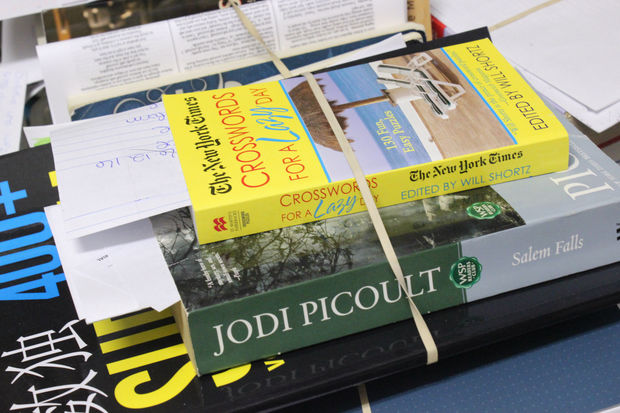 Books bundled for an inmate. Women typically receive three at a time. [All photos DNAinfo/Patty Wetli]

Dozens of books-for-prisoners nonprofits have cropped up across the U.S. to fill the void, but the Chicago organization, formed in 2002, is one of only two in the nation devoted exclusively to female inmates. (The first, Women's Prison Book Project, was founded in Minneapolis and coordinates its efforts with Chicago.)

There are "some unique needs of women in prison compared to men," White said.

A significant percent of female inmates are mothers of minors, and they were living with their children immediately before incarceration. As a result, books on parenting are one huge request from female inmates. So are children's books, which women ask for to read to their children during visits or to give as gifts, said White.

Books on women's health, both physical and mental, are also among those in the greatest demand.

During a 2016 focus group with inmates at the Logan Correctional Center, one of the state and federal prisons served by Chicago Books in 12 states, White learned that her organization is often the most reliable source of medical knowledge for incarcerated women.

"People are given medication, but they're not given any information on what side effects to expect. So we often get requests for books like that," White said.

As the prison population ages, White said she's seen an increased need for books in large print and on topics such as menopause.

Without internet access, inmates turn to books as a low-tech resource, which "just underlined for us how important it is, what we're doing," said White, who lives in Irving Park.

Chicago Books To Women In Prison keeps a binder full of thank-you notes from inmates.

Chicago Books To Women In Prison is based out of the Ravenswood Fellowship United Methodist Church, 4511 N. Hermitage Ave., where its stacks of books — all of them donated or traded — occupy several rooms.

The operation resembles a particularly eclectic indie used bookstore, albeit one in which copies of "Divergent" share space not only with Dickens but "Best Resumes & Letters for Ex-Offenders." The "Harry Potter" series has its own shelf, and a separate storage area had to be created for GED study guides, which arrived en masse over the holidays courtesy of a wildly successful "Giving Tuesday" book drive.

Every Sunday afternoon, Chicago Books volunteers gather to process the 50 to 100 letters that arrive from across the country, many of them penned in careful handwriting on notebook paper that is itself a precious commodity in jail.

"My first day here, there was one letter that was two pages front and back," said volunteer Akanksha Jayanthi of Humboldt Park.

"It was a very personal letter. You get a sense for how much they appreciate this," said Jayanthi.

Should she or any of the other volunteers doubt the value of their mission, there is a binder of thank-you notes from prisoners to remind them.

"We really feel loved when someone on the outside expresses care and love for us. I love to read, and to receive free books is truly a blessing."

With the exception of GED prep books, which are uncommonly heavy, and blank journals, which don't qualify for bulk "media" mailing postage, books typically are bundled in packages of three to a woman — to the tune of nearly 4,000 packages in 2016 on a shoestring budget of $25,000 — and shipped individually, per prison regulations.

Volunteers pull books from the stacks that best match each woman's request, most of which simply state general areas of interest.

"The best letter I ever got said, 'Please send me something else by Alexander Dumas. I loved 'The Count of Monte Cristo,'" said Seyburn.

The 67-year-old writer added that she had read enough to know a good author when she came across one, Seyburn recalled.

"I like that these books are having a second life going somewhere to someone who really wants them," she said.

"I want you to know you have made my stay here easier and I thank you for that."

"Any genre or sub-genre that exists, we have a request," said Hilberg, who lives in Logan Square. "It's nice that we don't make any judgment about what we send. Anything they want to read, we send."

(There are restrictions, White noted, including "anything with a gun on the cover" or involving drugs. Hardcovers also are prohibited.)

Women have asked for specific books on everything from blueprint-reading to how to do origami to how to draw trains.

That last one came from a woman who used the book to help her create an illustration of a diesel engine for her locomotive-obsessed son's fifth birthday card, Hilberg said.

"It's so rewarding to have such an unusual request and say, 'Here you go,'" she said.

"Thank you for being dedicated to such a life-enriching cause. Being where we are, we are not often recipients of such kindness and generosity. It is almost too good to be true!"

The majority of Chicago Books volunteers — White estimated there are 20 to 25 regulars — are themselves voracious readers who believe in the power of the written word to not only provide escapism and fill empty hours, but to rehabilitate.

Hilberg, a former CPS teacher, said, "It feels a lot like I'm continuing my work in education. It's hopeful to see how many people are trying to help themselves."

Click here for more information on volunteering with Chicago Books To Women In Prison (Saturday sessions are being added) or how to donate books. 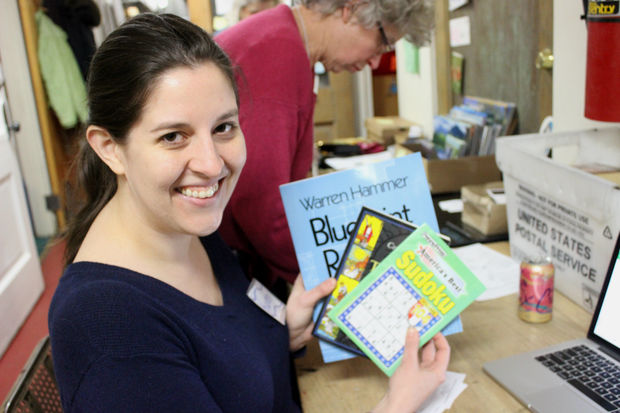 Volunteer Karen Hilberg created a database for special requests, like a book on how to read blueprints. 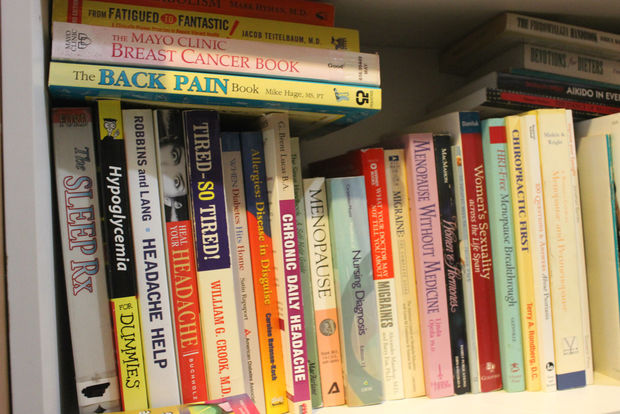 Books on women's health are in high demand. 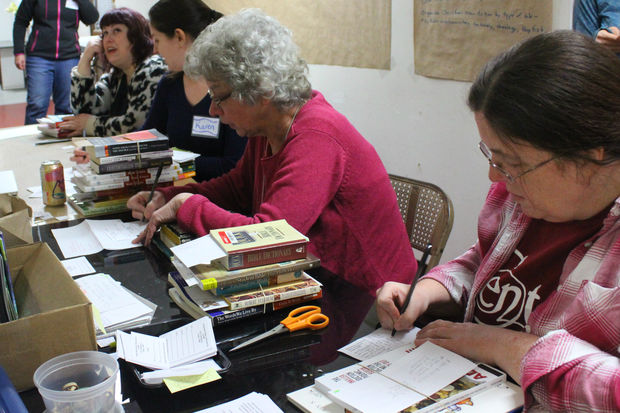 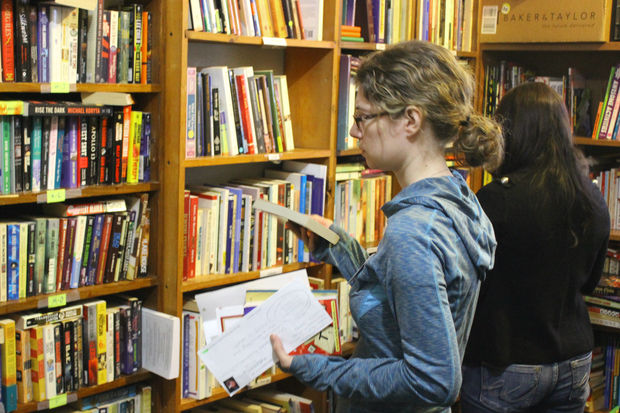 Volunteers "shop" the stacks to find matches for inmates' requests. 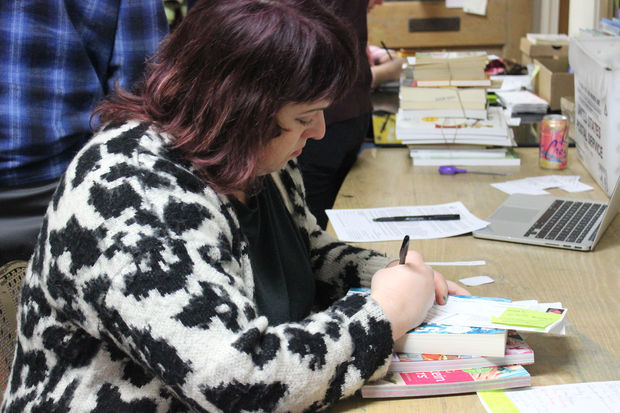 Volunteers often include short notes with the books, sometimes as simple as, "Enjoy."