His Third-Grade Teacher Urged Him To Write A Book; 12 Years Later He Did

By Howard Ludwig |&nbspDecember 30, 2016 6:32am | Updated on January 2, 2017 8:57am
@howardaludwig
Twitter Facebook Email More
Polly Kelly was a student teacher at Barnard Elementary School in 2005. She worked with the third grade class, including Javis Jones. He transferred schools the following year, and Kelly slipped him a note encouraging him to write a book. Jones made good on the request Nov. 10, returning to the school to present a copy of his first book to his former teacher.
View Full Caption
DNAinfo/Howard A. Ludwig

Jones, now 20 and living in Griffith, Ind., said his family moved a lot — a transient life he attributed to growing up in poverty.

Classes had not begun when teacher Polly Kelly noticed Jones in the office at 10354 S. Charles St. in Beverly. She had taken a liking to Jones as a student teacher the year before.

"He just blew me away with his writing and his excitement for writing," Kelly said.

Stunned by the news that Jones was transferring from Barnard, Kelly scrambled for a piece of paper. On it, she wrote that she was sad to see Jones go, that she would always remember him, urging him to keep writing and "I hope to go to Borders and see your book on the shelves someday."

Twelve years later, Jones returned to the school a published author. He completed his first book, "Order in the Court: The Seven Laws of Courtship" in July. The Christian book costs $12 on Amazon.com and offers guidance for young couples before marriage. 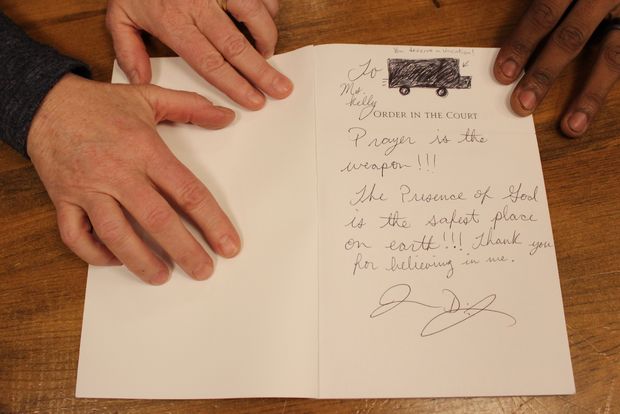 Jarvis Jones signed a copy of his book "Order in the Court: The Seven Laws of Courtship" for his former teacher at Barnard Elementary School in Beverly. The last line of the inscription reads, "Thank you for believing in me." [DNAinfo/Howard A. Ludwig]

Jones presented his book to Kelly at a school assembly Nov. 10. Jones was a surprise guest and was met by a tearful Kelly, who said the story of her former student inspired everyone in the auditorium.

"Ms. Kelly's love for my writing empowered me, but her letter brought us back together," Jones said.

In fact, Jones said his mother kept Kelly's note among a collection of his childhood keepsakes. He admitted to rereading the send-off on occasion and dreaming of the day he could fulfill his teacher's request.

"This is one teacher that I felt cared about me," Jones said. "It impacted me in a very profound way."

Kelly, a Beverly resident, was hired full time at Barnard after her student-teaching stint. She has taught first grade there for the last 11 years. But Kelly never forgot about Jones, recalling a brief meeting when he returned for a visit as a high school sophomore.

"I hadn't heard another thing about him until the assembly," she said.

Jarvis said he always liked to write and also liked to impress his teachers. So he would often write a four-page essay for an assignment that only required a single page. He also would make his own books, folding the paper and using tape to make custom covers.

Even then, his books had a Christian message. And Jones recalled writing about adults overcoming drug addiction and other topics with a religious thrust.

"My whole life, my mindset has always been about the living word of God," he said.

"I actually prayed for Lilliana. I went into my prayer closet and I said, "God, I want a daughter," he said.

Jones' second book, "Children of Holiness: The Seven Laws of Abstinence" is already written and has been sent to a publisher. He is penning a third book, "Wrestle for Greatness: The 13 Injunctions of Success," which focuses more on business than religion.

Jones sells many of his books at seminars he gives at churches and elsewhere. He is an assistant pastor of Covenant Keepers Apostolic International Church, which is led my his mother, Pastor Lendoria Ellis.

He said writing is never easy, despite his love of the craft. But having Kelly's note provided motivation, he said, as did the idea that someday he'd return to Barnard to deliver a copy to the teacher who planted the seed more than a decade ago.

"There is no greater feeling than doing what you said you were going to do," he said. "It was a moment that I had been waiting for for a long time."