CHICAGO — The FBI is on the hunt for a double murder suspect out of Milwaukee now considered one of its 10 Most Wanted fugitives — a man with strong ties to Chicago.

Terry Strickland is accused in the July 17 double murder of Maurice Brown Jr. and Michael Allen Reed outside a home in Milwaukee, according to the Milwaukee Journal-Sentinel.

The 24-year-old fled the scene and is still on the lam, the FBI said. They are offering a $100,000 reward for information leading directly to his arrest.

He has friends and relatives in Chicago.

Strickland is 6-foot-2 and weighs 240 pounds. He should be considered armed and extremely dangerous, the FBI said.

An arrest warrant was issued for him on July 28. In October, he was also charged with unlawful flight to avoid prosecution, a charge that gets the feds involved in the manhunt.

The FBI put him on their Most Wanted list in December.

Anyone with information is asked to call the FBI at (800) CALL-FBI. 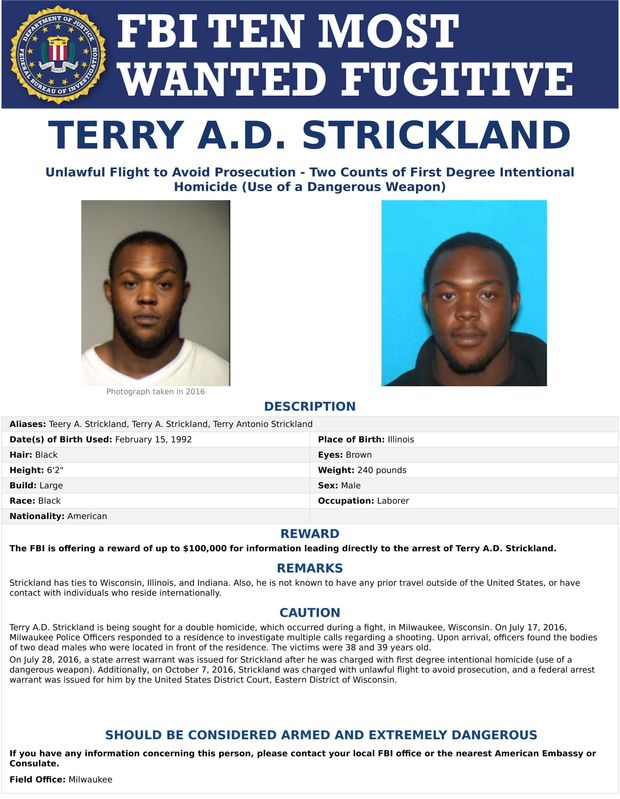