Chicago Knitters Unite For Pussyhat Project, To Cap Off With D.C. March

NORTH CENTER — Knitting is like the comfort food of hobbies: but a pair of California women have turned this typically feminine, domestic pastime into a symbol of protest.

The Pussyhat Project, conceived by Krista Suh and Jayna Zweiman, is mustering an army of knitters in advance of the planned Women's March on Washington set for Jan. 21, the day after Donald Trump's inauguration.

"The hope is to make a BIG unified statement at the march with the million marchers gathered together creating a sea of pink," Suh wrote in a description of the project.

"When a woman knits a hat, she will be keeping a marcher warm in D.C., and when a marcher wears this handmade hat, the marcher will be representing the person at home who made it. It's a beautiful connection," she said.

North Center's Knit 1, 3856 N. Lincoln Ave., is on board as an official "ally" of the project, which launched shortly after Thanksgiving.

Shop owner Lynn Coe said she appreciated the subversiveness of taking knitting, long considered the province of sweet little old ladies, and using it as a "tool of the resistance."

"There have been examples — Madame Defarge," she said, referencing the vengeful knitter of Dickens' "Tale of Two Cities." 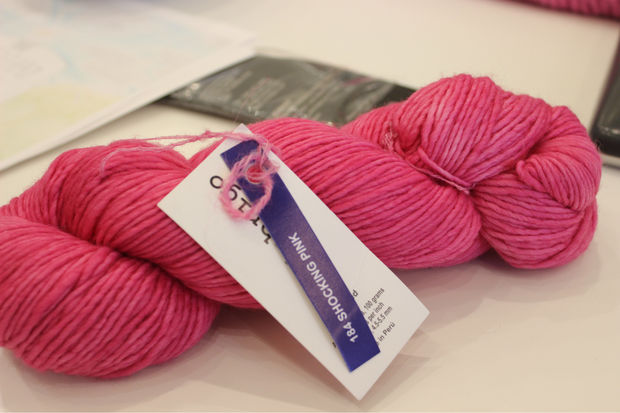 Organizers said they chose the color pink because: "Pink is considered a very female color representing caring, compassion, and love — all qualities that have been derided as weak but are actually STRONG. Wearing pink together is a powerful statement that we are unapologetically feminine and we unapologetically stand for women’s rights." [DNAinfo/Patty Wetli]

Knit 1 is serving as both a drop-off and pick-up point for hats, as well as stocking Pussyhat's recommended yarn and cap pattern.

"They just cold-called me because we have a yarn store," said Coe. "These women are super organized."

Coe said she's nearly sold out of her initial supply of yarn — two skeins will make three hats — and has already placed an order for more.

Anticipating that weather in D.C. might be chillier than the project's California-based organizers expect, Coe is also providing a pattern that makes use of heavier gauge yarn and produces a Pussyhat large enough to cover a smaller cap underneath.

Ellyn Bank, who often hangs out at the shop while her mother knits, picked up one of Coe's Pussyhat kits and declared, "My mother's been nudging me to have a knitting project — this is going to be my first project."

Knit 1 employee Abby Dillion said it took her a few hours to knit her own Pussyhat, which she intends to wear to a local version of the march.

"I love it," said Dillion. "I love the solidarity that everybody is sharing."

"I think people need the community," she said, and building community is, indeed not only one of the project's goals but an inherent part of knitting's appeal.

The day after Trump's election in November, it was the place women came to cry and hug, Coe said.

"Knitting circles are sometimes scoffed at as frivolous 'gossiping circles,' when really, these circles are powerful gatherings of women, a safe space to talk, a place where women support women," the Pussyhat Project declares.

I dropped in on a #pussyhat knitting circle organized by @thread.winners in Riverside, CA! Liz and Alyssa are amazing artists - it was a joy to meet them, and I am so grateful they've joined the @p_ssyhatproject movement!!! It was so smart to host a knitting circle in this adorable coffee shop!