Watch This Video, And You'll Never Try To Recycle A Plastic Bag Again

LINCOLN SQUARE — It's been nearly a year since the City of Chicago asked — actually, told — residents to stop collecting recyclables in plastic bags and dumping those bags into blue carts.

The "bagless" edict has been a difficult one for residents to swallow, resulting in a spike in "contamination" — the industry term for trash mixed with recyclables — and a decrease in overall participation in the city's recycling program.

If the ban on plastic bags is turning people off of recycling, why not nix the rule?

DNAinfo recently paid a visit to Waste Management's CID Recycling Center at 13707 S. Jeffrey Ave. The massive 180,000-square-foot facility processes 12,000 tons of materials a month, the majority of it from the City of Chicago.

We met with Lisa Disbrow, director of public affairs, and Hector Fonseca, plant manager, and cut straight to the chase: Why so much fuss over plastic bags?

For starters, "When a bag comes up through the line, we don't know if it's recycling or trash," Disbrow said.

There isn't time, or manpower, to open every bag, and given that needles are one of the biggest contaminants, "it's a safety hazard for our employees," she said.

But the real problem has to be seen to be believed:

To recap: Plastic bags need to be cleared from machinery before, during and after each of the center's two shifts, shutting down the operation for 20 to 45 minutes at a stretch. And by "cleared," we mean, in some cases, sawed away from sorting disks.

"It's a constant battle," said Fonseca, who's worked at the center since 2009.

To fully appreciate the havoc bags wreak not only on equipment but on the entire recycling system, it helps to understand the process.

They're separated at the recycling center and are then compressed into bales of like substances, which are shipped to domestic or foreign mills and manufacturers to be used as raw materials.

When it's clogged with plastic bags, the sorting machinery becomes less and less efficient at separating items.

Under optimal conditions, paper (mostly cardboard) should float atop the toothed drums pictured in the above video, and plastics and metals should fall through to be further divided, Fonseca said.

But when plastic bags (and Christmas tree lights, garden hoses, clothing and other no-no's) get wrapped around the equipment, too many plastic and metal containers swim along with the paper. This results in mixed bales — paper, plastic and metal all mashed together — which are of no use to manufacturers and need to be reprocessed, he said.

Reprocessing materials costs money, and so does shutting down the line to remove plastic bags. Ultimately those costs trickle down to Waste Management's customers, Disbrow said.

"If we can reduce our contamination," she said, "it's better for the entire circle of the economy." 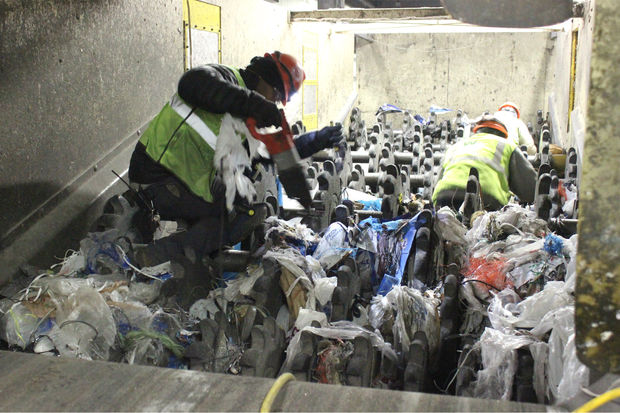 Plastic bags choke recycling sorting machinery. Equipment has to be shut down for cleaning at least six times a day. [DNAinfo/Patty Wetli] 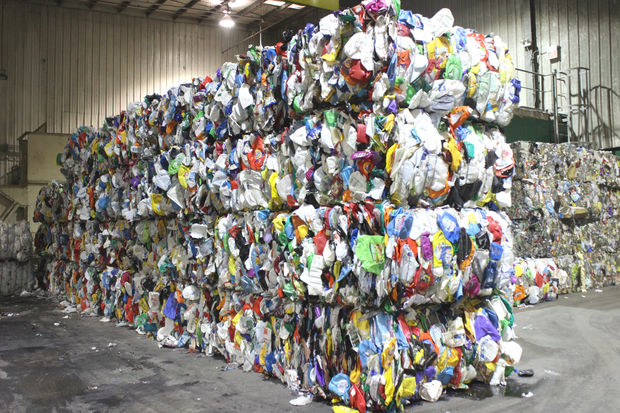 Paper, plastic and metals are separated at the recycling center and processed into bales of like materials. When plastic bags clog sorting equipment, the result is mixed bales, which have to be reprocessed. [DNAinfo/Patty Wetli]