From Sleeping In His Lyft Car To Lolla: Sir The Baptist, Hip-Hop Disciple

By Josh McGhee |&nbspDecember 15, 2016 8:50am | Updated on December 16, 2016 11:44am
@theVoiceofJosh
Twitter Facebook Email More
Sir the Baptist, whose real name is William James Stokes, is a Bronzeville native and rising hip-hop star.
View Full Caption
Courtesy of Sir the Baptist

CHICAGO — Before Sir the Baptist was rocking stages at Lollapalooza and Aahh Fest, the hip-hop musician walked away from his career in advertising, said goodbye to his home and took a job driving for Lyft.

By day, the black Dodge Caravan, which he financed with a little help from his mom, served as his office, he said. By night, it was his home.

"For the first maybe three months, I was sleeping in my car," Sir the Baptist, then known as William James Stokes, said of the time after he walked away from a career at global ad giant Leo Burnett.

"It seemed like a leap, but I would have to drive and sleep out of my car until I made enough money to have an apartment or whatever."

Between Lyft rides Stokes would "travel and meet different labels" hoping to sign with one as a musician.

"I had to drive. I needed the money," the rising hip-hop star said in a back room at the Virgin Hotel, 203 N. Wabash Ave., Tuesday, a year and a half after he walked away from the rat race. He says he doesn't take his sudden fame for granted.

"It’s crazy. It definitely reminds me that good things still happen to good people. Be a good person. Do the best you can, and it’ll come."

Stokes was at the Loop hotel for the premiere of "June," an animated short film directed by the Academy Award winner John Kahrs, of Disney's "Paperman." The film is inspired by Lyft drivers and passengers and features original music from Sir the Baptist, according to a press release for the event.

Sir the Baptist, the child of two religious leaders, including his late father, the Rev. James Benton Stovall, says his bold leap of faith came from a simple realization that he had two choices regarding his musical aspirations: "Man up and try to do it, or chicken out."

"I just didn’t want to [give up]. I wanted to focus on what I wanted to be and what I thought music needed. And put my talent and time behind it," he said.

The evolution of a preacher's kid

Growing up in Bronzeville, a neighborhood known for its influence on jazz, gospel and blues, he spent most of his time at Bright Star Church of God in Christ, 738 E. 44th St.

His father founded and served as minister of the church for nearly four decades, before he died in 1998, when Sir was 11.

"I’m a preacher's kid. I was with my dad all the time. My dad’s church was between a bunch of projects. You had a few buildings right around the church," he said. "You would get a balance of hip-hop and gospel because your homies were playing Jay Z outside, but your dad wanted you to listen to Fred Hammond."

Sir's identity as a preacher's kid is central to his work, right up to the title of his debut album "PK: Preacher's Kid." Though he has since left the church, when describing the album — set to drop at "the top of the year," he says — his leans on a parable from the Bible. 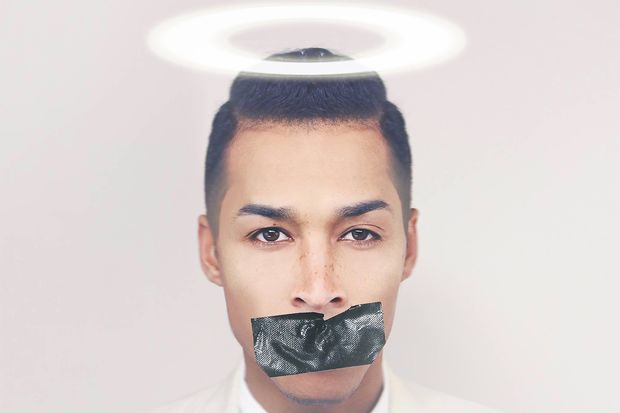 "I think its kind of like the prodigal son returning. It was moreso [about] giving you a glimpse of where I come from. This is the preacher's kid. What can we expect out of him?" he said.

Preachers' kids growing up like he did face a "terrible" internal conflict, he says, because they're forced to balance spirituality with "life in the streets."

"They have a piece of them that’s common sense and some [parts] that just make no sense. With the album, you’re going to get the balance of spirituality and streets," he said.

Save for two slim gold chains, Sir the Baptist's ensemble doesn't fit the stereotype of a young hip-hop star. 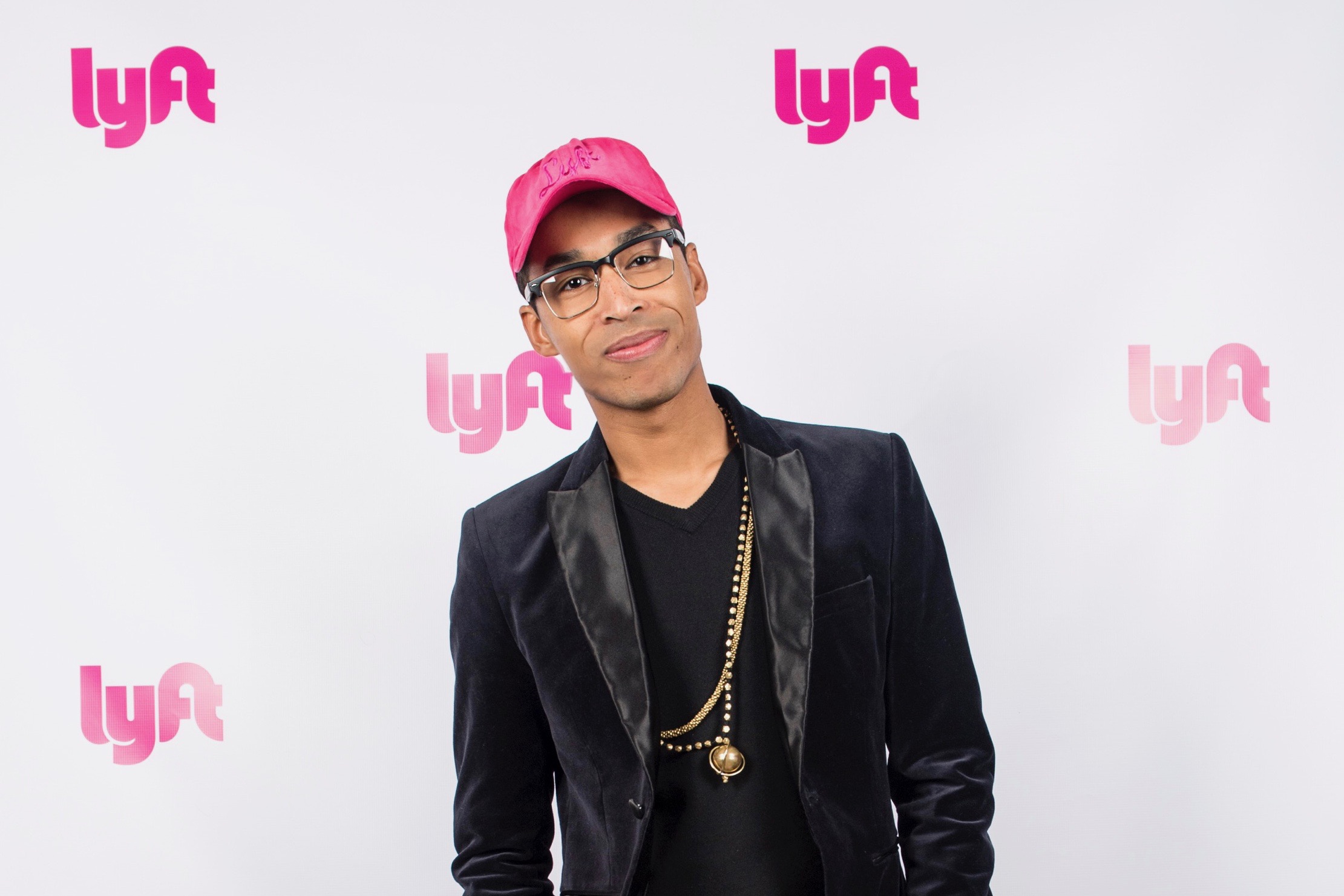 Sir the Baptist at the premiere of "June," an animated short film inspired by Lyft drivers and passengers.Courtesy of Lyft.

Under a pink hat emblazoned with the Lyft logo, he rocks a top-knot that he's constantly adjusting. He's wearing a suede blazer and gray slacks complemented by thick glasses. And, in a nod to the lyrics from his song "What We Got," instead of Jordans, he's donning his "church shoes" — brown oxfords.

"Sorry John, I sold those Jordan’s for lunch money/ I was wearing Stacy Adams looking hella Easter Sunday," he rhymes on the single from his forthcoming album.

From clips of church choir members ad-llibbing to the ever-present claps that underline the chorus, the song feels like a spiritual you'd hear in the pews of a South Side church. The message — which he prefers to call "subconscious hip-hop" instead of "conscious hip-hop" — draws comparisons to other young rappers from Chicago whose careers have transcended music and put them in the spotlight for activism.

"Maybe we’re urban monks, you know. Me, Chance [the Rapper], Saba. Maybe we have this sort of balance of suffering and harmony that we see something coming that maybe no one else sees. Maybe we don’t fully understand it," Sir said.

Their mission? In Sir's eyes, it's "trying to perfect life. That’s all. [What] we’re doing is trying to wake up and perfect life," he said.

Chance the Rapper, a South Side native whose rap career has exploded with Kanye West's blessing, has worked to curb violence in Chicago. Last year he criticized director Spike Lee's portrayal of the city in the move "Chi-Raq."

Chance now leads a cadre of young Chicagoans combining activism and hip-hop, including Saba, Vic Mensa, Jamila Woods and Sir, all of whom have made a career of making headlines with the deeply political messages in their music. 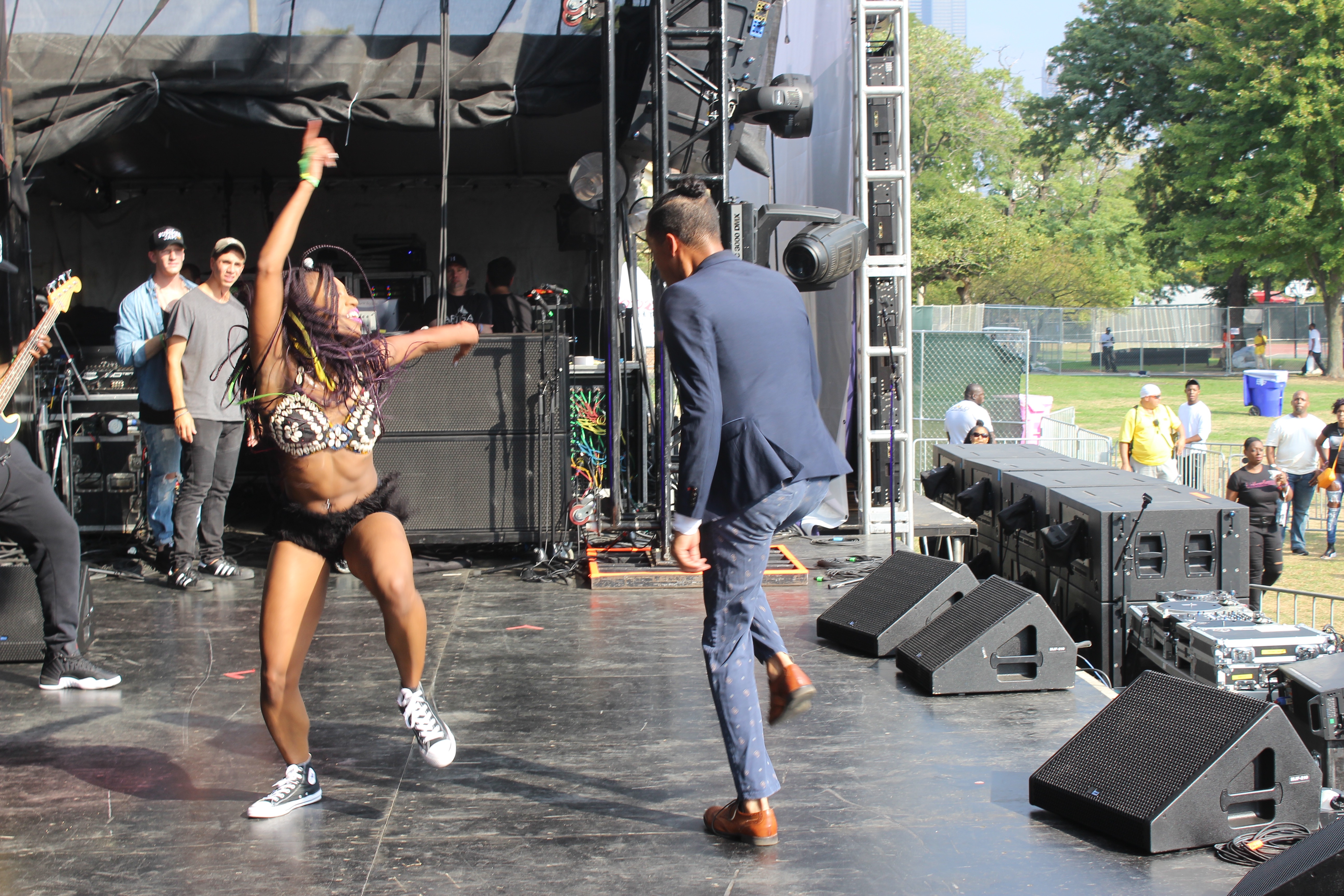 Sir the Baptist at the 2016 Aahh Fest in Union Park on the Near West Side. [DNAinfo/ Andrea V. Watson]

Sir landed himself in the spotlight in August while performing a skit featuring a Donald Trump impersonator at the Afropunk Festival in Brooklyn. The media interpretation of the skit, which he said was about "moving forward as a culture," was "interesting," he said.

"If Barack Obama wasn’t in tune with his blackness, then I don’t think he would’ve deserved the black vote," Sir said.

The backlash afer that skit has changed the way he plans to address issues he's passionate about in the future, he said.

"The way I did Donald Trump, they can take it out of context," Sir said. "But its hard to take a letter out of context. So I’m writing letters to people now."

Besides considering himself a hip-hop artist, Sir has a different name for what he is and what the work he does means.

"I think I’m here to be a chaplain, a hip-hop chaplain — someone that can give hip-hop some sort of reasoning with their spirituality. I’m not really focused as much on music as the mission, the call. That’s more important than anything. If I put a song out, it’s because I felt it was necessary."

So he calls his team "urban monks," and focuses their work at the center of a vVenn diagram of politics, activism and hip-hop.

One of the influences he cites is Young Guru. A recent encounter with the Grammy-nominated producer of Jay Z and Alicia Keys' "Empire State of Mind" left him with a mission — "keep working" — and a nickname: "Young God."

Before quitting his job in advertising, he was just "rapping like a regular rapper," but after working for Lyft, his worldview began to change. The conversations he had with customers helped his writing, and he began to understand the core values that all people share, he said.

Sir hopes his music will share his experiences, spread knowledge and draw people together in a sense of community, he said.

"I have visions of making communities within our culture. Communities that can flourish and build opportunities and economic structure for hip-hop culture and black people," he said.

His message to folks in Bronzeville, where he grew up, is to "focus on your dream. Try to do the same thing [I did.] Don’t work for the man for the rest of your life. Become the man, become the woman that you want to be, and do it while you’re young, but if you’re old don’t give up."

Sir has described himself as, not anti-God, but anti-religion, in the past.

Today, he says he is spiritual, but against the idea of organized religion, fearing that strict adherence "kinda destroys the human person."

Still, he sees his mission as bringing the community together through music and his own brand of spirituality.

"Hip-hop needs some sort of holistic healing. It needs someone that cares about people again," he said.

And who better to bring the community together than the preacher's son?

Meme About Chicago Police Gets Downstate Chief In Hot Water