CITY HALL — Ald. Willie Cochran (20th), a retired Chicago police officer who represents the neighborhoods he once patrolled, has been indicted for allegedly shaking down a local business owner and stealing $30,000 he collected to help people in his ward, court records show.

A federal grand jury indicted the alderman on charges of wire fraud, bribery and extortion. Prosecutors say he took $25,000 to support a gambling habit and $5,000 to pay his daughter's college tuition from a 20th Ward fund he set up to help kids and other local residents.

Cochran said in a statement he would continue to serve as 20th Ward alderman despite the indictment.

The aldermen, who was sitting in his City Council chambers chair surrounded by his fellow aldermen when the news broke Wednesday morning, also shook down a lawyer for $1,500 and a local liquor store owner for $3,000 in exchange for helping them in the ward, prosecutors said.

As the hammer came down in the form of a 15-count indictment, Cochran's colleagues, in the ceremonial part of their council meeting, spent more than an hour praising the Chicago Cubs for winning the World Series as he looked on.

When his colleagues rose to give the Cubs a standing ovation, Cochran left the chamber pursued by reporters. He declined to answer questions.

"I have not seen any details," Cochran said, as he went into his City Hall office. "It is not possible for me to make a comment." 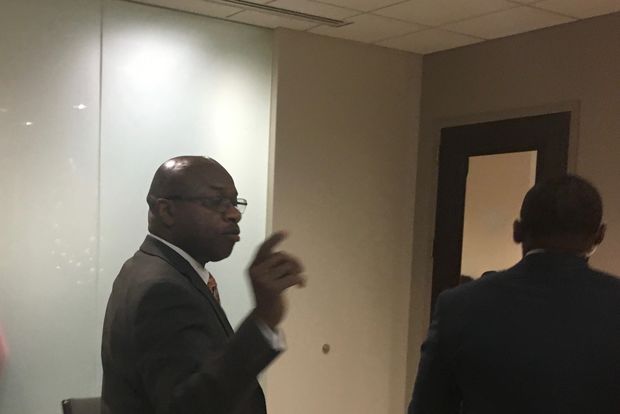 At a press conference after the Council meeting, Mayor Rahm Emanuel declined to respond to the details of the indictment, saying he had not seen the documents, but said he was thinking of the Cochran family.

The FBI began investigating Cochran based on information developed by former Legislative Inspector Faisal Khan, according to a statement from U.S. Attorney Zachary Fardon.

“When an elected official uses public power for personal gain, the average citizen pays and our democratic system suffers,” Fardon said. “We will continue to vigorously investigate and prosecute any elected official who attempts to use their office to enrich themselves.”

In a statement, Khan said the charges were evidence of "the blatant and systematic disregard for ethics and campaign finance law that so many elected officials have displayed."

Khan's office was disbanded in November 2015 and its duties transferred to Inspector General Joseph Ferguson.

• Cochran took a check for $1,500 — with the space for the payee left blank — from an attorney pushing the redevelopment of vacant and foreclosed homes using federal funds.

• Cochran told donors to the 20th Ward Advisory Fund that the money would be used to hold a back-to-school picnic, holiday parties, a Valentine's Day dance for seniors and to buy children winter coats, gloves and hats but instead used that money himself, according to the indictment.

Cochran, who was the only person authorized to withdraw money from the fund, used $5,000 in 2011 to pay his daughter's college tuition and withdrew $25,000 from the fund using ATMs near casinos where the alderman gambled.

• In addition, the indictment alleges Cochran took $3,000 in cash from someone who needed his support to lift a moratorium on packaged liquor sales on the west side of Cottage Grove Avenue between Marquette Road and 68th Street. The council passed the measure approving the store in April 2015.

However, last month, Cochran introduced a measure to reverse that action, and again prevent liquor sales on that block. The revised measure was approved by the council.

Cochran, 64, is the third alderman of the 20th Ward — which includes Woodlawn, Back of the Yards, New City, Englewood, Greater Grand Crossing and Washington Park — to be accused of criminal wrongdoing.

Cochran's arraignment has not yet been set, federal officials said.

After reports of the grand jury's investigation surfaced in October, Cochran said "bookkeeping errors" had been made in his campaign finance reports to state officials.

Cochran faces no charges related to his handling of his campaign finance funds.

He defended paying himself a salary from his 2015 campaign fund. To win a third term on the City Council, Cochran defeated challenger Kevin Bailey in a runoff, 56 percent to 44 percent of the vote.

Since Nov. 1, Cochran has amended his campaign finance reports 10 times, according to the Illinois State Board of Elections.

A police officer and marshal for 26 years, Cochran worked as a community organizer and ran a business before being elected in 2008 to replace Ald. Arenda Troutman, who pled guilty to charges that she demanded political contributions from developers looking to do business in her ward. Those charges were highlighted by Troutman's now infamous quote caught on tape: "Most aldermen, most politicians are hos."

Troutman was sentenced to four years in prison.

In fact, Cochran is the third sitting 20th Ward alderman to be indicted for criminal wrongdoing while in office.

Former Ald. Cliff Kelley was indicted in 1986 on charges bribery and income tax evasion. Before he was convicted, Kelley lost the 1987 election to Ernest Jones, who died in office in 1990. Troutman was appointed to Jones’ seat after he died.

Cochran has typically supported initiatives proposed by Emanuel during his tenure on the City Council.

Cochran joins a long list of Chicago aldermen accused of criminal wrongdoing during their time in office.

Between 1973 and 2012, 31 aldermen were convicted of corruption. Approximately 100 aldermen served in that period, which is a conviction rate of about one-third.

Cochran is the first alderman to make Chicago's infamous Hall of Shame for corruption charges since Issaac Carothers, the former head of the City Council's police and fire committee. He pleaded guilty in 2010 to illegally taking thousands in cash from developers.

Read the allegations against Cochran here: