DOWNTOWN — The Department of Streets and Sanitation is turning to the buddy system in its latest effort to boost participation in the city's recycling program.

As part of a pilot program, a "blue cart buddy" bag will show up at 5,000 households on the West and Northwest sides over the next few weeks, accompanied by an explanatory letter and postcard.

The reusable soft-sided plastic bag is designed to tackle what Streets & San has identified as one of the biggest obstacles to recycling — getting items from the kitchen to the cart, according to Chris Sauve, the department's director of recycling. Of the nearly million tons of trash created by Chicagoans per year, only 10 percent of it gets recycled and kept out of landfills. And those numbers have been getting worse. 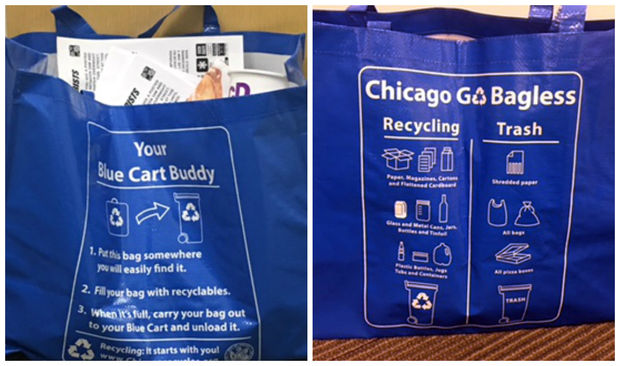 [Department of Streets and Sanitation]

"The bagless change was huge, it really skewed the numbers," Sauve said.

People who previously had been recycling the appropriate items — but in plastic bags — were now being tagged with orange "contamination" stickers, and frustration ran high, he said.

The conundrum facing Streets & San: "How can you course-correct behavior?" Sauve said.

The buddy bag comes printed on one side with some basic recycling do's and don't's, including no-nos like pizza boxes and shredded paper, which are among the most common contaminants.

On the other side, the bag is printed with step-by-step instructions of how to use it: keep it somewhere handy; fill it with recyclables; when full, empty the items into the blue cart. Repeat.

"It's a means of getting to people and asking them to participate correctly," Sauve said.

To determine the buddy bag's effectiveness, Streets & San will track the number of carts being tagged with orange contamination stickers — these carts are later picked up as trash, not recycling.

A second pilot program is aimed at residents of the city's Southeast Side, where the recycling rate is notably low.

"The thing we heard from Waste Management is that carts are sitting there not being used at all," Sauve said. "So what are we doing wrong?"

In the coming weeks, Streets & San will blitz residents with educational materials, including knocking on doors, to get more people using their carts.

The department is in the midst of running collection routes to establish a baseline of participation and contaminated carts.

"We'll look at the volume we're collecting ... we hope to double the poundage," Sauve said.

In addition to the two pilots already in the works, Streets & San is assessing feedback gathered from a recent series of community meetings, and will follow up with further targeted outreach, he said.

New Emphasis on Recycling 'Right' Has Some Folks Feeling Wronged

How's Your Neighborhood At Recycling? Some Are Less Bad Than Others (MAP)

If You Try To Recycle These 10 Things In Chicago, Your Bin Will Be Garbage

Stop Putting Recycling in Plastic Bags - Or Expect it To Get Dumped: City