Hey, That Bartender At The Victor? She's On 'Top Chef'

NORTH CENTER — Like a lot of Chicago bartenders, Amanda Baumgarten mixes cocktails, at The Victor Bar in North Center, between other gigs.

Unlike a lot of mixologists, Baumgarten's "other gig" is her upcoming appearance on season 14 of "Top Chef," which premieres at 9 p.m. Thursday.

Actually, this is Baumgarten's second go-round as a contestant on Bravo's popular culinary competition. Fans of the show may recognize her from season seven, when she finished sixth.

At the time, Baumgarten was already a veteran sous chef of no fewer than four Michelin-starred restaurants. With the "Top Chef" exposure, she appeared poised to reach a new level of professional success, but instead was sidelined with excruciating back pain, she told the Tribune.

A series of back surgeries forced her to take a break from cooking, and 1½ years ago, the Los Angeles native landed in Chicago, intent on mastering the art of the cocktail. She's been working behind the bar at The Victor, 4110 N. Damen Ave., since March.

To sharpen her kitchen skills before her return to "Top Chef," Baumgarten took a gig as a sous chef at Lincoln Square's Gather, Baumgarten told the Tribune. She will be one of eight repeat contestants facing off against eight newcomers.

Baumgarten won't be the only familiar Chicago face appearing on "Top Chef." Graham Elliot is on board as a judge this season. 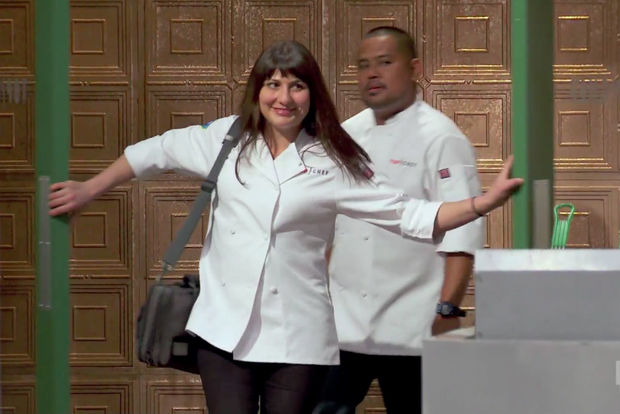 Amanda Baumgarten makes quite the entrance on season 14 of "Top Chef." [Bravo]

Related: What's In a Name? The Meaning Behind Victor Bar's Is Kind of NSFW