Democratic nominee Hillary Clinton was widely expected to win the state's electoral votes, and lived up to expectations by winning 55 percent of the vote statewide.

And the former Secretary of State and U.S. senator trounced Trump even more handily in the city, winning 83.6 percent of the overall vote in Chicago compared to Trump's 12 percent. Indeed, Chicago's post-election map is a sea of blue.

But bits of red sprung up in certain corners of Chicago, and nowhere was it brighter than in Mount Greenwood. The Far Southwest Side neighborhood supported Trump with 59.4 percent of the vote — a higher percentage than any other neighborhood in the city.

Other neighborhoods that showed support for Trump included Hegewisch and Garfield Ridge as well as the longtime GOP strongholds of Edison Park, Jefferson Park and Norwood Park.

"The Northwest Side and Southwest Side have been traditionally more conservative, more Republican," said Dick Simpson, a former alderman and current political science professor at the University of Illinois at Chicago.

Simpson said these areas are home to many white voters who have fled other parts of the city. Trump's message likely resonated with such voters in Mount Greenwood, many of whom might have felt a businessman was better suited for the job than a life-long woman politician, or chose Trump for other reasons, Simpson said.

"There are a number of people who did not like Hillary — believed she was crooked or didn't like her email" scandal, he said Wednesday.

Chris Cleveland, chairman of the Chicago Republican Party, also pointed to the demographics of the area as reasons for Trump's strong showing in Mount Greenwood. The neighborhood is 87.3 percent white, and Trump performed well with whites overall, Cleveland said.

Plus, "it's a conservative area, and it responded similar to other such areas" in supporting Trump, Cleveland said.

The same trend played out elsewhere throughout Illinois, where counties outside of metro areas and with greater white populations voted overwhelmingly for Trump — despite Clinton winning the popular vote with 2.9 million votes to Trump's 2.1 million in Illinois.

Steven Graves said voters in Mount Greenwood were drawn to Trump for the same reasons as others throughout the country — namely concerns over job growth, the supreme court vacancy, taxes, the military and the U.S. border.

"I think people are just fed up and voted based on the issues," Graves said Tuesday.

A Mount Greenwood resident, Graves was elected 19th Ward Republican committeeman in the March 15 primary. He is currently involved in a court battle with the Cook County and Chicago Republican parties as they have refused to recognize him for post, and Cleveland calls him a Democratic plant.

Voters in the 19th Ward — which includes Beverly, Mount Greenwood and portions of Morgan Park — have been increasingly supporting Republican presidential candidates since 2008.

That year, Barack Obama Obama received 85 percent of the vote citywide, according to Chicago's Board of Election Commissioners — but only 65.5 percent of ballots cast in the 19th Ward.

The area's GOP leanings were also evident in the March primary election. Then, area voters pulled nearly twice as many Republican ballots as they did in 2012, according to the board of elections.

Of course, there were still far more Democrat ballots pulled in the 19th Ward primary. But among those who voted Republican, Donald Trump was the favorite.

"I think [Trump] played well to everyone. Even to those in the African-American community, he said, 'What do you got to lose?'" Graves said. "I say give him a chance." 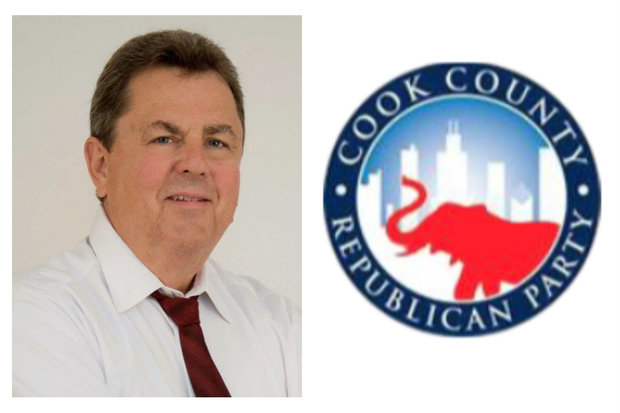 Steven Graves, of Mount Greenwood, was elected 19th Ward Republican committeeman in the March 15 primary. He is currently involved in a court battle with the Cook County and Chicago Republican parties. [DNAinfo/Supplied Photo]

The election came just three days after the fatal police shooting of a 25-year-old black man in Mount Greenwood. The days that followed were highlighted by protests over the shooting — and counter protests, including a raucous rally on election night.

But both Graves and Cleveland denied the shooting and protests had any role in how neighborhood residents voted.

"By the time three days before the election rolls around, people have decided," Cleveland said Monday. "I just hate to blame the results on that one incident."

Simpson also agreed. He said the shooting and the demonstrations might have helped to drive voter turnout, but such events are unlikely to sway the hearts and minds of voters in a community home to many police officers, firefighters and other first responders.

"That whole interaction probably upset people on both sides of the issue," Simpson said.

In wake of the election and the subsequent protests, some have pointed to Trump's victory in Mount Greenwood and throughout the country as a "referendum on hate," saying Trump exploited racism, bigotry, hatred and fear to win the election.

Cleveland disputed that, saying the election was filled with "false accusations of racism." And he believes those speaking honestly about a variety of topics — including police reform — have been unfairly labeled.

"People are tired of being accused of being racist," said Cleveland, who echoed a common refrain among protestors in Mount Greenwood.

Aside from the presidential election, Graves said his next court date is Jan. 11. He has no plans to back away from his claim to the 19th Ward GOP committeeman's job.

"Trump won fair and square, and I can relate from my own experience," Graves said.