Anti-Trump Protesters March In Chicago: 'We Reject The President-elect'

DOWNTOWN — Chicagoans said they rejected President-elect Donald Trump and spoke out for minorities during the fourth day in a row of anti-Trump protests in the city.

A crowd gathered in Millennium Park on Saturday, chanting and waving signs and flags, before taking to the streets and marching Downtown.

They chanted about women's rights, immigrants, LGBTQ people, Muslims and people of color, groups that many of the protesters fear will not be safe during a Trump presidency.

Among the protesters was Jim Williams, 37, of Andersonville, who fears he will be unsafe as a gay man. Waving a rainbow flag, he said he attended the protest to show solidarity with all minority groups, all of whom are "at risk," he said, particularly because some people could see a Trump presidency as giving them a "license to act out."

"I don't stand for what [Trump] stands for, and I feel like he is the worst choice for America right now," Williams said. "He's highly divisive. His rhetoric is poisonous to the culture and to our community, and it threatens diversity." 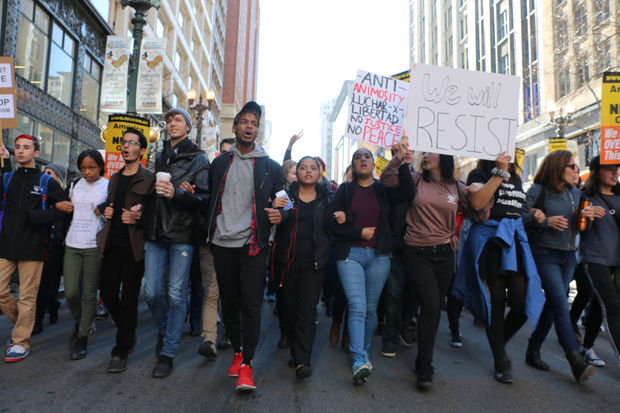 Protester Uzoagu Okonkwo, 29, of the West Loop, said this election has been a "slap in the face:" She voted for Barack Obama, the United States' first black president, in 2008, but since then the country has become more fractured, polarized and racist, she said.

A medical student, Okonkwo said she has seen many people helped by the Affordable Care Act, and she is worried about how a Republican-controlled government will affect the act. Republicans have said for years they want to repeal the ACA.

Okonkwo, a black woman and the daughter of immigrants, said she also fears Trump and his cabinet could implement policies that hurt minorities.

"I feel hopeful that everyone's protesting, but I do feel hopeless now that Trump is president, we do have a Republican Legislature, and probably the Supreme Court is going to go completely right, too," Okonkwo said. "I'm afraid that it's all going to go downhill because of this presidency and the way that the country has gone."

"We reject the president-elect!" anti-Trump activists chant in Chicago.https://t.co/wGPbnc7nM3 pic.twitter.com/GwiaxlqNL5

Richard Domenico Ehlert, 19, of Old Town helped at an anti-Trump protest on Friday night and returned Saturday to lead chants and guide the crowd. He was frustrated Democratic presidential candidate Hillary Clinton won the popular vote — meaning she received the most votes of any candidate — but still lost to Trump. 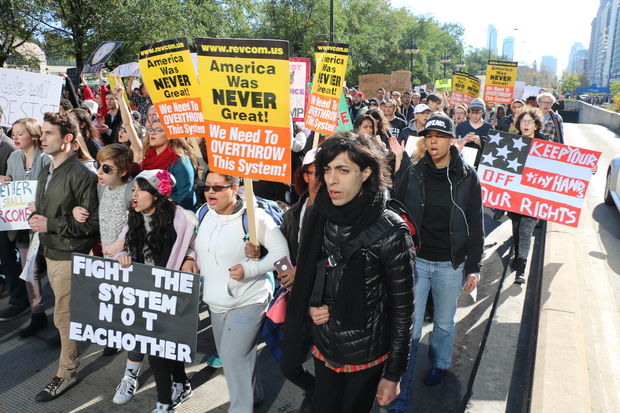 Anti-Trump protesters said they will keep speaking out and will donate money and work with organizations that help minorities. [DNAinfo/Kelly Bauer]

The crowd, which swelled to more than 1,000 people before meeting with another protest group in the afternoon, was larger than Ehlert thought it would be. People on the sidewalks cheered and clapped for the protesters while people in cars honked their horns.

"I am so proud of this city for beating my expectations on how many people showed up to protest Donald Trump together," Ehlert said. "It's people from every single background coming together under a united cause. And right now in this country we need all the unity we can get, and I think this is a beautiful example of that."

This anti-Trump march is huge and extremely diverse. I still couldn't see the end of this crowd by end of video.https://t.co/wGPbnc7nM3 pic.twitter.com/XnrnP9EaFC

Nuria Sheehan, 40, of Edgewater, said she went to the protest so the rest of the world could see the United States doesn't support Trump, pointing to Clinton's win of the popular vote as evidence of that. She wants people who see the protests in Chicago to know they can become involved.

"They don't have to just start normalizing this hatred that Donald Trump represents. It's not normal," Sheehan said. "This isn't just a standard Republican, and ... it's really scary, and they can get involved."

The protesters also talked about how they can help people in the days to come: Williams is donating regularly to several organizations so they can "keep up a consistent fight" against the upcoming Trump administration, and Okonkwo hopes people will participate in local government and look ahead to the 2018 midterm elections.

Sheehan wants to keep participating in protests and "campaigns for change," she said. She works with Showing Up For Racial Justice and is looking into other organizations to help with.

There have been numerous protests in Chicago in the last week, some in regards to the shooting of Joshua Beal by an off-duty Chicago Police officer and others in response to the election results and President-elect Donald Trump.

Wednesday's anti-Trump protest yielded a few incidents of violence, including a tense moment as demonstrators clashed with police during a break-in attempt at Trump Tower.