CHICAGO — Hours after an off-duty Chicago Police officer shot and killed a man in Mount Greenwood, Blue Lives Matter protesters clashed with Black Lives Matter activists near the scene of the shooting.

Around 3 p.m. Saturday, police said a vehicle that had just left a funeral service was stopped in traffic in front of a Chicago Fire Department station in the 3100 block of West 111th Street. When an off-duty firefighter confronted the driver and told him he was blocking a fire lane, the driver got out of the car and a fight broke out, police said in a statement.

A police sergeant driving to work saw the fight and saw a man with a gun, police said in a statement.

"The Sergeant stopped, exited his vehicle, displayed his weapon and announced his office," the statement said. "As the incident continued to escalate and the offender failed to drop his weapon, shots were fired striking the individual multiple times."

The man, identified by the Tribune as Joshua Beal, 25, died at Christ Hospital. "Numerous individuals," including an off-duty firefighter and police officer, were injured but not seriously, police said.

Black Lives Matter activists headed to the area to check on Beal's family hours after he was killed, according to Facebook Live video posted by the group Saturday night. There, they encountered a group of people holding a "Blue Lives Matter" flag and yelling at them to get out of their neighborhood.

Activist Kofi Ademola was with the group, and said they didn't come to Mount Greenwood to protest. They just wanted to connect with Beal's family and waited inside a Burger King at 111th Street and Kedzie Avenue until they were asked to leave, Ademola said.

"There was no protest," Ademola said. "We were there to check on the family to make sure they were safe. Next thing we knew, we were surrounded by a bunch of angry white people. Nobody said anything to them."

In a video posted by Ademola's group, a man said that if you don't support police, you're a criminal. Another shouted at the group to get out of the neighborhood.

Police in the video did not engage with either group, but attempted to keep the situation peaceful. 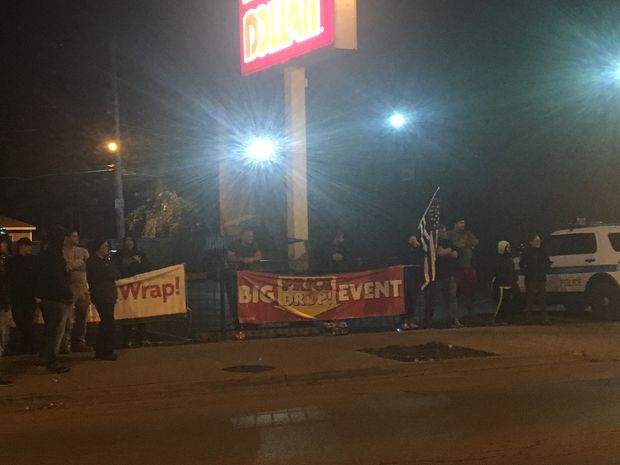 A group shouting "Blue Lives Matter" gathered near the scene of the police shooting Saturday night.

"The incident is of grave concern to us due to the way many have chosen to demonize the victim and have made a judgment of guilt without evidence," the group's board said in a statement. "We continue to believe that it is important for all people to feel safe in this community, including those who gather in protest," SCDC said.

The group said they "believe it is necessary to provide a space that allows for the discussion about how racism affects the way these incidents are viewed without derailing the conversation to focus on other groups or concerns."

Beal's family told Fox Chicago that the incident began when an off-duty police officer cut off members of the funeral procession in traffic, and that Beal had a license to carry a gun.

The Indianapolis man was only in Chicago to be a pallbearer at a cousin's funeral, Fox reported.

Family members said they would consult a lawyer, the Tribune reported.

“The police are going to pay for this,” Miranda Macklin, a family member, said to the Tribune. “Justice will be served.”

In a video of the incident posted on YouTube, at least 13 shots were fired. Police told the Tribune they were not sure if Beal fired his weapon.

The Independent Police Review Authority is investigating the incident, and the officers involved will be placed on administrative duties for 30 days, police said.

Who Are The Faces On Crown Fountain?