By Howard Ludwig |&nbspNovember 3, 2016 8:39am
@howardaludwig
Twitter Facebook Email More
McNally's responded to the Chicago Cubs winning the World Series with an almost predicable degree of snark Thursday morning. Northbound traffic is treated to the message, "All Good Things Come To An End."
View Full Caption
DNAinfo/Howard A. Ludwig

Southbound traffic on Western Avenue is greeted with the sign that reads, "It Was A Lot Of Fun For A Lot Of Years." Northbound traffic is treated to the message, "All Good Things Come To An End."

Morning commuters were seen pointing to the sign at 11136 S. Western Ave. in Morgan Park and offering a snide smile. 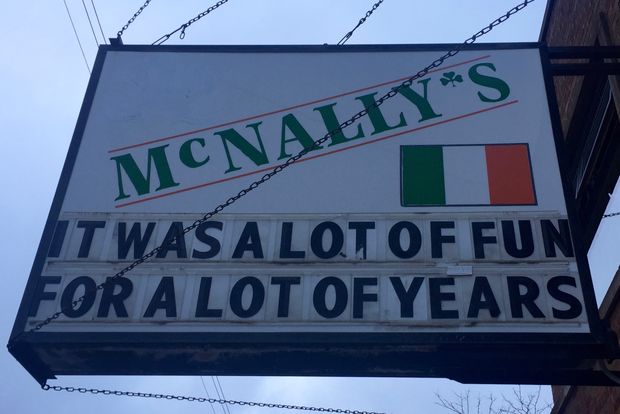 McNally's has a long history of poking fun at the Cubs for the team's history of losing. The tavern's marquee has also featured signs during the 2016 playoffs that read, "Fun Starts Now. Go Indians" and "2016 Cub Curse: Jobu" in reference to the 1989 movie "Major League."

For years, the building that's home to the tavern featured a large mural celebrating the 2005 White Sox, and behind the bar is an "L" flag, which had been flown over Wrigley Field after a Cubs loss.

The owners of the bar also announced that it is for sale during the Cubs recent playoff run, though the timing of the sale is purely coincidental, according to Rich Fitzgerald of Fitzgerald Real Estate.

That said, a GoFundMe fundraising campaign was launched Oct. 24 in an effort to effort to "buy the South Side troll bar McNally's so we can knock it to the ground."

The Heckler, a satirical sports site, was behind the effort. The site is operated by Brad Zibung, a River North Cub fan.