LINCOLN SQUARE — In the bottom of the 10th inning during Game 7 of the World Series, FOX cameras zoomed in on a mustachioed Chicago fan, wagging his index finger to signal the Cubs were one out away from their first World Series title in 108 years.

"Yes, that was Danny!!!" Margaret O'Conor exclaimed on Facebook when she recognized her husband.

Dan O'Conor, who grew up racing home from school in the '70s to catch the final innings of Cubs games on WGN-TV, had nabbed a last-minute ticket to Game 7 courtesy of a guy who knew a guy.

Talking with DNAinfo on his drive home from Cleveland Thursday, a Red Bull-fueled O'Conor said he had no idea at the time that he'd made such a prominent appearance on TV.

His cellphone's battery had died late in the game and it wasn't until he powered up the next morning that O'Conor was flooded with texts and messages.

"People are crawling out of the woodwork," he said.

His 15 seconds of fame capped off a surreal 24 hours, O'Conor said.

All the stars seemed to align in his favor, he said, right down to WXRT-FM playing The The's "This Is the Day," one of his favorite songs, at the start of his road trip Wednesday.

Once inside the stadium, he was surrounded by his fellow Cubs fans, who formed a "vocal majority," O'Conor said.

"It felt great to get the lead right out of he gate, but still it was the Cubs," he said. "You still are nervous and anxious because of everything the franchise has put fans through."

Following a brief rain delay, O'Conor traded his seat in the 16th row for one in the second row behind the Cubs dugout — "It was a little looser," he said of security — which is where the FOX cameras spied him.

Maybe his mustache caught their eye or maybe it was his hand-stenciled jacket, with a Cubs "C" logo that on closer examination actually stood for The Clash.

FOX couldn't have possibly known that O'Conor's unusual zip-up had a back story steeped in Cubs lore. 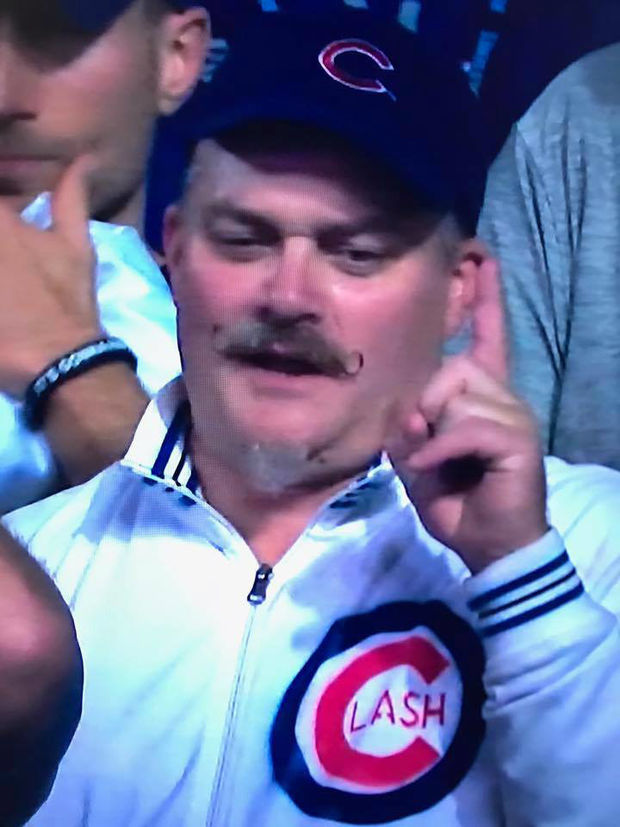 O'Conor, who runs DTox Designs, also has deep ties in the music industry, which led him to Pearl Jam's August concert at Wrigley Field.

The "C for Clash" image appeared on the Jumbotron during a performance of the Cubs anthem "All the Way" by Pearl Jam frontman and Cubs fan-in-chief Eddie Vedder.

O'Conor filed away the Clash idea and finally got around to stenciling the symbol onto a jacket in time for Game 7.

After the rain delay, with Vedder just a row away in the stands, sitting with actress Bonnie Hunt, Cusack and Blackhawks vet Chris Chelios, O'Conor seized the moment.

"I went over there and showed Eddie my shirt," O'Conor said. "He reached into his pocket and gave me a guitar pick" — a pick emblazoned with the number one, worn by Vedder's favorite Cubs player, Jose Cardenal.

As amazing as that moment was with Vedder, it didn't begin to compare with the Cubs' extra-innings victory.

"People were ecstatic, they had permanent smiles," O'Conor said.

After hanging around the stadium for a half hour or so after the game, hoping to gain field access, O'Conor and his pal headed to a bar.

"It was taken over by Cubs fans," he said of the watering hole. "The bar was all Cubs."

Having scored tickets to a previous Game 7, back in 2003, O'Conor said Wednesday's victory was beyond special.