LIVE BLOG: 'Cubs In Six, I'm Not Worried At All'

WRIGLEY FIELD — With an electric buzz brighter than the Wrigley Field stadium lights, Wrigleyville is brimming with anticipation for the remaining World Series games this weekend.

Chicago Cubs fans lined up before sunrise to bask in the glory of the team's first World Series run since 1945. With Cleveland up 2-1 in a close series, there's everything to hope for, and fans aren't afraid to show their joy.

We'll be keeping tabs on the neighborhood all weekend. Here are some highlights from Wrigleyville and Cubs nation worldwide.

Send your tips and photos to acheung@dnainfo.com or share on Neighborhood Square — and wish the Cubs the best of luck.

Some Cubs fans exiting Wrigley clashed with animal rights activists who had gathered to demonstrate outside the field:

This Cub fan disagrees with the animal rights protesters. pic.twitter.com/dTPNVVIahr

Cubs fans parading through Wrigleyville say they won't be deterred by this loss.

And with that, the Indians have taken a 2-1 lead in the Series, shutting out the Cubs with a final score of 1-0 in Game 3 at Wrigley.

"It's the bottom of the seventh inning, last chance to order a beer," Cubs superfan Bill Murray announces before singing "Take Me Out To The Ballgame" in his best Daffy Duck voice for the seventh inning stretch.

One edit: "Root, root root for the Cubbies!"

Bill Murray is singing "Take Me Out To The Ballgame" as Daffy Duck right now #worldseries https://t.co/m6uTR4168n pic.twitter.com/zBW3lfGonp 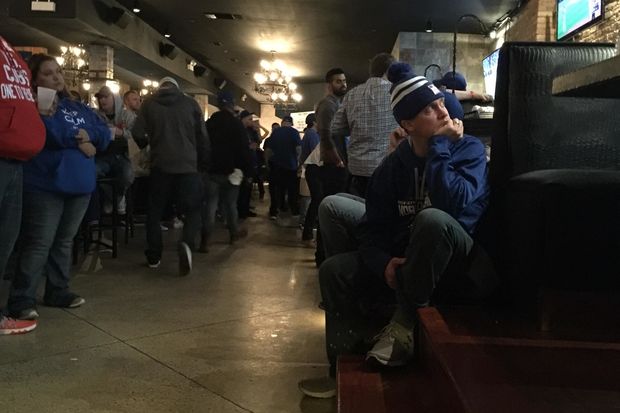 The somber tone at Moe's Cantina as fans wait for a run on either side in the sixth inning.

Brent and Danielle Winters drove to Chicago on Friday from Cleveland — Cleveland, Tennessee, that is.

Just outside of Chattanooga, Cleveland is a nine-hour drive, but worth the trip, Brent Winters said.

"At this point, it's a once-in-a-lifetime opportunity, so you might as well come up and experience it," he said.

Growing up in Florida near where the Cleveland Indians train in the spring, Winters said he watched Cubs games on WGN as a child. He's been a fan ever since.

The couple got to Wrigleyville around 5:30 p.m. Friday and walked around until they found a "reasonable" cover fee. They paid $40 to get into Moe's Cantina.

Danielle Winters has been swept up in the Cubs spirit flowing through Chicago.

"Everyone is all, 'Go Cubs,' and super warm and accepting," she said. "It's been awesome." 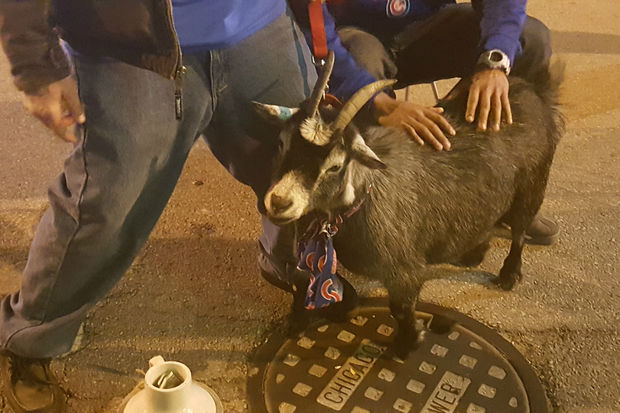 We knew this might happen: there's a goat outside Wrigley Field right now. 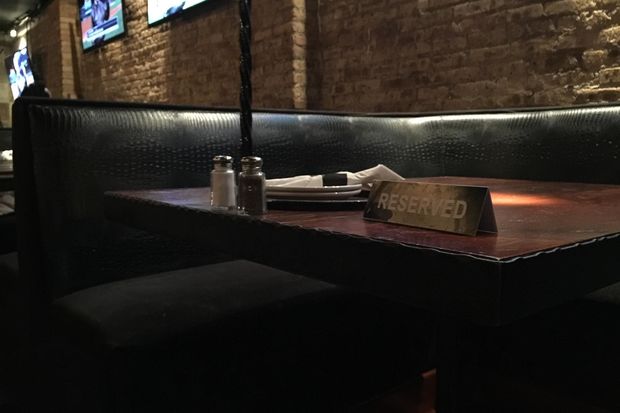 At Moe's Cantina, bouncers remarked at how subdued the crowds were as the game entered the fifth inning, though some mused that it could be the 0-0 score or the smattering of half-empty tables at the bar, one of many that charged hefty admission fees for the first World Series game at Wrigley. 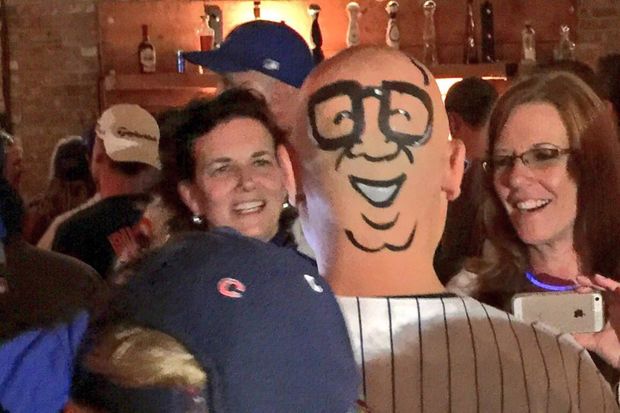 With Wrigleyville locked down for blocks around the Friendly Confines — and seats inside surrounding bars going for as much as $1,000 per table — fans are gathered in the streets watching and listening as the fourth inning continues without a run for either team. 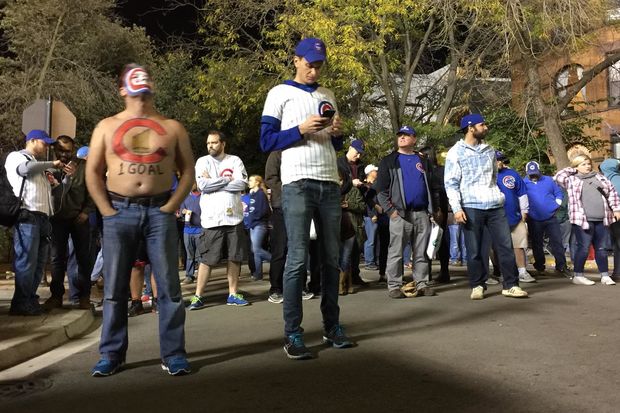 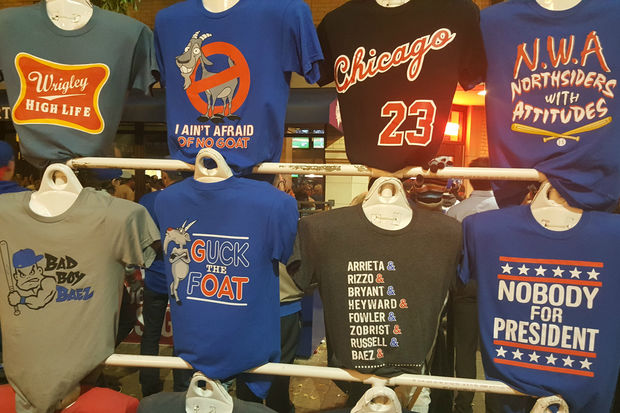 Onto the fourth inning, still scoreless.

Cubs strand a man on second base as Game 3 enters the third inning with no score yet.

In light of the news that Cubs superfan Bill Murray will be singing "Take Me Out To The Ballgame" for the seventh-inning stretch, fans are lobbying networks on social media to hold off on commercials and broadcast the performance:

Remember last year's "W" towel the team handed out to ticket holders? This year's is a major upgrade:

Edgewater is ready to pop some bottles, Cubbie style.

For what it's worth, officials are actually hoping that doesn't happen in Wrigleyville tonight. Police were asking way back at the start of the postseason that grocery and liquor stores near Wrigley Field refrain from selling champagne during playoff games.

If you're taking the sage advice to avoid driving into Wrigleyville this weekend, you might be hopping aboard one of these classic 1970s CTA trains:

Our historic 2400s are in @Cubs World Series Special service on the Red Line! Keep an eye out! #flytheW Info: https://t.co/Gsu64gm2nI pic.twitter.com/ZkmThqYKJi

Check out this amazing Cubs mural over at Heritage Bicycles, 2959 N. Lincoln Ave.:

Clark and Addison is lit.

Gates into Wrigley Field should be opening soon, per city plans announced Wednesday.

For those who want to be in Lakeview without the chaos of Wrigleyville, GoPride.com has a great list of Boystown bars where Cubbies can catch the game.

Police are starting to block off streets to traffic around Wrigley Field:

Addison (Halsted to Racine) and Clark (Irving Park to Roscoe) being closed to traffic soon near Wrigley Field, per #ChicagoScanner @arielfab

Cubs manager Joe Maddon said his 83-year-old mother Beanie is stuck in Philadelphia, thanks to the plane that caught fire at O'Hare Airport Friday afternoon.

All 161 passengers and nine crew survived after the American Airlines flight caught fire during takeoff.

During his pre-game press conference, Maddon also says he's ready for a vacation. Every Cubs employee lets out a huge collective sigh in agreement.

Maddon: "Thank God there's not another round after this. I'm ready for the family vacation."

People are apparently trying to bribe their way into bars:

Which almost makes sense, since lines are stretching across entire blocks (h/t @CBSGonzalez):

The line is already down the block on Sheffield to get into Murphy's Bleachers, one of the only bars without a cover charge. #WorldSeries pic.twitter.com/3HJD2fbfOB

In case you missed it, this is the caliber of awesome we're dealing with tonight. Bill Murray will be singing "Take Me Out To The Ballgame" for the seventh-inning stretch. We want to "Groundhog Day" that moment forever:

If you're heading to the sidewalk cafes still open around Wrigleyville, be prepared to stand. While the Town Hall District initially wanted all sidewalk cafes shut down for the World Series this weekend, businesses struck a compromise and agreed to remove all tables and chairs.

Of note: Sidewalk cafes are different from patios, which are on the bars' private property and are not affected, city officials said.

Want to feel good about all the money you spend tonight? One bar that isn't charging a cover is Gman Tavern, 3740 N. Clark St. Instead, they're accepting donations for Lakeview Pantry, which recently opened its first permanent home near the Sheridan "L" station.

However, they're already at capacity, so be prepared for a bit of a line:

Wonder why bar owners decided to charge those crazy covers to get in this weekend? The Athletic spoke with Jeff Dillman, one of the owners of Bernie's. Check it out. 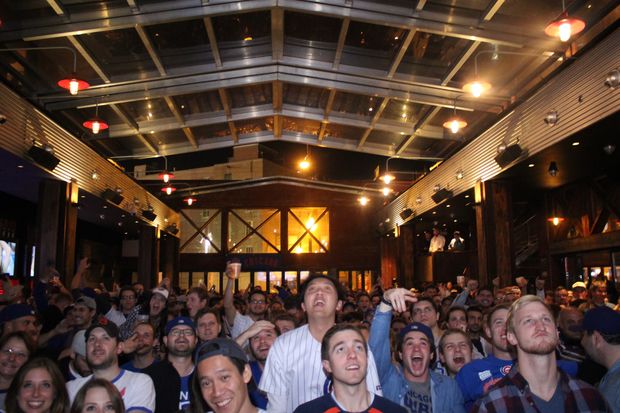 Old Crow Smokehouse is among Wrigleyville bars charging hundreds to get in during the World Series. [DNAinfo/Ariel Cheung]

It's a good read, especially as you ponder whether it's worth $1,000 for a table tonight. If you're looking for cover-free bars, BP Wriglevyille intern @FullCountTommy has thrown together a list of 28 bars and what they'll be charging to get in the door tonight:

List updated with 28 bars in case you're trying to figure out who is charging this weekend in Wrigleyville https://t.co/lRdKZubfky

Whatever you do, don't call the bars. They're literally begging: 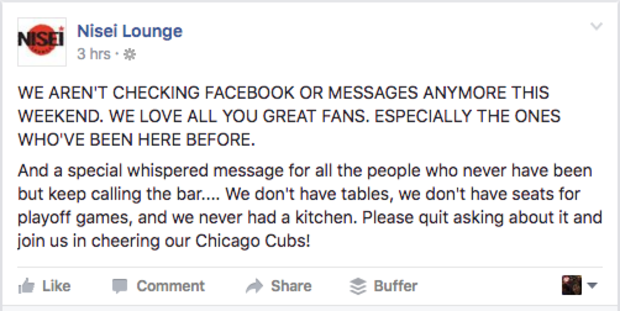 Would that we all had giant suburban lawns to adequately express our Cubs pride. Good on you, man with huge yard.

The Cubs just released the starting lineup for Game 3, and the forecast is expected Soler flares:

This guy drove down Sheffield Avenue then paused for about 10 minutes to show off his sick wheels as several fans raced over to grab selfies. While many appreciated his Cubs devotion, the cars behind him did not. 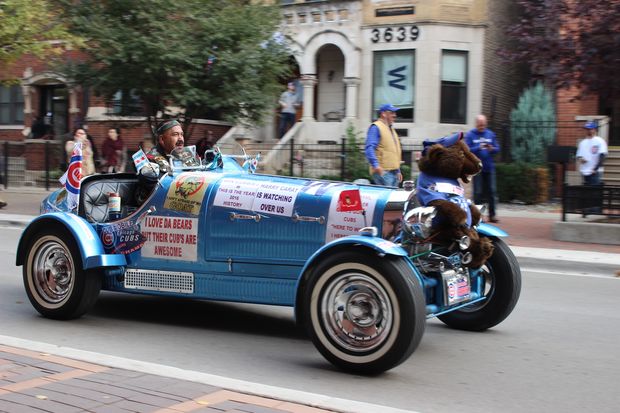 A mega Cubs fan drives his decked-out, old-school automobile down Sheffield Avenue ahead of Game 3 of the World Series. [DNAinfo/Ariel Cheung]

With a gleeful, "See ya, 71!" the well-known Eamus Catuli sign outside Wrigley Field got a long-awaited update Friday.

If you want to park in the neighborhood, it might be easier to drive your car around for the next 36 hours than to find an actual parking spot.

Someone left flowers for Ron Santo, and our hearts are exploding.

Earlier this week, DNAinfo senior editor Justin Breen spoke with his son, Jeff Santo, about the beloved Cubs third baseman and broadcaster, ahead of the weekend games.

While waiting for that Eamus Catuli sign to change, it's hard not to admire this very flattering imitation:

If you find inspiration in the Cubs' first World Series run in 71 years, you're not the only one. This artist was spotted at Murphy's Bleachers capturing the famous Wrigley Field marquee in all its cherry-red wonder: 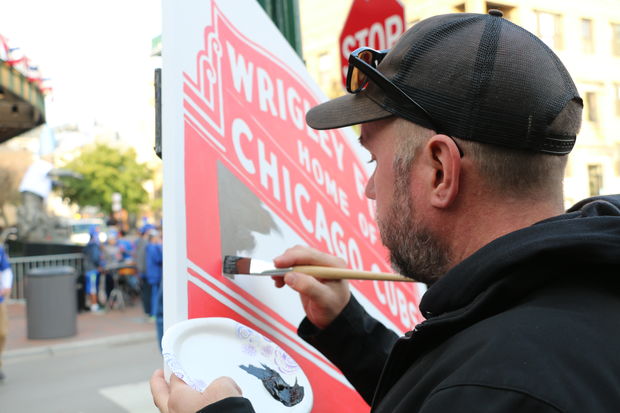 An artist paints the Wrigley Field marquee from Murphy's Bleachers on Friday ahead of Game 3 of the World Series. [DNAinfo/Kelly Bauer]

Still waiting for the well-known Eamus Catuli sign to reset its counter for the Cubs' National League title. Wrigley has only been waiting 71 years for this to change, guys, nbd.

It seemed staffers at the Lakeview Baseball Club, 3633 N. Sheffield Ave., were unsure of how to get the "71" pulled off the sign, so it's taking a bit longer than expected.

Some Cubs fans waited in line overnight, hoping for a chance at unclaimed tickets to Game 3 of the World Series. Some got in line at 11 p.m. Thursday.

Huuuuge line outside Wrigley for tickets. I spoke to some guys who have been here since 11 p.m. Others have been here even longer. pic.twitter.com/n5zKFyDizO

Alex and his friends have been camped out for tickets since 11 p.m. They took a few naps last night, killed time by joking around. pic.twitter.com/RIMnUpxHVC

Fans are already lining up outside Cubby Bear, which is charging a $100 cover but took no reservations:

People already lining up outside the Cubby Bear to make sure they're there for the Cubs game...which starts about 7 p.m. pic.twitter.com/l08LUDAim8

• When Will The EAMUS CATULI Sign Outside Wrigley Field Change?

• Cubs Fans All Over The World Celebrate Trip To World Series

• $113 For An Air Mattress? Wrigleyville Airbnb Is Red Hot For Cubs Playoffs

• Video Shows All 7 Games From 1945 World Series, The Last In Cubs History (Until Now)