Church Collapse In Wicker Park 'Sounded Like An Earthquake'

About half of the 16,000-square-foot building at 1903-05 W. Schiller St. crumbled for reasons not yet announced, though a spokeswoman for the Chicago Department of Buildings said work there had not been OK'd by the city.

One neighbor said the collapse, which damaged a number of parked cars in the area, "sounded like an earthquake."

Chicago Fire Department Chief Dan Cunningham said "we are still looking for the owner of the building," adding "there is somebody responsible for this."

Also damaged in the collapse was a two-story vacant apartment building next door that is part of the church, Cunningham said.

No one appeared to be injured, according to workers at the scene, though fire officials said Monday morning they were "not 100 percent certain no one got hurt."

Jameel James, a construction worker who showed up for work Monday at the church, said "it's a blessing that nobody got hurt." James was on a team of 15 doing interior demolition and preparing the church to be remodeled.

Jovim Ventura, who lives across the street, heard the collapse of the church, located on the southwest corner of Evergreen and Schiller Streets.

"It sounded like an earthquake, and then ambulances and helicopters came," he said. "We didn't know it was this close. My wife and I went outside and saw it had collapsed," Ventura said. 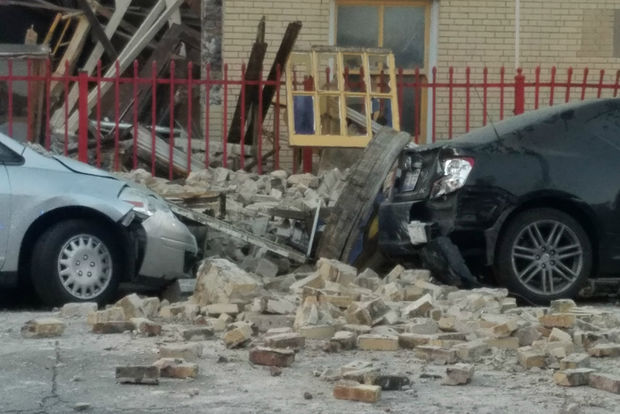 Originally built for Chicago's Serbian community, the building is not listed in a city database of architecturally significant properties, though it is located just across the street from Wicker Park's historic namesake park and carries historic significance in the Serbian community.

Radoje Popovich, 69, who owns an apartment building across from the church, called the collapse "sad."

"Our hope was that the structure was staying. Now it is gone," he said by phone from Colorado while on vacation.

Ventura, who lives in Popovich's building, said the loss of the building was a loss for the community.

"The Serbian church wanted to salvage the stained glass windows, but the developers busted a hole in the glass," said Ventura, who called the church "a historical representation of the Serbians who moved into Wicker Park."

Mision Cristiana Family Ministries, which previously held weekly church services at Schiller and Evergreen streets and Wicker Park Avenue, "opted out" of being part of Wicker Park's Landmark District when it was created, thus exempting it from certain laws that prohibit renovations or demolition, Ed Tamminga, chairman of the the Wicker Park Committee's Preservation and Development subcommittee said in April 2015.

A 2003 appraisal estimated the building to have been constructed 80 to 100 years ago.

State records show the church is owned by Development Management Holdings, an entity headed by Alex Zdanov and Igor Blumin of Northbrook-based Interforum Holdings, who were leading the redevelopment.

Zdanov and Blumin did not immediately return several requests for comment, however, Blumin later reached out to say that the collapse was "devastating."

"It's all speculation, all in the rubble right now. We think the wall collapsed by itself. Obviously it’s an old structure. I don’t have the answer, maybe we will never find out," Blumin said.

Blumin also wanted to emphasize that the corner site encompasses three separate addresses, including the church and an apartment building, and that he had been waiting for a construction permit for one of those addresses at the time of the collapse.

City building records show that the developers had received two permits for 1901-1907 W. Schiller St. to "remove and replace 200 sheets of drywall" and "remove cover for electrical receptacles and switches and reinstall them after drywall will be replaced." Both were issued on April 27, 2016.

Records on Chicago Cityscape, a website that tracks building permits, also shows additional permits were applied for at two other addresses that are part by the massive building which straddles both Schiller Street and Evergreen Avenue.

A spokeswoman for the Dept. of Buildings, said a building permit had been requested to convert the property to a single family residence but that "the permit has not been approved and any work done on this building was not authorized."

Back in July, the city slapped a "stop work order" on the project, according to Chicago Cityscape.

Work was ordered to stop because the owners had "performed or allowed work to be performed without submitting plans prepared, signed and sealed by a licensed architect or registered structural engineer for approval and without obtaining a permit to perform the work," the city said.

A source familiar with the project told DNAinfo that an inspection on July 5 determined that work was being performed beyond the scope of [the] permit. As recently as last week, the group had applied again for a building permit to convert the building into a single family residence but that plan has not been approved.

Tamminga, on behalf of the members of the Wicker Park Committee's Preservation and Development subcommittee, said in a statement, "We are lucky that it appears no one got hurt, but the situation raises serious concerns about construction safety and the need for proper care in shoring up structures during demolition."

The Wicker Park Preservation and Development Committee had reviewed plans for the renovation and were thrilled to be able to work toward saving a neighborhood church building. It is a shame that we have lost another church building, and that two of the historic structures adjacent to the church and part of the former church complex may be in peril as well," the group said. 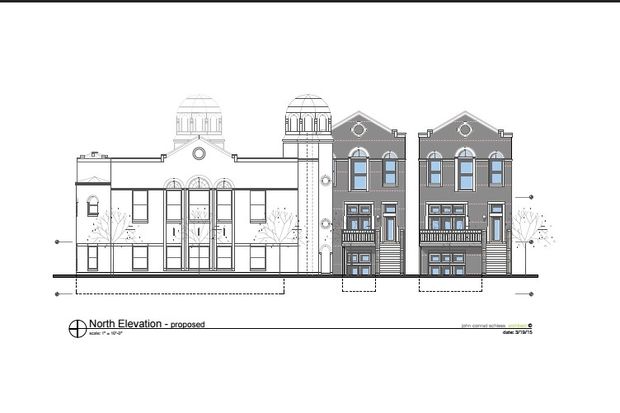 A rendering of the planned church-to-residential conversation. [Courtesy of Wicker Park Committee]

Tim Inklebarger, a reporter for Oak Park-based Wednesday Journal, had parked his now half-crushed 2006 silver Nissan Versa, on the Schiller-facing side of the church.

"I'm glad no one was hurt. [The car] is going to be towed by the city later today," Inklebarger said.

Tatiana Tien had been borrowing her mom's car, a Honda Elantra, and parked it next to the Evergreen-facing side of the church. Tien said a tree fell on the car when the church's southern wall collapsed.

"This isn't what you want to wake up to and see in the morning," Tien said. 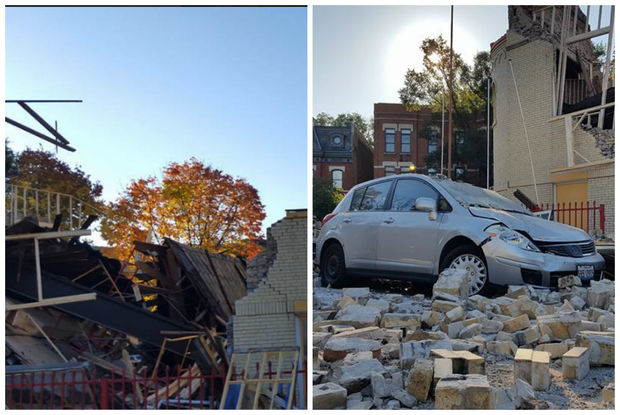 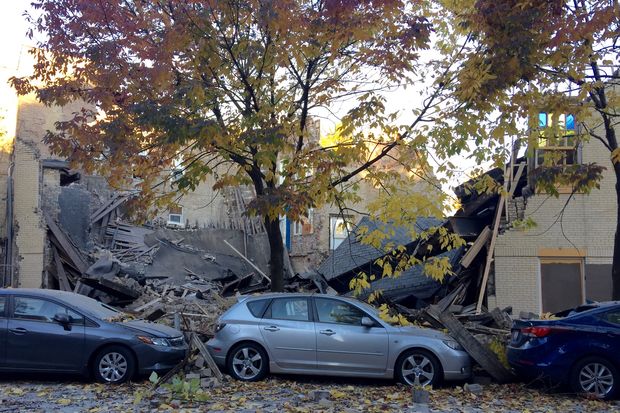 The southern wall of the church collapsed. [Grant Drutchas] 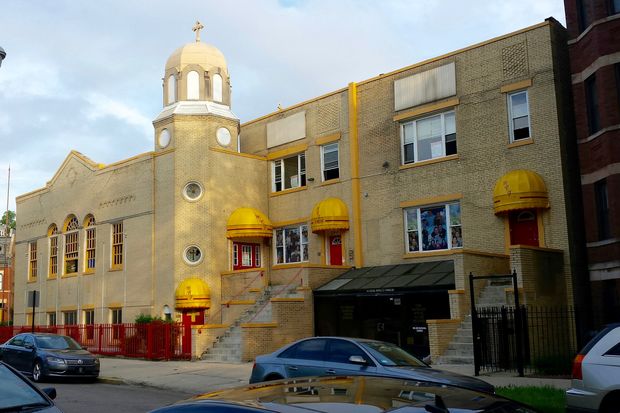 What the church looked like in early June 2016. [DNAinfo/Alisa Hauser] 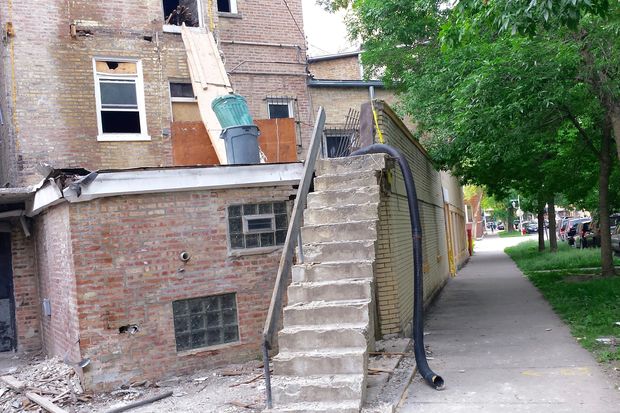 The apartment building attached to the church was home to squatters in June. [DNAinfo/Alisa Hauser]