CHICAGO — One restaurant’s inevitable — and perfectly edible — trash could be your dinner.

That’s the idea behind BuffetGo, a Los Angeles-based business that partners with restaurants to sell what’s left of their hot food at the end of the day — often for less than the price of, say, a pumpkin spice latte — so it doesn’t end up in a dumpster.

Baker Miller, the bakery and cafe in Lincoln Square, is one of the two participating Chicago restaurants. The other is Yummy Buffet, an Asian fusion restaurant at 3925 W. Lawrence Ave.

The BuffetGo website lists the restaurants — mostly hotel, seafood and Asian buffets — along with their daily discounts. There’s a limited number of meals available at each eatery.

Listen to Janet describe the concept behind BuffetGo.

Customers reserve and pay for a meal on the site, then go to the restaurant at a specified time, usually within 30 minutes of closing, and show their order confirmation. They’re given a takeout box that they can fill with whatever food is left.

At Yummy Buffet, you'd pay $12.50 for unlimited trips through the restaurant’s four buffet lines during normal business hours. A BuffetGo order costs $3, including tax, for what amounts to about 3 pounds of food, says owner Tony Lin.

Entrepreneur Emil Rosengren Lolby started BuffetGo in 2014 in his native Denmark before expanding to Los Angeles and New York. There are at least four similar startups operating across Europe that were inspired by BuffetGo, he said.

“They throw the food out anyway. Why not do something with it?” said Lolby.

The concept works a little differently at Baker Miller, which serves pie, pastries and savory items such as egg-topped heirloom grain bowls and biscuits and gravy, but isn’t a buffet.

“We build them what we call a ‘kitchen sink bowl.’ It’s almost like our staff meal,” said owner Dave Miller. “And then if we have any pastries left over, usually we’ll throw in a pastry or a loaf of bread.”

On Thursday, a customer picking up within the 15-minute window would have gotten ratatouille hash, salad, a biscuit and a slice of pumpkin pie — for $2. The hash alone costs $10. 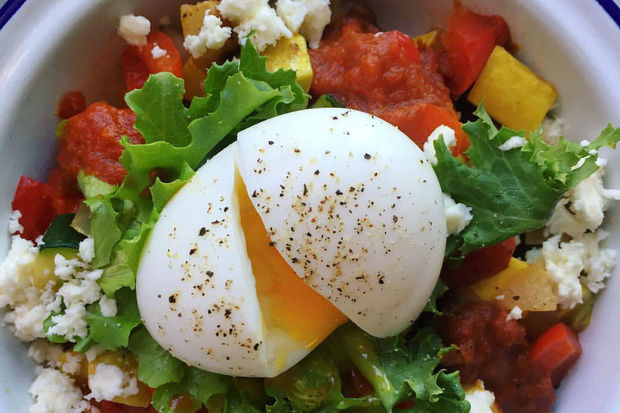 This egg-topped ratatouille bowl at Baker Miller is an example for food you can get for cheap through BuffetGo. [Baker Miller/Facebook]

In the three weeks since signing up with BuffetGo, Miller said he’s had a handful of takers every day. He allots a maximum of five BuffetGo orders a day.

But that's more than enough to ease the burden of wasted food on his bottom line and his psyche, he said. The restaurant donates pastries weekly to a local food pantry, but unfortunately it can’t do the same with hot items. Baker Miller's Hot Bar in Ravenswood, which isn't part of the BuffetGo service, typically sells out daily.

“Every portion I throw away, I have to sell three of those dishes just to cover the loss of that one portion. So for me, it’s almost better to run out of things than to have leftovers,” Miller said. "But we also want to always be able to serve our customers. So this bridges that gap. It gives people a really fair, affordable meal and helps us cover something that would normally be lost.”

Miller said he will likely raise his BuffetGo price to $3, based on demand.

Lin at Yummy Buffet is having a trickier time with the BuffetGo model. One woman showed up much earlier than the designated time. Customers were still eating from the buffet, so Lin had to ask her to wait.

On the other hand, on slow weeknights when the dining room is empty, Lin prefers to close earlier than the usual 10 p.m.; it’s not worth it to keep the lights on and the food out, he said. But now what happens if a BuffetGo customer shows up?

"It’s better they call so we know they are coming,” Lin said, adding, “The idea is very good. We want to do this, but it's hard to control."

Lolby said he is looking to add more restaurants in Chicago and elsewhere. He has hired five more employees, including one person for the Chicago market.

“We’re targeting all of America,” he said.