WRIGLEYVILLE — After an historic, come-from-behind win to clinch their National League Division Series, the Cubs celebrated through the night and arrived in Wrigleyville at dawn to a throng of ecstatic fans.

The Cubs scored four runs in the 9th inning to beat the San Francisco Giants 6-5, taking the best-of-5 series 3 games to 1. After partying on the field, dumping champagne and beer on each in the locker room, the players headed back to Wrigley Field. Some got on the jet still soaked.

The team will face either the Washington Nationals or the Los Angeles Dodgers in the National League Championship Series, which begins Saturday at Wrigley Field. The Nationals-Dodgers series is tied 2-2.

This is the one...the nerves still shaking, champagne soaked t-shirt, no words, tears in your eyes, (literally) tak… pic.twitter.com/mj9i4LCyXi

• Jumping On The Cubs Bandwagon? Here's What You Need To Know

Before Tuesday, the Cubs had won only four postseason series in franchise history: World Series in 1907 and 1908 andNational League Division Series in 2003 and 2015.

So fans in Wrigleyville soaked it in Tuesday night — even though the ballgame was being played in San Francisco.

While a win at Wrigley Field would have been more fun, "a win's a win," said Katie Shutt, 25.

Shutt and a group of friends spent the last two nights at Old Crow, hoping to see a clinch for the team she's supported her whole life but never has seen go all the way.

It was an emotional night as the Cubs trailed the Giants for most of Game 4, Shutt said.

"When they got that extra [run] in the ninth inning, you're just crossing your fingers and holding the table, hoping," the River North resident said.

The win was a "great surprise," and Shutt said it could be the year the Cubs win it all — an eternal optimism she said is characteristic of Cubs fans.

"You've got to stick it out and see it through to the end and hope for better next time," Shutt said. But with the win, "we luckily didn't have to."

"I thought I was going to be sick the entire night," said Matt Redmer, who joined his friend Brian Benhart at Old Crow for all three of the Cubs' NLDS wins.

"I watched at my cousin's," Benhart said. "Grave mistake."

But the duo returned to Old Crow to remedy their superstitious error, with Redmer even wearing the same outfit he wore Friday.

"The mojo is going," Benhart said.

They'll return Saturday for Game 1 of the NLCS, joking that they will try to reserve the 8 feet of bar space they occupied Tuesday.

Near the Wrigley Field marquee celebrating, Louis Uhler of Heart of Chicago said the comeback was "amazing" but also characteristic of this Cubs team.

He said he's optimistic the Cubs can make a strong bid for the World Series.

A crowd of about 50 people gathered outside the Cubs marquee to dance and sing, and police worked to keep people on sidewalks. Traffic was not closed on Clark Street. 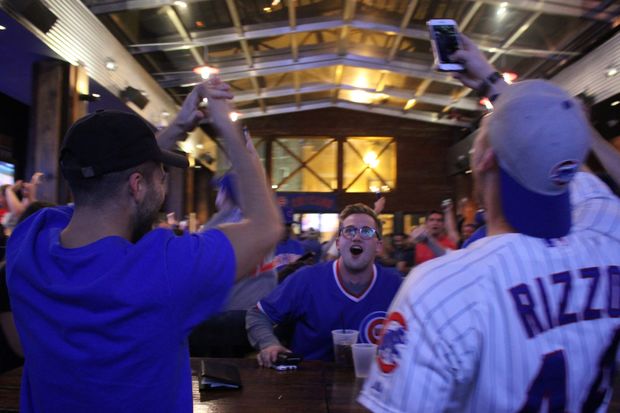 A Cubs fan looks up in amazement as the Cubs clinch the National League Division Series. [DNAinfo/Ariel Cheung]

While Cubs fans still came out to the neighborhood Monday, few stuck it out for the five-hour game that carried into the early hours of Tuesday.

"Drunk people have commandeered construction equipment and are operating it in the rear." Newport and Clark#Wrigleyville#ChicagoScanner

A couple hours into the game Tuesday evening, bars were half-full or entirely empty, with Monday's game leaving fans tired and more likely to stay home. Except for people gathered at the ever-popular John Barleycorn and Old Crow, crowds were small even at some Wrigleyville mainstays.

The quiet left little for Chicago Police to do, despite having almost as large a presence as the weekend home games that started the series.

Left to patrol an emptying neighborhood, officers breezed through checks of nearby bars before many clustered around business windows for a glimpse of the game, which ended about 1:45 a.m.

The team returned from their West Coast conquest early Wednesday morning, popping into the Wrigley clubhouse before resting up for the next series.

Long after the team left, a steady stream of fans visited the stadium plaza to take selfies in front of the marquee.

Marisol Perez, rounding out a week-long visit from Puebla, Mexico, posed next to the statue of Ernie Banks on Sheffield Avenue. Perez had come to run the Chicago Marathon on Sunday, but she managed to get a ticket to Game 1 of the division series on Friday.

"It was amazing, I couldn't believe how crazy everyone was," Perez said. "I've never seen anything like it."

"I know they'll make it all the way [to a World Series championship]," she added. "They have to!"

Nancy and Dylann Sennstrom have both been waiting their whole lives for a championship. They're ready to #FlyTheW #Wrigleyville pic.twitter.com/4PlaqJ4Ia0

Even Gilberto Rivera whipped out his phone to take pictures, even though he comes to the stadium every week to drop off a shipment of water bottles.

"It just feels different this year — like the whole city is ready for this," said Rivera, who's rooted for the Cubs since he moved to the city 20 years ago. "It's like last year, but even more excitement. There's this feeling like they could really pull it off this year."

Breaking news out of Wrigleyville. #FlyTheW

• Post Pictures Of Cubs Playoff Tickets At Your Own Risk, Team Says

• What To Expect In Wrigleyville This Postseason? No Champagne, For One Thing

• 5 Cubs Collectibles That Will Knock Your Socks Off