RAVENSWOOD — A group of parents and their children took to Mayor Rahm Emanuel's block Monday, asking him to avert a teachers strike and "stop the bleeding" at CPS.

As the Chicago Teachers Union enters its last-ditch bargaining session before a possible strike starting Tuesday morning, the group Parents For Teachers rallied near Emanuel's Ravenswood home, saying the mayor has the power and the ability to stave off a third teacher walk-out since 2012.

"What's good for our teachers is good for our classrooms and therefore good for our kids," said Erica Hade, a mother of three CPS students. "The mayor has the power to avert a strike."

Specifically, the group is asking Emanuel to use funds from tax incremental financing, or TIF, accounts. TIFs, generally used to spur economic development within certain areas, have benefited the wealthy and developers over students and homeowners, the group said. 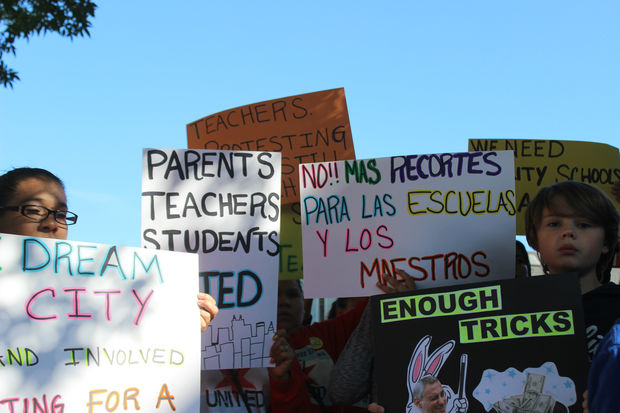 CPS students hold up signs in support of teachers ahead of a possible strike Monday in Ravenswood. [DNAinfo/Joe Ward]

"We're asking Mayor Rahm Emanuel today to stop the bleeding," parent Amy Ellison said. "I keep hearing language like 'cut to the bone.' We don't want to use this language in reference to our schools anymore.

"We don't want out children to be in environments that [Emanuel] would never subject his own children to," Ellison said.

The group met at the end of Emanuel's block before marching down the street. Parents and students then split off and knocked on doors, asking neighbors to support extra funding for CPS that would avert a strike.

With less than a day before a possible teachers strike, the parents wanted to directly appeal to Emanuel and his neighbors, saying they might have more sway and the ear of the mayor.

"We are asking the mayor's neighbors to call him ... urge him to avert this possible walk out," said Huu Nguyn, a Logan Square resident and CPS parent. 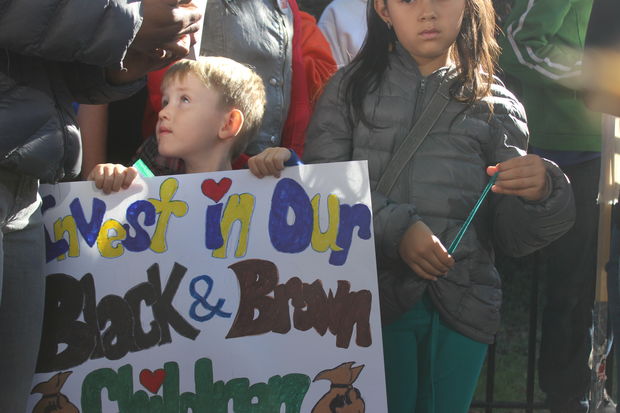 Stella Glick, a fourth-grader at Stone Academy in West Ridge, said she was having fun on her day off from school Monday for Columbus Day. But she said she wanted to return to school Tuesday.

"Because I like to learn and I want to see my friends," she said.

Parents want their kids in school tomorrow, too, although perhaps for different reasons than their kids.

Kim Jeffries said with rising violence in Chicago, kids cannot afford to be out of school.

"When the kids are out of school, we all get hurt, in more ways than one," she said.