UPTOWN — Three protesters were arrested for trespassing after occupying the alderman's office for several hours Monday night in a protest over gentrification in the neighborhood.

Around 9 p.m. Monday, Andy Thayer, Ryne Poelker and Marc Kaplan were arrested after refusing to leave the Ald. James Cappleman's 46th Ward Office, 4544 N. Broadway until the demands of protesters were met.

About a dozen officers were on site to arrest the trio. They were taken into custody and charged with trespassing, according to the Chicago Police Department.

The arrests followed a press conference and march to Cappleman's office, organized by Northside Action For Justice, Uptown Tent City and the Gay Liberation Network, that began around 5:30 p.m. at the intersection of Wilson Avenue and Lake Shore Drive.

The protest was a culmination of "a several years' war between a gentrifying alderman and proponents of a mixed income, interracial community," according to a press release for the event.

"We’re out here today because the city has conducted a relentless campaign of harassment against the homeless," said Thayer, of the Gay Liberation Network, at the protest Monday.

"We have seen sweeps right down here every Friday starting a few weeks ago and, supposedly, going through the middle of October. These sweeps done under the guise of cleanings are nothing short of harassment," he said.

The end of the "harassment" was one of several demands organizers laid out, which also included increasing funding to existing, affordable housing and providing new funding to institute a "housing-first strategy" to resolve homelessness.

Activists also pointed to the recent clearing of a tent encampment near Graeme Stewart School, 4525 N. Kenmore Ave. and the slated closure of a men's shelter located in the Preston Bradley Center, 941 W. Lawrence Ave., as examples of "the City favoring private developers" over the needs of the homeless.

"We have to say that this cannot stand. That we are going to be out here, we are going to be marching, we’re going to be demanding until this illegal unconstitutional harassment of the homeless ends," said Thayer, adding the shelter could be saved with about $100,000 in funds, "yet we’ve got $15.8 million slated to go to luxury high rises."

More than 100 people gathered and marched from the tent encampment west on Wilson Avenue to the alderman's office Monday, shouting "Uptown for everyone" and "housing is a human right, not just for the rich and white."

"We see time after time TIF money being used on upscale projects that raise the cost of living in communities, not lower it. And meanwhile we have a homeless shelter that only needs $100,000 to stay open," said Poelker, adding that keeping the shelter would save more people from being forced to live on the street.

Around 6:30 p.m., a handful of the protesters were allowed inside the alderman's office accompanied by media and Town Hall District police officers. While Cappleman said he "absolutely" agreed with some of their demands, he would not throw support behind requiring new developments to have 33 percent of the units to be affordable to low income residents and abolishing the Zoning and Land Use Committee and replacing it with one more representative of the racial, ethnic and economic diversity of the ward, as protesters specified. 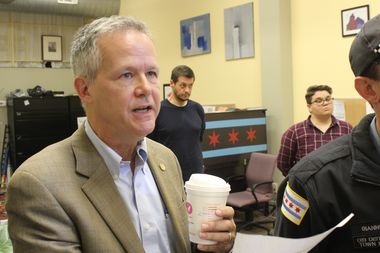 In response to allegations about the harassment of homeless people, Cappleman said: "I do not support any form harassment of the homeless.”

In response to requests for preserving all existing, affordable housing, including the shelter at the Preston Bradley Center, the alderman said he "will work with our state reps to get that funding."

And in response to finding funding to institute a "housing first" model to address homelessness, he said he agreed "1000 percent" and that such an approach was "desperately needed."

"I have been urging city officials for years to use a 'housing first' model to address homelessness and was glad to see this begin to be implemented with the Chronic Homelessness Pilot Program in Uptown," he said in a statement Monday before the protest.

"I will continue to push the mayor and the Department of Family and Support Services to use the 'housing first' model."

Cappleman also reminded protesters that Uptown "continues to have the most subsidized housing for those residents that have little or no income."

While the Chicago Sun-Times recently named South Shore "the new subsidized housing capital of Chicago," numbers from the Department of Planning and Development Low Income Housing Trust Fund show Uptown has more units and received more total funding than any other neighborhood.

As of June 30, Uptown received about $1,800,000 for 423 units through the Low Income Housing Trust Fund, compared to South Shore receiving about $1,670,000 to support 245 units of housing, according to numbers obtained by DNAinfo.

"I think Uptown is a model for the rest of the City in providing subsidized affordable housing for the most vulnerable," he said.

The three protesters were released around midnight Tuesday morning. 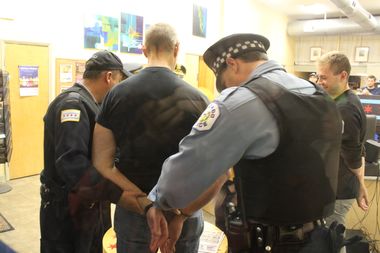 Andy Thayer was arrested along with Ryne Poelker and Marc Kaplan for trespassing during a protest Monday night. [DNAinfo/Josh McGhee]