NORTH CENTER — The truck driver who fatally struck a 23-year-old Loyola University graduate near Damen and Addison on Monday has been ticketed in the accident, police said.

Anastasia Kondrasheva was riding her bike northbound on Damen Avenue south of Addison Street when a flatbed truck driving next to her made a right turn onto Addison Street, hitting her in the process, police said.

The driver was issued a ticket for failing to exercise due care to a pedestrian in the roadway, police said Tuesday.

The driver remained on the scene after the crash police said, and he ended up having to leave in an ambulance due to being too "distraught," said a coworker of the driver who came to help police with the truck.

"I heard him on the phone, he was crying," Sanders said at the scene. "It's in his head. He's distraught."

Adrian Juarez, Kondrasheva's boyfriend, said he was shocked to hear that the driver will not be charged in her death.

Kondrasheva worked in a health care center after graduating from Loyola University with a biology degree last year. Co-workers believe she was on her way to work when hit by the truck.

She was riding her bike north on Damen Avenue south of Addison Street about 7:50 a.m. Monday, according to Officer Bari Lemmon, a Chicago Police spokeswoman.

The driver of a small flatbed truck was also driving north on Damen Avenue when he turned right onto Addison and struck the woman, Lemmon said.

Juarez told DNAinfo he started to worry after Kondrasheva's employer called him and said she hadn't showed up Monday morning. That's when he saw news reports of an accident involving a bicyclist.

"I saw the picture and it was her bike," the boyfriend said. "This was the route she always took." 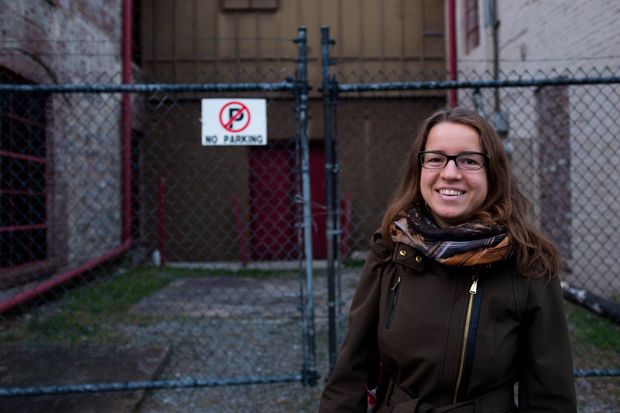 They knew their co-worker was the victim, one employee said, because "she never calls in sick."

On Tuesday, Harken issued a statement to DNAinfo saying they were "very saddened" to learn of Kondrasheva's passing, whom the staff called a "colleague and friend."

"She was an exceptionally valued care team member, and our deepest condolences go out to her family and friends," Harken said.

The boyfriend said he was with the woman's family and "we can't believe it...it's just shocking."

The young woman died at the scene, police said. Her body remained there for hours after the accident Monday morning as the major accidents unit for the Police Department investigated the collision. Her bike lay beside her, mangled with a few pieces broken off.

Kondrasheva's boyfriend said she loved nature — water, forests. She was vegan, interested in animal rights causes. She loved the earth too much to eat meat or byproducts, he said. She made an online video applying for a PETA job, describing her animal rights beliefs.

She also wanted dreamed of being an acrobat, and was even taking trapeze classes.

"Her dream as a girl was to perform in front of people and make them happy so she was learning how to do that and join the circus one day," Juarez wrote to DNAinfo. "As well as get her medical degree."

Kondrasheva will be honored with a ghost ride on Friday night, according to a tweet Tuesday from BikeCHInorth.

Damen and Addison is busy intersection for both cars and bikes. This sign is across the street from an accident that killed a woman. (DNAinfo/Joe Ward)