Twitter Facebook Email More
Brown Line trains between Kimball and Southport were temporarily suspended after a train crashed with a vehicle near the Francisco station Monday afternoon, the agency said. The car was photographed just north of the CTA tracks.
View Full Caption
DNAinfo/Patty Wetli

CHICAGO — Brown Line trains between Kimball and Southport were temporarily suspended after a train crashed with a vehicle near the Francisco station Monday afternoon, the agency said.

"I heard a big crash so I looked out the window immediately," said Kristina Delvalle, who lives in the building just south of the Francisco station.

The woman driving the car was able to walk away from her vehicle but was still taken away in an ambulance, according to staff at First Slice Pie Cafe, 4664 N. Manor Ave.

Witnesses told both Delvalle and First Slice staff that the woman was stopped on the north side of the grade-level track, with the crossing gates down. When the gates went up, the driver proceeded to cross the tracks, only to have the gates come back down, trapping her car on the tracks.

"They were visibly shaken," she said of the riders.

Brown Line service has been temporarily suspended between Kimball and Southport due to a collision with a vehicle. Shuttles provided.

The agency was operating shuttles between Kimball and Southport, but resumed using the tracks shortly after.

Service on the Brown Line is resuming after an earlier collision with a vehicle near Francisco with residual delays. 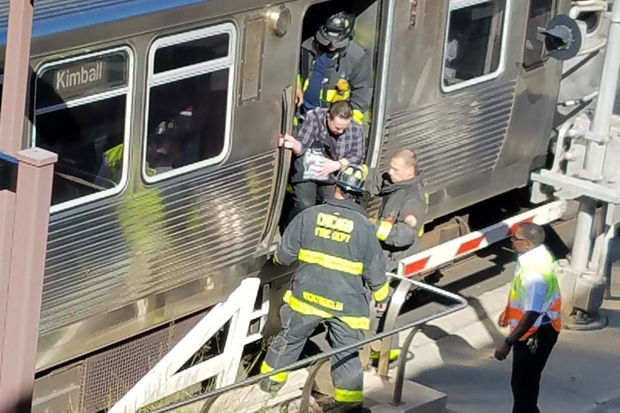 Firefighters help passengers off a stopped train that crashed into a car near the Francisco Brown Line station. [Kristina Delvalle] 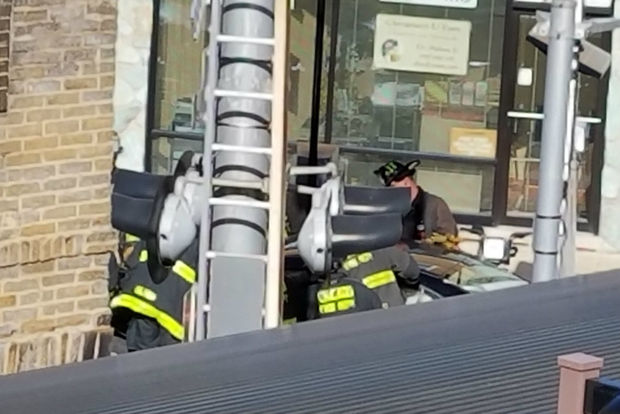 Firefighters on the scene of a crash near the Francisco Brown Line station. [Kristina Delvalle]