By Howard Ludwig |&nbspSeptember 23, 2016 5:41am
@howardaludwig
Twitter Facebook Email More
John C. Burke was on patrol with the Chicago Police Department when he was shot and killed Dec. 16, 1915. His headstone went missing in June and has since been replaced by the Chicago Police Memorial Foundation.
View Full Caption
DNAinfo/Chicago Tribune Archive

MOUNT GREENWOOD — A ceremony will be held at 1 p.m. Sunday to honor Chicago Police officer John C. Burke, who was killed in the line of duty pursuing the "Red Pepper" bandit a century ago.

The ceremony at Mount Olivet Cemetery, 2755 W. 111th St. in Mount Greenwood will re-dedicate Burke's headstone, which went missing in June, according to Martin Gainer, a retired Chicago Police sergeant.

The new headstone was paid for by the Chicago Police Memorial Foundation. The effort to replace the stone was launched by Burke's large, extended family — many of whom have also pursued careers in law enforcement, Gainer said.

"My uncle was killed 100 years ago. And to the Memorial Foundation, it was as though he was killed last week," said Gainer, his voice cracking from emotion.

Burke, 29, married Gainer's grandmother's sister, Rose Flanigan. The pair were wed for just two months when Burke was killed by the delivery truck robber known for throwing red pepper into the eyes of his victims to avoid a pursuit, according to reports published in the Chicago Tribune.

"Don't wait for dinner for me, Rose. I'm going to get that red pepper robber, and I'll be late," the newspaper reported Burke saying the morning of his death on Dec. 16, 1915. 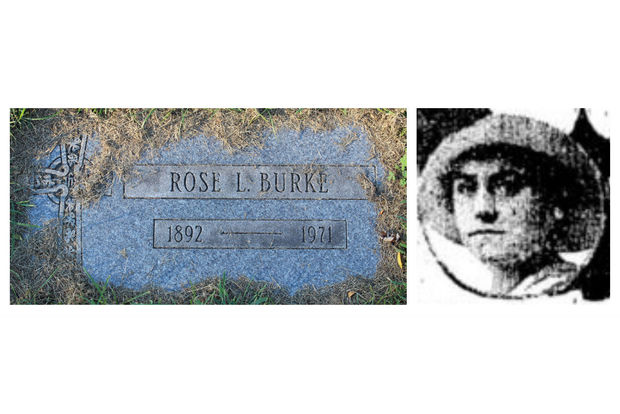 Rose Burke was married to the late John C. Burke for two months before he was killed in the line of duty. The Chicago police officer was shot just above his star, which was bent as a result and hangs in police headquarters. [DNAinfo/Chicago Tribune Archive]

Three shots were fired at Burke in the alley that afternoon. The fatal bullet struck him near his heart, bending the Chicago Police star on his chest. The bent star — No. 1287 — hangs at police headquarters, along with 575 others belonging to officers killed in the line of duty, said John Gordon of the memorial foundation.

"We try to keep all of them top of mind," Gordon said of the line-of-duty deaths. "Our motto is, 'Never Forget,' and we try to hold true to that."

Gainer approached Gordon about replacing the headstone. The pair had come to know each other before Gainer retired in 2010 after 25 years working with police department. His final years were spent working in the district near his Morgan Park home.

"Any police officer who has been on the force for a while knows someone who has been killed in the line of duty," said Gainer, who moved to south suburban Tinley Park after his retirement.

He thought that perhaps the foundation would offer to pay for half of the headstone. Instead, the group quickly approved $950 to pay entirely for the new stone and worked with Gainer to have it installed. 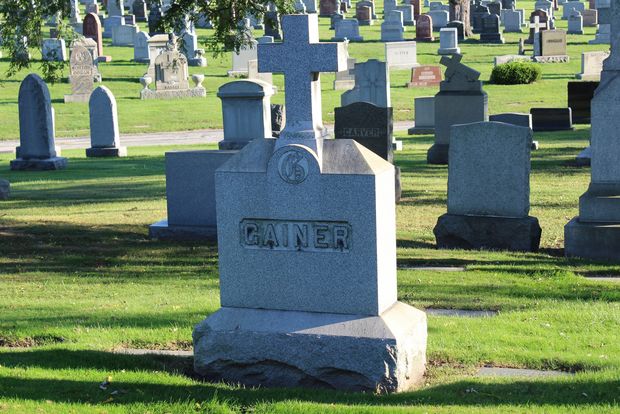 The Gainer family's plot at Mount Olivet Cemetery in Mount Greenwood is near the headstone of John C. Burke. The stone for the Chicago police officer that was killed in the line of duty went missing three months ago. [DNAinfo/Howard A. Ludwig]

The Rev. Dan Brandt, a chaplain for the police department, has been asked to perform the re-dedication ceremony. Gainer expects nearly 100 members of his family to be there as well. A bagpiper will also perform and members of the Brotherhood for the Fallen, a group of Chicago police officers dedicated to attending funeral services for fallen police throughout the country, have also been invited, Gainer said.

As for Burke's killer, William J. Lyle was later arrested in Nashville, Tenn. for having used the same red pepper technique, according to the 2006 book "End of Watch: Chicago Police Killed in the Line of Duty, 1853-2006."

Lyle was identified as Burke's killer by three delivery boys, according to the book's authors, Ald. Edward Burke (14th) and Thomas O'Gorman.

Despite Burke's tragic death, the Gainer family continued to pursue police work. In fact, Marty Gainer's grandfather, Lt. William Gainer, was the first of the family to join the police department in 1907. He and his wife, Mary, had six sons — three of whom also joined the department.

This was the beginning of an unbroken line that now spans 109 years with a member of the Gainer family employed by the city's police department. That said, Marty Gainer's father bucked the trend, working as a milkman and later as a dairy inspector.

But Frank Gainer and his wife, Mary, had 10 children, including seven boys. Marty was one of five boys who went on to work for Police Dpartment And there are three members of the Gainer family on the force today, Gainer said.

"Law enforcement — we jokingly call it the family business," he said.