CHICAGO — As the rat population in Chicago has "exploded" — and with it citizen complaints to city officials — the city is turning to a new method to fight the problem: dry ice.

At the end of August, crews with the city's Streets and Sanitation Department started putting dry ice — frozen carbon dioxide — into rat burrows and sealing up the holes with dirt and newspaper.

The new method, which has been tested in other major cities, is considered to be more environmentally friendly, cost effective and successful than other rat-abatement tactics like baiting and poison, city officials said.

This is how you use dry ice to kill rats. The city will test out the new method at North Side parks and downtown planters. pic.twitter.com/3jtzbtChj1

The city will try and replicate the success of cities like New York and Boston, which have seen inroads with the method, said Streets and Sanitation Commissioner Charles Williams.

"This is a relatively new alternative," Williams said. "We are excited to test its effectiveness here in Chicago."

A "pilot program" will be expanded to some neighborhood parks like Washington Square Park, 901 N. Clark St., Williams said. Crews will also try out the dry ice method at Downtown planter boxes on Wabash Avenue, State Street, Chicago Avenue and other streets, Williams said. It will run through the spring of 2017, when the city will determine whether to expand the effort.

As the dry ice warms into a gas, it suffocates the trapped rats, leaving them to decompose in the holes — away from people.

Though dry ice may be cheaper and safer alternative than poisons, Williams said the city's "driving issue" in turning to the product is its effectiveness. 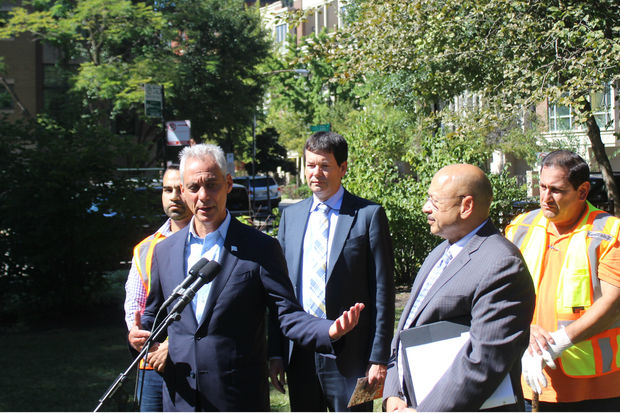 Williams said that in areas where dry ice has been used, the city has seen 60 percent fewer rat burrows.

The new rat abatement method comes at a time when the city's rat population is dramatically increasing, city leaders said. Complaints are up nearly 50 percent this year. The city is on pace to get 50,000 complaints this year. By comparison, there were 36,425 complaints to 311 last year.

Mayor Rahm Emanuel acknowledged that rat issues are "one of the more constant, regular complaints," received by his office and by aldermen. Ald. Brian Hopkins (2nd) said he hears as much about rat control as he does schools and crime.

"It's a serious problem," Hopkins said. "It's a public health issue. We need to take our game to the next level if we're to control the rat problem."

Emanuel championed the Streets and Sanitation department for tackling the issue in a "smarter and more effective" manner.

Using dry ice is a "much more proactive approach," Emanuel said. "We've been much more effective with less dollars."

Williams said dry ice may not completely replace poison, but it has proven to be effective for getting rid of rats in tightly enclosed spaces and might lessen the need to use poison in the long run.

Dry ice costs about 50 cents per pound, compared to $57 per 20-pound bucket for traditional poison, According to USA Today.

However, the rat-killing method is not without its critics. Anti-animal cruelty groups argue that nonlethal traps and keeping garbage cans sealed are still the best methods to get rid of rats.

Experts point to last year's mild winter and an increase in construction projects as reasons for the rat surge.