By David Matthews |&nbspAugust 30, 2016 5:19am | Updated on August 30, 2016 7:52am
@DavidLMatthews
Twitter Facebook Email More
The South Loop alley where a 45-year-old man was shot dead Sunday. Neighbors say the victim was preparing to move to be with his girlfriend and newborn child.
View Full Caption
DNAinfo/Alex Nitkin

SOUTH LOOP — The man shot dead Sunday morning in a South Loop alley was trying to leave Chicago so he could live with his girlfriend and newborn child in Florida, neighbors say.

William C. Smith, 45, was on his way to Dunkin' Donuts at 10 a.m. Sunday when he got into an argument and was shot in the head at 18th Street and Michigan Avenue, his neighbor Gary Leibovitz and local authorities said.

Smith was trying to sell his South Loop condominium so he could move to Florida, where his girlfriend and child live, Leibovitz said.

"He never got into any trouble ... he was a good guy, friendly to everybody," Leibovitz said. "He was just a regular guy in shorts and a T-shirt walking to get a cup of coffee."

RELATED: Police Talking To 'Person Of Interest' After Murder In South Loop Alley

Police said they arrested Robert Burgess, 56, for the shooting Monday night. Burgess, of the 6200 block of South Kimbark Avenue, was charged with first-degree murder.

The killing was the latest in the South Loop, where — like many other city neighborhoods — shootings have been more prevalent this year than anytime this decade. A shootout left a man dead and a police officer wounded just a month ago at the Battle of Fort Dearborn Park a few blocks from Sunday's scene.

The violence is "absolutely alarming" to Leibovitz, a real estate agent who was helping Smith sell his condo. Leibovitz said he and Smith were set to meet at 2 p.m. Sunday at their South Loop loft building, but instead Leibovitz saw his neighbor laying dead in an alley. 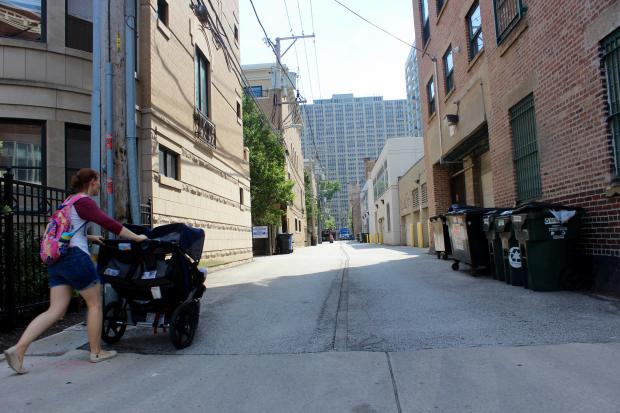 A mother pushes a stroller Monday afternoon down the alley where Smith was killed. [DNAinfo/David Matthews]

The day before the shooting, a group of children from Imazaki Dojo sold lemonade for charity at Kroll's, a bar around the corner from the alley. The event successfully raised more than $1,000 during Saturday's preseason Bears game, but Joy Nakayama, a sensei at the dojo, is worried about what's happening with the neighborhood.

"It's really scary," said Nakayama, who opened the dojo three years ago at 1720 S. Michigan Ave. "We're hearing from parents they may not stay in the South Loop, and it's really sad."

Nakayama and Leibovitz are just two neighbors who say — despite recent violence — they feel safe in the South Loop. But they sense something changing here, and not for the better.

"I feel completely fine, but then you see these stories," Nakayama said. "I don't feel an energy shift or anything ... but it's happening."

"I walk that alley every day," he posted Sunday on Facebook. "Now when I walk down that alley I will see that body. My friend's body. And feel numb."