RIVER WEST — Friends, family and members of Chicago's cycling community will gather next Saturday at an intersection near where 20-year-old Lisa Kuivinen was killed earlier this month and install a ghost bike in memory of the art student.

Kuivinen was riding a bike in the 800 block of North Milwaukee Avenue when the cyclist was hit by a truck and killed on Aug 16. Kuivinen had been an undergraduate student at the School of the Art Institute of Chicago, studying animation in the fine arts program.

Silma Kuivinen, Lisa's mother, speaking from the family's home in Rolling Meadows last week, described her child as "a wonderful person" who was creative and "uplifting."

The ghost bike memorial is set for 4 p.m. on Saturday, Sept. 3 near the intersection of Racine and Milwaukee Avenues.

The memorial is organized by Kristen Green, who volunteers with the Chicago Ride of Silence.

Each year, the Ride of Silence visits the ghost bikes during a procession from Daley Plaza through the city. Next year's ride is set for May 17.

Green said that she was in touch with Kuivinen's family to let them know about the memorial.

On Thursday, Ald. Walter Burnett (27th) extended his condolences to Kuivinen's family and said that he will work with area police to inform them of the gathering.

Ghost bikes are a tradition that began in St. Louis in 2002. The painted white bicycles are left at intersections where bicyclists are killed or injured on the street, serving as "a reminder of the tragedy that took place on an otherwise anonymous street corner," according to Ghostbikes.org.

The website estimates there are some 630 ghost bikes worldwide.

In Chicago, at least 20 cyclists have been memorialized with ghost bikes, although some are removed or stolen over the years. In 2013, one Chicago law firm offered to donate ghost bike racks as a more permanent tribute.

A funeral for Kuivinen was held earlier this week, according to an obituary.

Kuivinen was the third of four bicycling deaths this summer.

Blaine Klingenberg, 29, was hit and pinned underneath a tour bus, near Oak Street and Michigan Ave., in June. Virginia Murray, 25, was fatally struck in a right-turn collision in July while riding a Divvy in Avondale. Francisco Cruz, 58, was killed on Aug. 17 in a hit-and-run crash while biking in West Garfield Park. 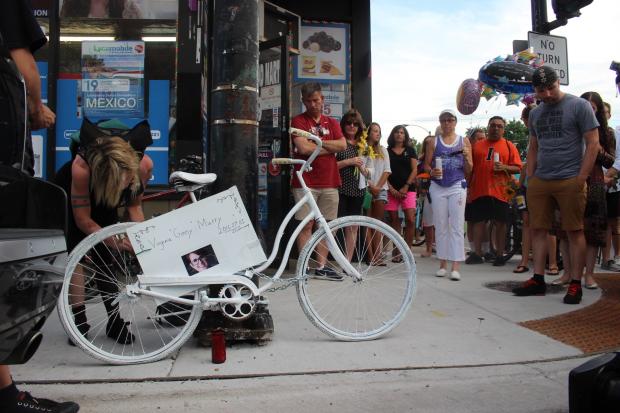 On Thursday, Green posted a video on Facebook of the bike for Kuivinen, donated by a member of the Chicago Bike Selling Message Board, being painted white.