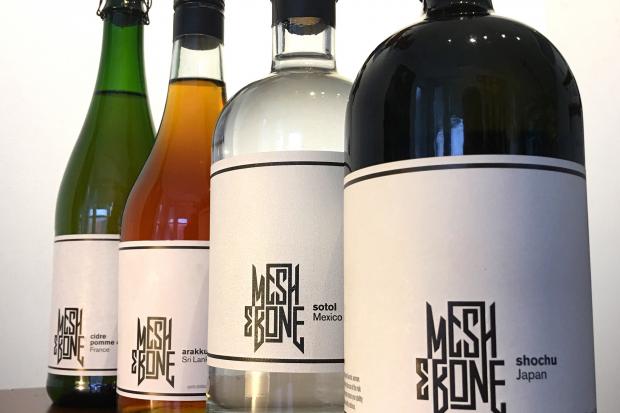 WICKER PARK — In the 20-odd years that Scott Crist lived and worked abroad — eight countries in all, most recently Japan — he ate what the locals ate, drank what they drank and did as they did.

Along the way, the Los Angeles native amassed all sorts of insight into each culture. And liquor. A lot of liquor.

“I was collecting these drinks for my own bar in my apartment, and I realized I had this whole portfolio,” said Crist, 43, who moved to Chicago in January.

There was Japanese shochu, cachaca from Brazil and spirits unheard of or unavailable outside of their native countries. Gatherings at Crist's place, whichever country he was in, were never dull.

“But in my mind, I was thinking about brand,” said Crist, whose career has gone from Silicon Valley venture capitalist to global director of marketing for Newell Rubbermaid (now Newell Brands). "Like, no one can really name a sake brand or a cachaca, whereas in America, it’s Starbucks and Nike and so many brands.”

So three years ago, while in Tokyo, he created his own brand, Mesh and Bone, focused on those elusive spirits he couldn’t find stateside.

Two weeks ago, the first four Mesh and Bone products started trickling in to shops, restaurants and bars around Chicago, from Sunda in River North to Masa Azul in Logan Square to Gene’s Sausage Shop in Lincoln Square.

The drinks are some of the world’s most distinct and obscure, veering all over the map. 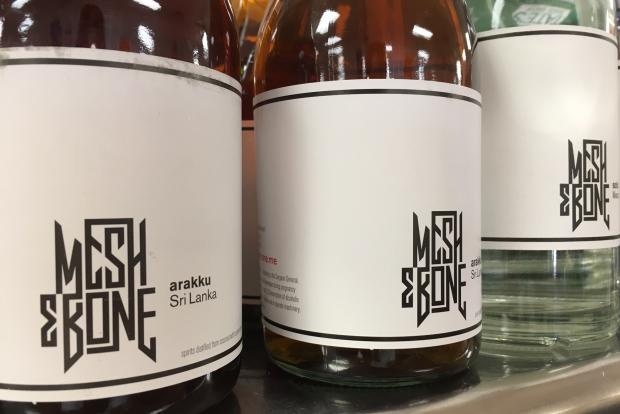 There’s cidre, or cider, made from fermented apples and pears in France’s Brittany region. Champagne-like, it’s a far cry from the overly sweet American stuff that Crist likens to "eating a Jolly Rancher."

Shochu, a vodka-like liquid distilled from barley, is popular in Japan, even more so than sake, and made according to strict government regulations as Champagne is in France. Mesh and Bone’s shochu uses water from the famed Hita basin, purported to have many health benefits.

Sotol is largely unknown even within its home country of Mexico, save for around the Chihuahua region where the desert spoon plant it’s derived from grows.

“You go to Mexico City, go to a big bar at the airport, go to Guadalajara, no one will know it,” Crist said.

One plant takes 15 years to mature and makes one bottle of sotol, which isn’t bracing like tequila or smoky like mezcal. Rather “it’s like tasting the desert after it rains,” Crist said.

Arakku, the fourth and most unfamiliar spirit in the Mesh and Bone lineup, is made from the sap of the coconut flower. It’s all but impossible to find outside of Sri Lanka until now. (It’s also called arrack, but arakku is the native term, Crist said.)

'It just blew us away'

"Arakku, who knows what that is?,” said Matthew Bringas, co-owner of Punt and Plume, 1324 W. Wrightwood Ave., the first Chicago shop to stock Mesh and Bone. “Honestly, I had to look it up because I didn’t believe them. I mean, c’mon, what comes from Sri Lanka?”

Obscurity, it turns out, is great for sales. A tasting at the Lincoln Park shop sold 25 bottles, which range in price from $15 for the cidre to $40 for the sotol. Customers have since been coming in asking for arakku, the best seller of the four.

“It just blew us away,” Bringas said.

Punt and Plume will hold another Mesh and Bone tasting on Aug. 20.

“One of the reasons I had to carry it is because it it so different than anything we have here,” said Yolanda Luszcz, co-owner of Gene’s Sausage Shop, which stocks the arakku and cidre and will soon add the others.

Bringas was skeptical when the long-haired, scruffy-bearded Crist first approached him.

“The guy was clearly a way-out hippie. I don’t think he’s worn shoes in years,” Bringas said. “But I looked on his website and that’s what they’re all about, adventure and shamans and this and that. Whatever. He’s awesome.” 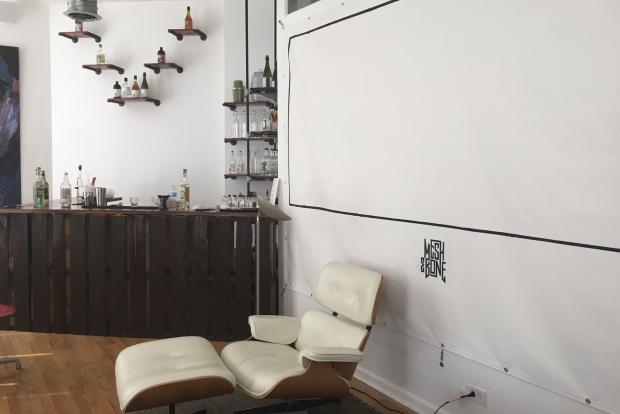 Mesh and Bone is based out of Scott Crist's Wicker Park apartment. [DNAinfo/Janet Rausa Fuller]

You can't follow the company or Crist, for that matter, on social media, either; the accounts are locked. He declined to be photographed for this story.

The labels on the bottles list only what’s required by federal law. The company logo is a blank box, basically.

It’s not that Crist doesn’t want to make it difficult for people to find Mesh and Bone. (The spirits also are for sale at Paulina Market in Lakeview and Standard Market in Naperville and in rotation or in the process of being added at more than six bar and restaurants in the city and suburbs.)

But a knee-jerk approach to sales and marketing, with the tidy, beautiful website, heavily styled Instagram feed and constant stream of tweets and Facebook posts — the “noise on the Internet,” as Kevin Georges, one of the 10 co-owners, puts it — just isn’t the Mesh and Bone jam, man.

“I didn’t want to say anything. I got so tired of selling. I got tired of marketing,” Crist said. "I want to give the consumer the thrill of discovery. Mesh and Bone is purely about discovery.”

Also, he and Georges said, what their data-driven consumer research tells them is that people value word-of-mouth more than a website pushing a brand. 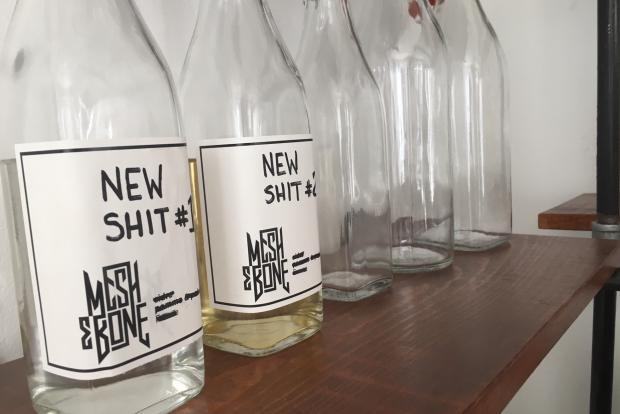 Yet-unnamed spirits are in development at Mesh and Bone. [DNAinfo/Janet Rausa Fuller]

Inside the 'Mesh Lab'

Mesh and Bone headquarters is Crist's apartment above a popular doughnut shop in the heart of Wicker Park. It's nicknamed the Mesh Lab, where impromptu tastings are held with friends and prospective clients.

Shochu tastings take place in a front room that Crist calls the Japan Room. The floor is covered with tatami, the traditional Japanese straw mats he brought back from his travels. Crist said it took three years, and approval from the Japanese government, to be able to produce Mesh and Bone shochu. In what he calls an unprecedented twist, it will be sold in Japan starting next year.

Crist talks in the laconic style of a Southern California surfer dude (which he is). He’s also a Stanford alumnus who speaks several languages and can easily slip into the technology and brand marketing lingo of his previous careers.

The Mesh and Bone team consists of friends and friends of friends, men and women, around the world, including in the countries where the four spirits are made.

He and Georges, who moved to Chicago from Paris a month ago, were roommates in Tokyo. His 21-year-old cousin is the youngest partner; the oldest is 50. 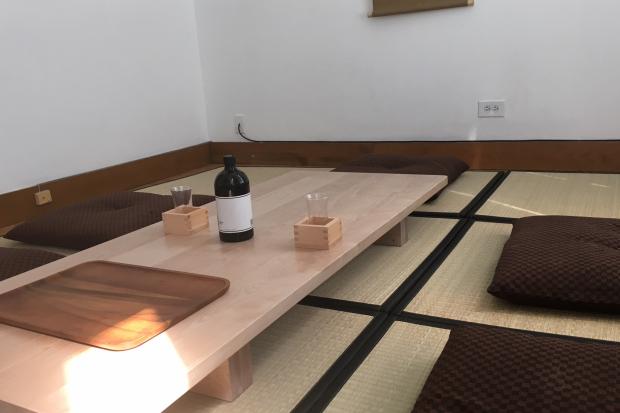 Mesh — that’s what this group does well, Crist said.

As for the bone part, “I did consumer research in so many markets and I saw how teenagers were the same in Sri Lanka as they were in France or anywhere. We’re all flesh and bone,” he said.

That’s the official line, anyway. He acknowledges that unofficially, mesh is an acronym for “make epic sh— happen” and, well, bone is a NSFW euphemism for another activity.

Around 10 a.m. on a recent Thursday, Crist and Georges were feeling the effects of the previous night’s caipirinha tasting in the Mesh Lab. Crist had just woken up. He was barefoot.

They’re developing a cachaca, the base spirit in a caipirinha, to add to their portfolio, which Georges said they initially envisioned to include 20 spirits.

Their research is ongoing into other beverages from other corners of the world — Cambodia, Vietnam, Hungary, Kazakhstan — that would fit the Mesh and Bone label and might not get exposure otherwise. 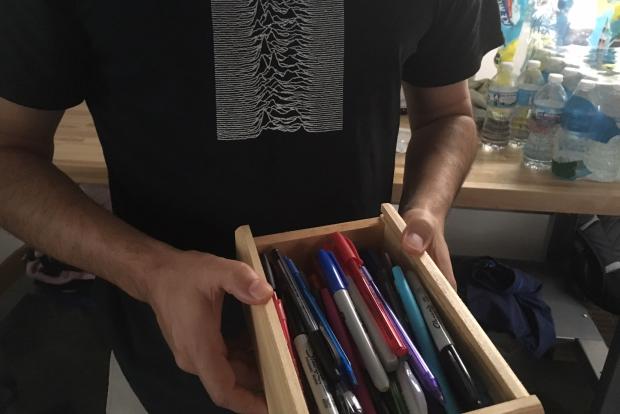 Mesh and Bone's Scott Crist holds a box of items for which he led global marketing campaigns, including the iconic Sharpie pen. [DNAinfo/Janet Rausa Fuller] 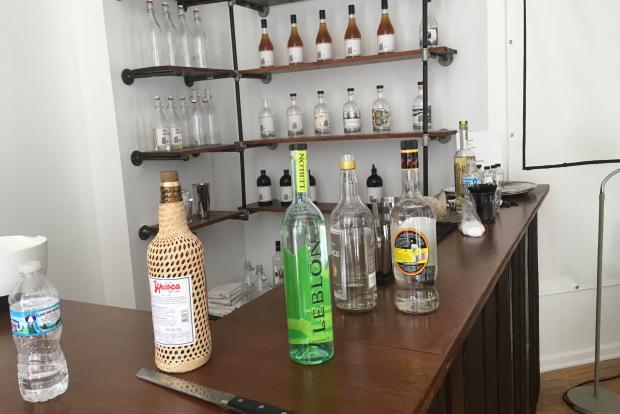 This is what the morning after a tasting at Mesh and Bone looks like. [DNAinfo/Janet Rausa Fuller] 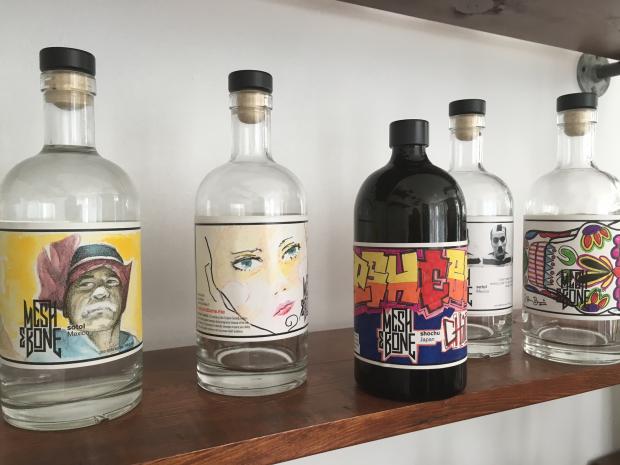 Customers have taken to drawing on the blank label of the Mesh and Bone bottle. [DNAinfo/Janet Rausa Fuller]