New Chef At Bistro Campagne Shakes Up Menu, But Adheres To Founder's Ethos

That's the dilemma Bistro Campagne, 4518 N. Lincoln Ave., has grappled with since the untimely loss of its founding chef/owner Michael Altenberg, 48, who died suddenly after experiencing breathing problems in 2012.

Altenberg, a pioneer of the farm-to-table movement in Chicago, passed away just months before the restaurant celebrated its 10th anniversary.

"Michael's influence is still seen in every aspect of our operations," Jon Altenberg, the chef's brother, told DNAinfo via email.

From the bistro's decor to its support of local farmers to popular menu items that Altenberg developed, "Michael's spirit lives on in our four walls," Jon said. 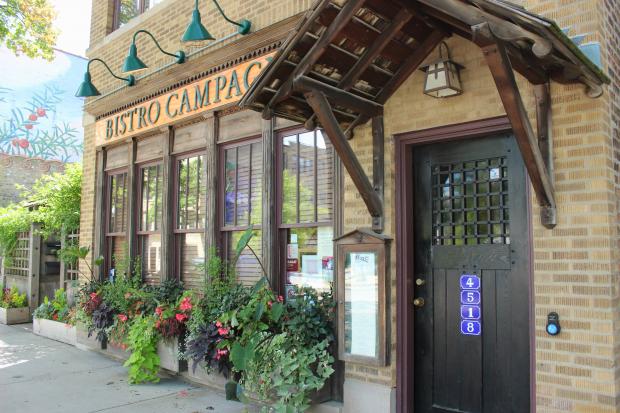 Bistro Campagne has been a fixture in Lincoln Square since 2002. The success of the restaurant is "intrinsically tied to the energy of this room and this patio," said general manager Todd Feinberg. [DNAinfo/Patty Wetli]

For the past four years, "What would Michael do?" has guided every decision made by members of the Altenberg family — who retain ownership of the restaurant — and general manager Todd Feinberg, who considered Altenberg his best friend.

As they steered their best guess of the course the chef would have followed, they decided: "Michael wouldn't want us to stay stagnant," Jon Altenberg said.

The result: Bistro Campagne will debut a new menu in August that is both distinct from Altenberg's, but remains true to his ethos.

Though the restaurant has made incremental changes since 2012, the new menu represents a more radical rethinking of bistro fare, as envisioned by newly named executive chef Luke Creagan.

"It's like how Michael would have run things, the 'future version,'" Creagan said.

Some of Altenberg's dishes are untouchable — the steak frites, for one, aren't going anywhere — and Creagan has taken pains to maintain the consistency of these holdover items.

"Chef Creagan made it his first mission to go back into the archives of Michael's recipes to assure that the true flavor of the food that he inspired lived on," Altenberg said.

Where the newcomer has brought the full force of his inventive playfulness to bear is in offerings like a sweet pea crème brûlée (which he swears tastes delicious) and frog legs served with blueberry lavender risotto.

"French new country" is what the restaurant has dubbed the cuisine — Creagan's twist on classic French bistro food.

That's heady talk coming from a guy who got his start flipping butter burgers at Culver's.

The Milwaukee-raised Creagan, 32, doesn't shy away from his experience at the fast food chain. Lots of teens take minimum-wage jobs during high school to earn money.

The difference, in Creagan's case, is that the gig sparked a passion for cooking and launched him on a unexpected career path.

"I learned that when it gets busy ... that rush? I loved it, the adrenaline," Creagan responded when asked what lessons from Culver's he carries with him today. "Some people would fall down. I thought, 'This is cool.'"

At the time, he had no intention of becoming a chef, but a SNAFU with his college acceptance packet derailed his plans to study sports medicine in South Carolina.

A flyer advertising the culinary program at The Art Institutes arrived in the mail at precisely the moment Creagan was at a loss for what to do with his future.

His world "changed on a dime," he said. "It was the best thing that ever happened to me."

After receiving his culinary degree, Creagan earned his bonafides at restaurants like Pops for Champagne and Logan Square's Michelin-starred Bonsoiree (now closed).

When he turned up earlier this year at Bistro Campagne and offered to man the kitchen's lowly salad station, Feinberg heard opportunity knocking.

"I knew his history," Feinberg said. "My wife and I still talk about one of our best meals at Bonsoiree."

Creagan's scallop s'more, which the chef called "the weirdest thing I've ever done," still stands out in Feinberg's memory.

"It was the craziest dish ever," Feinberg said. "You read it off the menu and you were scared."

The goal is not to frighten patrons at Bistro Campagne but rather to move the food forward to where French bistro cuisine is today, not where it was in 2002 or 2012.

"It's the more accessible French cuisine, but accessible doesn't mean rustic. It sill has to be refined and as house-made as possible," Creagan said.

"It's taking four or five ingredients that really balance together and having them dance on your palate," he said. 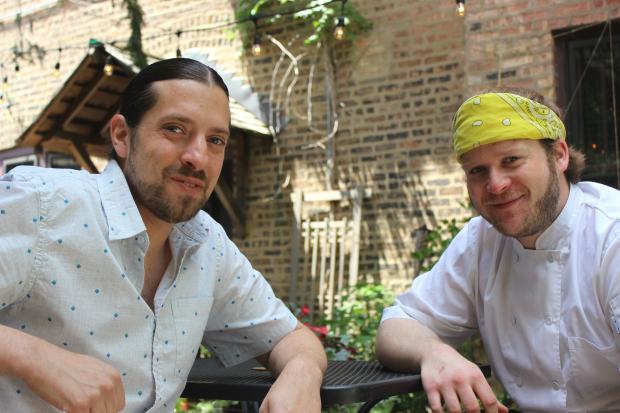 On certain nights of the week, Feinberg, who's managed Bistro Campagne since 2009, estimates he knows the names of 40 percent of the restaurant's diners.

Is he worried about alienating the bistro's most loyal patrons?

Quite the opposite, Feinberg said.

"A lot of our regulars want change. We're going to give them something more adventurous," said Feinberg.

It's a delicate balance, this business of honoring the bistro's roots while continuing to push culinary boundaries.

Jon Altenberg, for one, considers his brother's legacy secure with Creagan, whose sense of humor and "unpretentious nature" remind him of Michael.

"I truly believe that Michael would have found Luke to be a kindred spirit," Altenberg said. "Even his casual dress and the way he expresses his love for food are very similar to my brother's."

Creagan admitted to being "nervously excited" about the bistro's new menu and leading the restaurant's kitchen.

His task is made easier by the veteran staff who surround him.

Half of the restaurant's current employees worked under Altenberg — some of them since the bistro's opening — and they still tell stories about Michael, his brother said.

"When Michael passed, we all came together. Our instinct was not to close down," said Feinberg, who was about to partner with Altenberg on a new restaurant when the chef died.

At its heart, a "bistro" is defined less by whether its food is French enough or rustic enough but by the atmosphere it creates.

"It's a gathering place," Feinberg said. "We can have people come from a ballgame or on their anniversary. What a true bistro is ... it's a community."

The community that Altenberg founded at Bistro Campagne is still very much alive, from the dishwasher in the kitchen to the weekly customers who have a regular seat at the bar.

"I think Michael would have been very happy," Feinberg said.