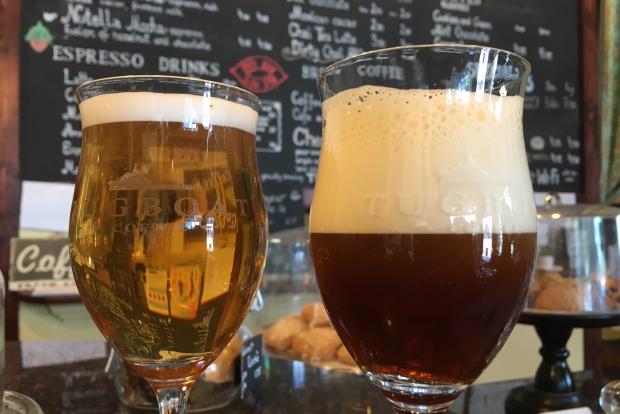 EDISON PARK — It’s getting easier to get your hands on a glass of so-called nitro coffee — cold-brewed coffee that’s infused with nitrogen and served cold out of a keg, just like Guinness.

Nitro tea, on the other hand, has been pretty much non-existent in Chicago until now.

The Cafe at LeFlour, a tiny corner cafe that shares a spot with LeFlour at 6701 N. Olmsted Ave., has been serving both for about two weeks now, and co-owner Kristen Polich said she isn’t aware of another shop in the city selling nitro tea.

Polich is offering one nitro tea option right now — masala chai — but Tugboat Coffee in west suburban Addison, which supplies her with nitro coffee and tea in kegs, is developing other flavors that the cafe will rotate on a weekly basis.

On tap for next week: a blend of peach punch and black tea.

“It’s like those orange dreamsicle popsicles, except it’s peach,” says Tugboat’s Erik Barkley, who uses teas from Chicago-based Benjamin Tea and The Tea House in Naperville. 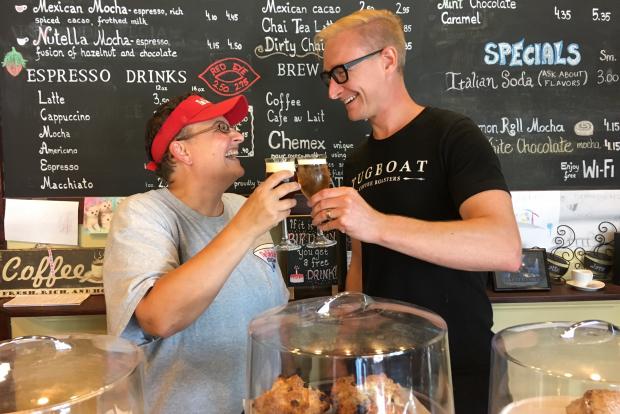 Right out of the tap, the amber-hued nitro chai could be mistaken for a light beer. It goes down like a cool chai latte.

Nitro coffee tastes silkier and sweeter than regular cold-brew, but there's nary a drop of dairy or sugar in it, either. As it separates into distinct layers of body and foam in the glass, it looks and even smells a little like a freshly poured Guinness.

“When I’ve posted photos on our Facebook in the morning, I’ll say, ‘Don’t worry, we’re not drinking beer this early,’ " said Polich, who took over the existing cafe last year with her business and life partner, Rachel O'Looney.

In Chicago, nitro coffee is on tap at Beatrix in River North, Goddess and the Baker in the Loop and Bow Truss Coffee Roasters, among other places.

By summer’s end, Starbucks has promised nitro coffee in more than 500 of its stores in seven cities, including Chicago. There isn’t yet an exact launch date for Chicago, a spokesman said. 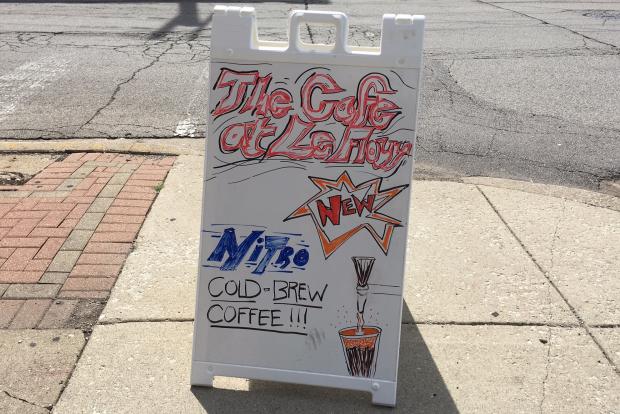 A sign outside The Cafe at LeFlour advertises its latest, trendiest offering. [DNAinfo/Janet Rausa Fuller]

Erik Barkley, the owner of Tugboat Roasters, said the nitro coffee and tea he produces for The Cafe at Le Flour are unlike any others in that they're not pasteurized or heat-treated in any way and don’t have preservatives, thanks to a unique filtration method he’s awaiting patent approval on.

After cold-brewing and filtering, the liquid is carbonated with nitrogen in a two-day process before being kegged, Barkley said.

Polich has been getting the word out about the new nitro offerings by social media and the old-fashioned way, on a handwritten board perched outside on the corner.

The tea is $3.95 and the coffee is $4.95. They come in 10-ounce cups; in tulip stemware, if you’re staying at the cafe. The flared edges of the glass are said to retain the carbonation better, Barkley said.

But that slight effervescence doesn’t last long, anyway — only a minute or so.

Polich said nitro coffee has been outselling the tea, and she’s noticed customers coming in just for it.

By mid-morning Monday, five hours after opening, she had sold nine nitro coffees. 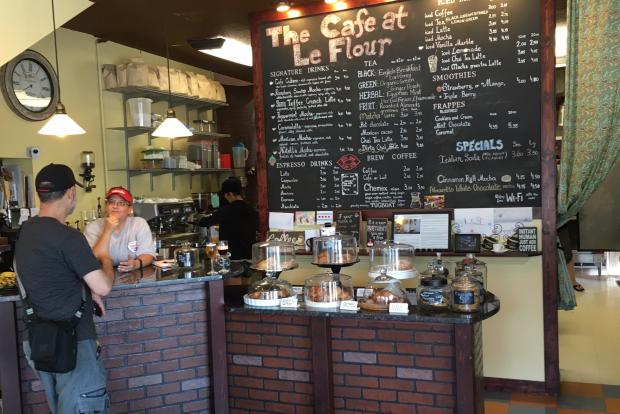 The Cafe at Le Flour, 6701 N. Olmsted Ave., is one of the few places in Chicago serving nitro coffee and tea. [DNAinfo/Janet Rausa Fuller]