MOUNT GREENWOOD — A ribbon cutting at Chicago Creampuffs & Cakes in Mount Greenwood Wednesday morning served as a precursor to a police-support event being called #ShowYourBlue.

Emma Dearth, the owner of the bake shop at 3458 W. 111th St., is inviting neighborhood families to make cards from 3-8 p.m. Thursday for the families of fallen police officers in Dallas and Baton Rouge.

"This is a police community, and what is going on is disturbing," said Dearth, who opened her business in December.

Donations will also be collected at #ShowYourBlue for the families of fallen officers, and Dearth is planning to make police-inspired sugar cookies. The proceeds from the cookies will be given to charity, said Dearth, a Mount Greenwood resident who hails from a large family, several of whom work for the Chicago Police Department.

Steve Coyne, of Mount Greenwood, will also be on hand to play the bagpipes at the card-making party. Coyne is an 18-year veteran of the Police Department and frequently supports police and other causes by participating in charity stair climbs.

Dearth said the idea for the card party came after a group of roughly 12-year-old Girl Scouts used her bake shop July 14 to make cards for the families of the five fallen officers who were gunned down July 7 in Dallas.

Among the heartfelt messages in cards was a plea framed with pink hearts that read, "Police need to be heard. Not hurt." 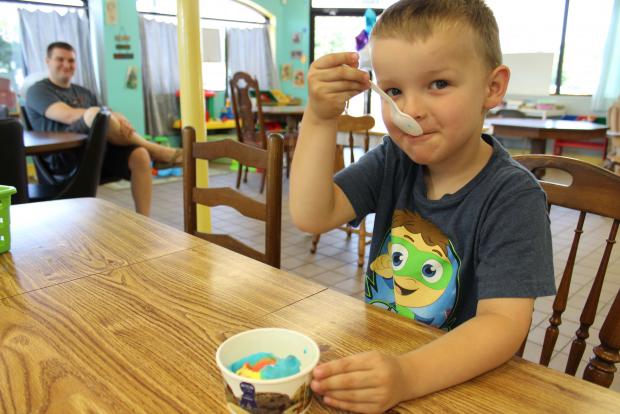 Aside from the upcoming event, Dearth said she always wanted to host a ribbon-cutting ceremony with the Mount Greenwood Chamber of Commerce, but she held off until her business was more established in its new location, moving from its former spot at 2734 W. 111th St. in Morgan Park.

Indeed, the business added ice cream to its menu last month, has been selling deli sandwiches since March and began offering soups in January. The interior has also come together. The bake shop now has a cozy feel with an array of mismatched chairs and tables, along with books and toys for children.

"I want it to look like grandma's kitchen," Dearth said. "We have a lot of moms come in and sit down with kids." 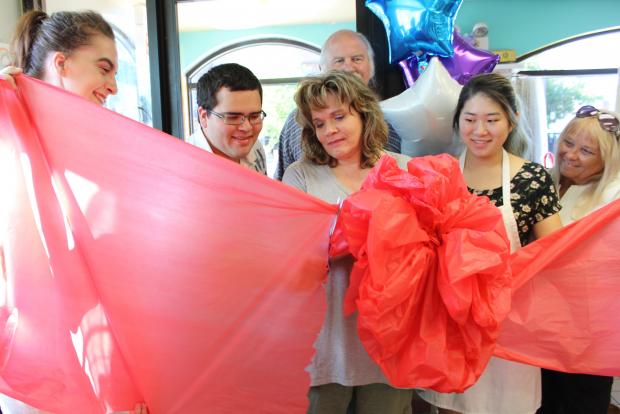 Matthew Dearth cuts a ribbon held by his mother, Emma, Wednesday at Chicago Creampuffs & Cakes. The ribbon-cutting event served as a precursor to the #ShowYourBlue card-making party that's set for 3-8 p.m. Thursday at the bake shop in Mount Greenwood. [DNAinfo/Howard A. Ludwig]