'I Don’t Plan To Fail At This:' Pullman Teen Designs Her Own Clothing Line

PULLMAN — Instead of laying on the beach or attending concerts all summer, 17-year-old Lala Hale spends long hours in her design studio, aka her living room.

The Pullman teen is working on her summer collection for “Rich Temper,” a women’s clothing line she launched two years ago. It debuts July 25. She also creates custom items such as jackets, skirts, dresses and more for women ages 15-55. Her summer collection will consist of rompers, tank tops and swimsuits.

“Rich Temper is all about women just feeling unique,” she said. “They won’t have any pieces that look like anyone else's. I want the customer to feel special and I also have this slogan you don’t have to be rich to look and feel rich.”

Her inspiration these days comes from singer Rihanna and actress Zendaya, whose style Lala has pegged as street-chic.

Like most millennials, Lala said YouTube is the instructor and the bedroom is the classroom. Lala said she thinks of herself as self-taught and has acquired most of her skills from the internet.

“I would say about 80 percent of what I use now was learned off of YouTube and Wiki How,” she said. “I’ll go on YouTube and look for certain stitch techniques.” 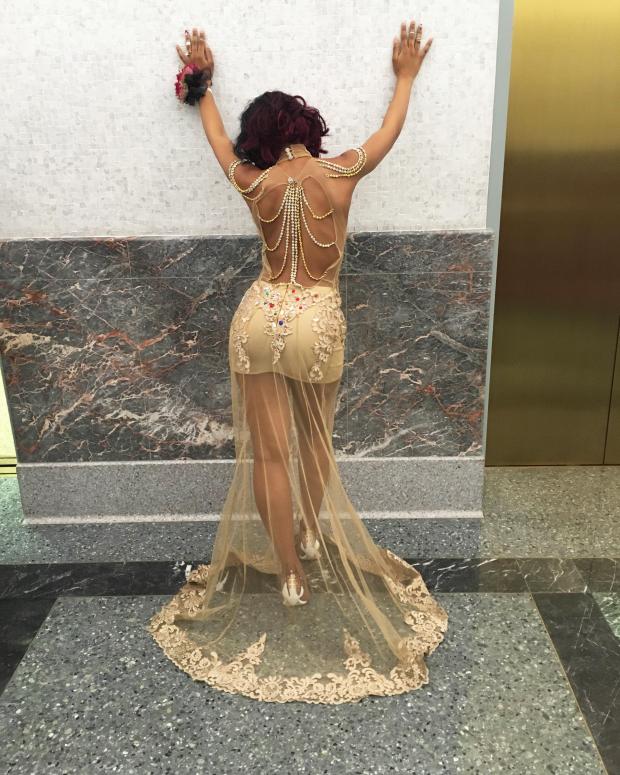 Her passion for fashion was ignited as early as fourth grade when a classmate brought Barbie clothing stencils to school, she said.

The students grabbed the sheets full of sewing patterns so she was left to design her own. It wasn’t until sixth grade that she took her first sewing class, though, and learned how to make simple things like pillows. The foundation was laid and her natural talent took over.

She convinced her mother to buy her a sewing machine so she could practice outside of school. Now she has four.

“It’s something I stuck with because it’s my passion,” Lala said. “I’m not athletic, I can’t dance or sing so this is really my passion and my only plan. I don’t have a backup because I don’t plan to fail at this.”

Seeing her friends go out while she’s working is difficult at times, she said, but she fights the temptation.

“From the time I roll off the bed, I roll into my design studio so I’m not as flexible as them,” Lala said, adding that she sometimes feels like she’s missing out.

“I often say I sold my childhood but it’s not like a regretful type of thing, it’s like I know what I’m doing and I don’t do it for anyone else or because I’m told to do it,” she said.

Her mother, Lakiya Hayes, said no one else in the family is creative and that she noticed Lala’s budding talent when she was 11.

“She made all my pillowcases and she made me a gym bag in seventh grade,” she said. “Lala then started making dresses, skirts and evening gowns.”

Hayes said she’s proud of her daughter and has always taught her to stay true to herself.

After years of practice, Lala said her work has drastically improved and speaks for itself. There's a flat rate for smaller items so pencil skirts start at $65 and shirts at $45. Custom dresses and jackets include the cost of labor plus materials, so those items start at $100.

She makes frequent visits to New York City for her fabrics, and also travels with her pop-up shops and has been in a handful of local fashion shows.

Her pieces demonstrate raw unleashed creativity with swag and just the right amount of femininity.

Lala is heading off to Savannah College of Art and Design in Atlanta campus this fall where she will study fashion marketing and management.

She said her next goal is to get an online boutique started while she’s away because she won’t have the space in her college room to create the way she can at home. Eventually she said she wants to have her pieces massed produced and in department stores. She would still like to see her boutique in different cities too.

Lala is also a big believer in giving back and supporting teen entrepreneurs. She said she is always open for shadowing days and loves giving advice. One of her tips for aspiring “teenpreneurs,” as she calls them, is to start pursuing their dreams now and not wait until they're adults.

“You can go find internships, you can make a business plan now, you can start now,” she said. “I don’t want to work for the big man, I am the big man.”