E. Coli And I: How My Favorite Local Mexican Place Poisoned Me

BRIDGEPORT — I decided to end what had been a pretty good day on an even higher note.

After a few hours at the Montrose dog beach on June 25, I decided I would pick up some Mexican food on the way back to the South Side. I didn't even have to think about where I would go: For Mexican fare, my choice was always Carbón.

Living less than a mile from the place, Carbón, 300 W. 26th St., was a staple of my diet. In a neighborhood best known for its fast Italian restaurants, I genuinely believe Carbón offers the best food in the area.

But this time, I got a little bit more than I asked for with my tacos, chips and guacamole: a nasty case of E. coli poisoning. Now I'm left fighting the remaining effects of the painful infection, all the while grappling with whether I can ever trust my favorite restaurant again and how to cover a huge pile of medical bills.

That day ended just I had planned — with a satisfying meal after an eventful afternoon. But the next week went horribly, painfully awry.

I woke up about 4 a.m. two days later with a strange stomach pain and decided immediately that I needed to rush to the bathroom, where I began throwing up.

I got through Monday and Tuesday last week, although I was a bit nervous I would get sick while at the work softball league (Go team DNA!). Wednesday is when things turned significantly for the worse.

All of a sudden, I was overcome with an intense abdominal pain that came in wave after excruciating wave. It felt as if my intestines were being squeezed by a large python constricting its prey to death. I swore I could see my intestines pulsating through my stomach.

(I will spare you the very gory details of what E. coli does to one's body but will say it involves the loss of a lot of ... fluids.)

I stopped being able to sleep and would wake up at least once an hour with unbearable pain.

On Thursday, I went to the emergency room. Doctors thought it was maybe the stomach flu or a complication of previous diagnosed conditions, and they discharged me with some drugs for pain relief. They didn't work and I was back in the E.R. on Friday.

Doctors at the South Side hospital I visited could not figure out the cause. At one point they considered removing my appendix and for a brief moment thought I had dysentery. My doctors said there had been a small outbreak in the area, about five cases.

It wasn't until my girlfriend saw news reports of Carbón having tested positive for E. coli and that at least 25 people were sickened that we got some answers.

That was Friday evening, after spending about 14 hours in the hospital. The hospital had received notification of the outbreak from the Chicago Department of Public Health earlier than the public did, but was still unable to properly diagnose me until we suggested it test for E. coli. This will forever be my textbook example of why journalism still matters.

I was finally tested for E. coli. I knew my diagnosis was not good after the doctor came into my room wearing a face guard, goggles, gloves and a thin, plastic outer layer of protection over her lab coat and scrubs. 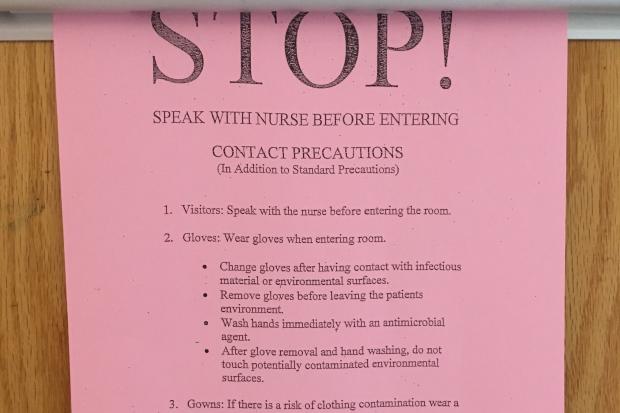 You'd want to think twice about visiting me. [DNAinfo/Joe Ward]

Sure enough, tests confirmed that I had contracted the very infectious, specific strain of E. coli that produces the harshest abdominal pains.

A Chicago Department of Public Health investigation showed the E. coli outbreak began at Carbón, but it’s unknown if the illness-sparking bacteria began with a particular food item or a sick employee. Carbón representatives could not be reached Tuesday, and both its Bridgeport and West Town spots remained closed Tuesday.

As it turns out, there is no real cure for E. coli, other than your body's natural immune system. Antibiotics would help rid my body of the toxins, but would cause a tremendous amount of pain in the process, doctors told me.

So I had to wait. Which is exactly what I did all Fourth of July weekend. As of Tuesday, I was still a little apprehensive about going out in public, fearing my system had not totally recovered.

Really, I'll know I'm better again when I feel like eating some Mexican food. Then I will have a really interesting choice to make: Carbón or not?