After 25 Years, Uncommon Ground Is Still Low-Key And Keeping It Local 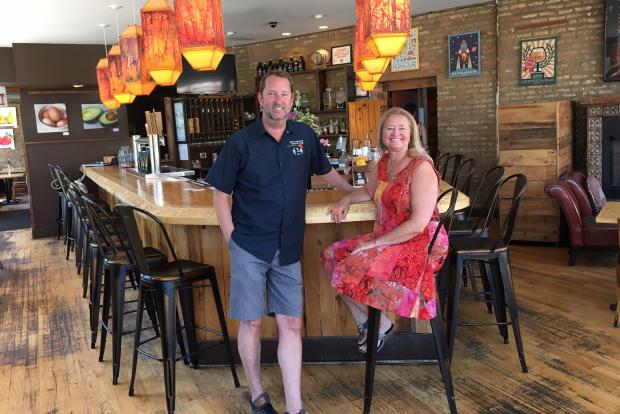 WRIGLEYVILLE — The roots of a pioneering restaurant in the slow food movement were set down 25 years ago over an uncharacteristic lunch of Subway sandwiches.

Helen and Michael Cameron, both 28 at the time, had left their jobs at a Streeterville hotel, she as executive chef, he as food and beverage director, to open an espresso bar — literally a cart in The Century mall in Lakeview — with plans for something more permanent. Nothing big or fancy, just permanent.

They found it, they thought, on the southwest corner of Broadway and Roscoe, and they put down the money needed to secure the property.

“But then the owner wouldn’t return our calls and our deposit check came back to us. We found out Starbucks took our space right from under us,” Helen Cameron said.

Crestfallen and not exactly swimming in disposable income, the couple continued their search.

“I had this coupon for Subway, a two-for-one sandwich thing. So we were out looking and we go to the Subway at Grace and Clark, and we see this little storefront for rent. The windows were boarded up. So while I was getting my sandwich, Mike got the name of the landlord.

“As soon as I walked into the space — I have this imagination and I tend to think in pictures — I immediately could picture all the fun activity that could go on there,” she said.

In 1991, with a loan from relatives and a lot of elbow grease, the couple opened Uncommon Ground at 1214 W. Grace St., within walking distance of their apartment. They filled the 24-seat coffeehouse with reclaimed furniture and cooked from a makeshift kitchen (toaster, microwave, four-burner home-model stove).

Inch by square inch, like the plants that fill its sidewalk boxes every summer, it has grown into the community-focused, music-infused sustainable hub — make that two hubs — that they pictured from the start.

In 2007, the Camerons opened a second restaurant in Edgewater at 1401 W. Devon Ave. as a showcase for a first-of-its-kind rooftop farm. In 2014, they added Greenstar Brewing at the Wrigleyville restaurant, the state’s first certified organic brewery.

They own the building on that northwest corner of Clark and Grace and are using all but one commercial space there, with plans to expand the brewery into it.

On Friday, which marks Uncommon Ground's 25th anniversary, all diners will get 25 percent off their bill. Both locations also will offer a $25 prix fixe menu throughout July.

“'Nourish community and nurture nature.' We really try to put everything we do through that special filter,” Helen Cameron said. 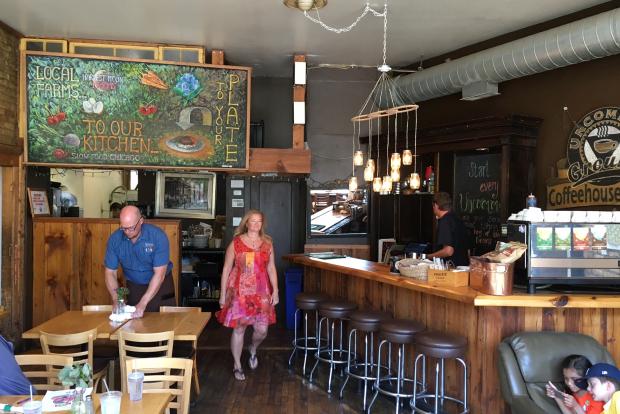 The storefront at 1214 W. Grace is now a second dining room; the original sign hangs on the right above the bar. [DNAinfo/Janet Rausa Fuller]

Uncommon Ground was ahead of its time, a smoke-free coffeehouse in the 1990s grunge era when, if you weren’t chain-smoking over your latte, you were doing it wrong.

It hosted openings for emerging local artists and hung their art on the walls. Musicians both famous and vaguely familiar came and strummed in front of the cafe’s pastry case.

Most memorable among them: the late singer Jeff Buckley, who performed there on what Cameron calls a “very magical” snowy February night in 1994, three years before his drowning death.

It was the 27-year-old’s first time playing in Chicago. The Camerons set pillows atop milk crates as extra seating for those who’d crammed in to listen. They sipped hot chocolate, and when Buckley started to play, “you could hear a pin drop. All the hair was standing up on your arms,” Cameron said.

“Afterward, we ended up having great, big snowball fight,” she said — Buckley, too.

Before restaurant menus listed the provenance of the basil in your Caprese salad and the name of the farmer whose hens laid the eggs for your frittata, Cameron was bringing back bushels of stone fruits and vegetables from farms near her parents’ home on the Indiana-Michigan border to use at Uncommon Ground.

She’d grown up that way, eating what her family grew. She tried shopping at the wholesale produce markets and farmers markets downtown, but found that none of what was sold was locally grown.

“I was utterly disappointed,” she said.

She also was motivated to find purveyors who weren’t using hormones in their dairy and meat. The opening of Green City Market in 1998 was a turning point that made it easier for her to buy what she wanted to cook and fostered the public's awareness and investment in organic and sustainable food. 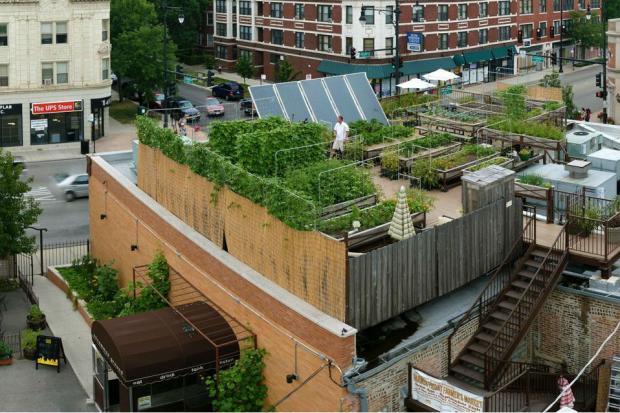 The organic rooftop farm at Uncommon Ground on Devon Avenue was the first of its kind in 2008. [Zoran Orlic Photography]

Time for a second

The Camerons took over an adjacent storefront on Grace in 1996 and the corner spot in 2005, each time doubling their capacity and sales. After being featured on WTTW’s “Check, Please!” restaurant review show in 2006, Cameron said there was a line of people the next morning waiting to get in.

“That’s when we started thinking about opening another restaurant,” she said.

The couple toured the building on Devon in February 2007. Mike held the ladder as Helen climbed it to check out the roof. When she got to the top, “I realized, ‘Oh my God, we could grow food up here,’ “ she said.

They opened the second restaurant in December 2007. By the following year, the 800-square-foot farm, complete with beehives, was producing and had earned organic certification from the Midwest Organic Services Association, the first rooftop farm in the nation to do so.

Re-certification is required every year and involves a rigorous inspection, down to the seed packets used. 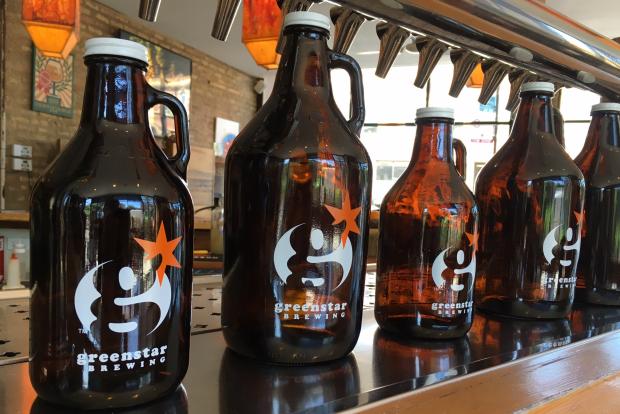 “As time went on, the same thing has happened for items like vodka and gin,” Cameron said, ticking off the names of local distilleries, Koval and Few Spirits among them, whose bottles sit on the bar.

“Ultimately, we don’t want to import anything if we can find something local or organic,” she said.

Brewing their own beer seemed the next natural step. Greenstar beers are as seasonal and close to home as what’s on the food menu. The restaurant’s coriander and black currants flavor its summer witbier and kolsch. Even some of the hops come from the roof. They buy the rest, plus yeast and grain, from Midwest and Chicago purveyors, said Martin Coad, Greenstar’s brewmaster and beer ambassador.

Two full-time farm directors manage the green spaces at both locations. While they yield only about 3 percent of the produce the restaurants use annually, every bit goes to the kitchen. The rest comes from area farms.

Liam Ford, a Chicago Tribune reporter and amateur beekeeper who met the Camerons through a mutual friend years ago and lives a few blocks from the Edgewater location, tends the beehive. (There’s only one this year; the other was lost after the bees swarmed.) 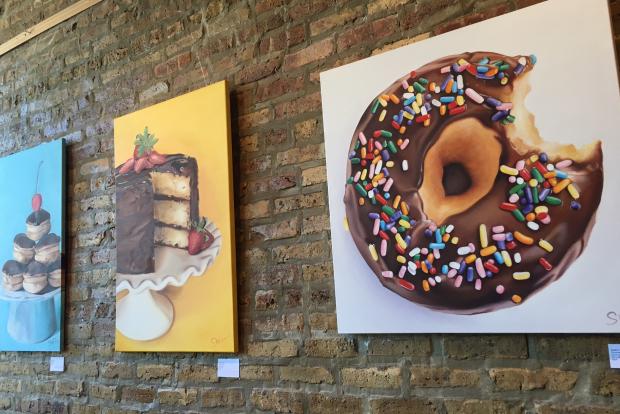 Music and art remain an integral part of the operation. There’s live music nightly, an open mic night once a week at each location and a Jeff Buckley tribute concert every Nov. 17, the singer's birthday. Musicians from as far away as Australia have come to perform. This will be the 18th year of the Buckley concert series.

The memories run especially deep for Michael Cameron, who booked the music for 17 years before hiring a music director. David Gray, Gavin DeGraw, Susanna Hoffs — they all have played at Uncommon Ground.

The band Train played before a private audience of Sony executives and signed a record deal afterward, Cameron said.

“She ended up getting married here. People magazine bought the photo rights, so we had to paper over all the windows so people couldn’t take pictures outside,” he said.

Most days, the Camerons, both now 53, shuttle between the restaurants, rarely at the same time.

For Helen Cameron, watching customers’ reactions when they tour the Devon farm for the first time is gratifying.

“It’s turned into this really great connector,” she said. “I think a lot of times people take their food for granted, and they don’t stop and think about what it takes for something to get to their plate. We had three events at Devon yesterday. It’s always fun to see people turn the corner and say, ‘Wow.’"

Last week, the Camerons noticed something different on the corner across from the Wrigleyville location. The Subway sandwich shop, which Helen Cameron ate at exactly once in the last 25 years, had closed. 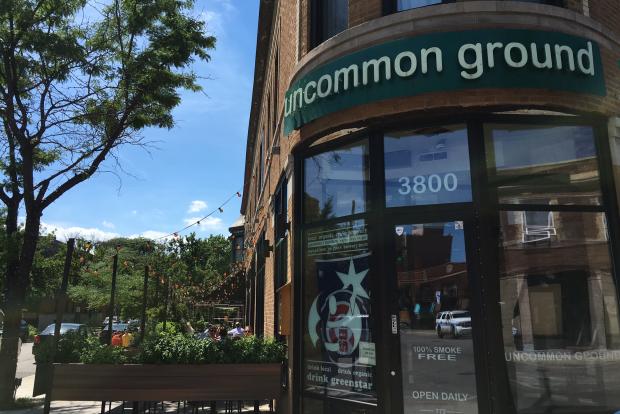 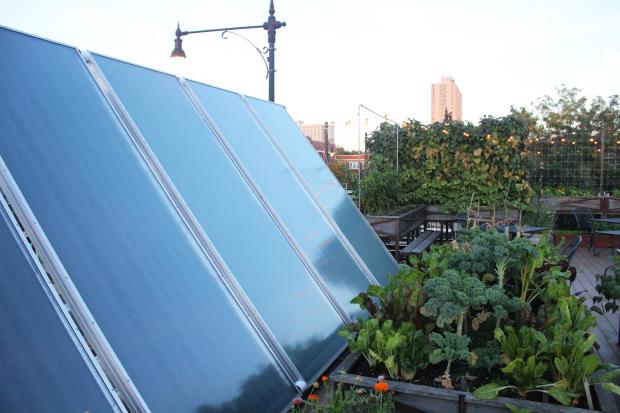 Greens grow next to solar thermal panels on the roof of the Devon Avenue restaurant. [DNAinfo/Benjamin Woodard]