The First Taste Of Chicago Was On The Magnificent Mile ... And Packed

Thirty-six years later, only one of them is still in business and still a participant at the annual festival. And after all those years, it's probably the most recognizable one: Eli’s Cheesecake.

“It’s one of those things where you just don’t want to miss it,” said Eli’s president Marc Schulman, son of the founder Eli Schulman.

Eight of the other original Taste vendors are still operating today in some form or another: Aunt Diana’s Old Fashioned Fudge, Fireplace Inn, Gaylord India, Guey Lon, Lawry’s The Prime Rib, Leon’s BBQ, Nancy’s Pizza and the Pump Room. Another three were regional or national businesses — Wendy’s, Yoplait and Wisconsin Cheese — but are no longer at the fest.

But you won’t find any of them at this year’s Taste, which runs July 6-10 in Grant Park.

Aunt Diana’s, purveyor of chocolate-dipped strawberries and frozen bananas that for years were as ubiquitous as those giant turkey legs, has been absent from the Taste since 2010. That’s the year the city said only businesses located within city limits could participate. Aunt Diana’s is in west suburban Riverside.

Guey Lon, which has been open at 3968 N. Elston Ave. since 1947, dropped out after the summer of 2011; Leon’s did so a mere five years into it. The owners of both restaurants said at the time of their respective exits that it wasn’t worth the effort. They sold food all right, but didn’t make a profit.

Another longtime Taste vendor, the famed Billy Goat Tavern, didn’t have a booth that first year, according to John Sianis, the son of founder Sam Sianis.

Sianis says his dad figured because the fest was taking place on the street directly above the subterranean restaurant, Taste revelers would just come down to them — which they did.

A Chicago Tribune article dated July 7, 1980, describing the overflow crowd at the Taste, said, "A few clever visitors took refuge at the Billy Goat Tavern on lower Michigan Avenue, where the lines were short, and where grill man Sam Sianis was in his glory shouting out his 'chizburger, chizburger' line (made famous by 'Saturday Night Live') for all the tourists."

Eli's wasn't yet a cheesecake company back in 1980. It was Eli’s The Place For Steak, the Streeterville restaurant favored by celebrities and politicians that entrepreneur Eli Schulman opened in 1966.

In the late 1970s, Schulman developed the recipe for what would become the restaurant's signature dessert: a creamier-than-average cheesecake with a cookie, not graham-cracker, crust. 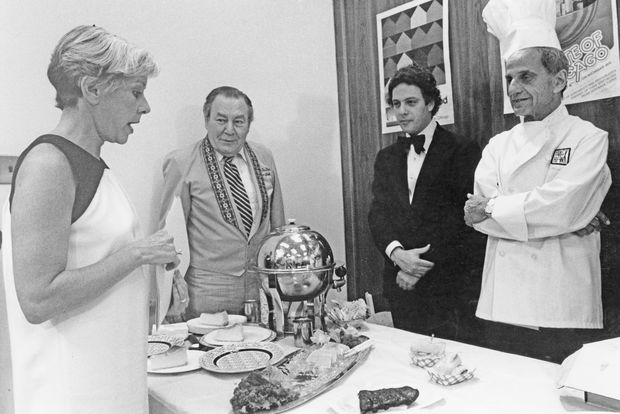 The inaugural Taste, conceived by the late restaurateur Arnie Morton and blessed by then-Mayor Jane Byrne, was Schulman’s first opportunity to sell the product outside of Eli's, said his son, who at the time was a newlywed and law school graduate.

“We didn’t really know what to expect,” Marc Schulman said.

Food tickets were 50 cents each, sold in strips of five. There were three kinds of cheesecake at the Eli’s booth. A slice was three tickets.

Eli Schulman, in a suit and tie, cut the dessert by hand behind the booth, assisted by his son and new daughter-in-law. (Machines do the work in advance now, Marc Schulman said.)

By 3 p.m., restaurants were nearly sold out of food. At 5 p.m., Jimmy Damon took the stage to perform.

The next year, Mayor Byrne moved the event to Grant Park, where there was much more room to eat and roam, roam and eat. 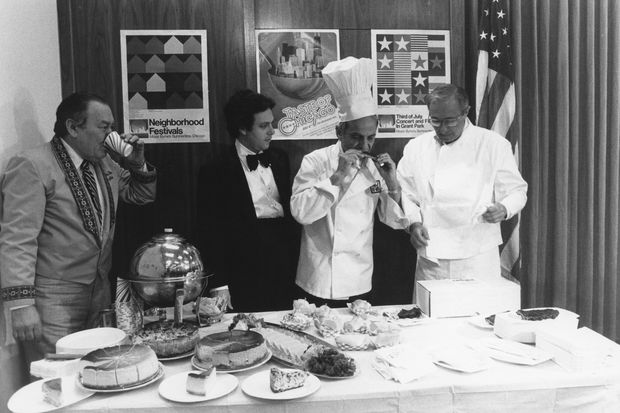 Restaurateurs Eli Schulman (from l.), Rich Melman, Don Roth and Arnie Morton at a preview for the first Taste of Chicago in 1980 [Eli's Cheesecake]

Festgoers this year will have 69 options from which to choose: 34 restaurants and 18 food trucks serving food daily, and 17 pop-up restaurants doing one- or two-day stints.

Eli’s long-standing Taste tradition of cutting and serving a giant cheesecake — which weighs in at 1,000 pounds — takes place at 12:30 p.m. July 9 at Buckingham Fountain.

At the Eli’s booth, the offerings will include plain cheesecake with strawberries; turtle cheesecake; small “Taste” portions of key lime and plain cheesecake; chocolate chip cheesecake on a stick, called a Crunch Dipper; and the Cheesecake Smoosh, which Schulman describes as “cheesecake and ice cream mushed together with chocolate sauce.”

That last item isn’t a novelty. His dad used to serve it at the restaurant. 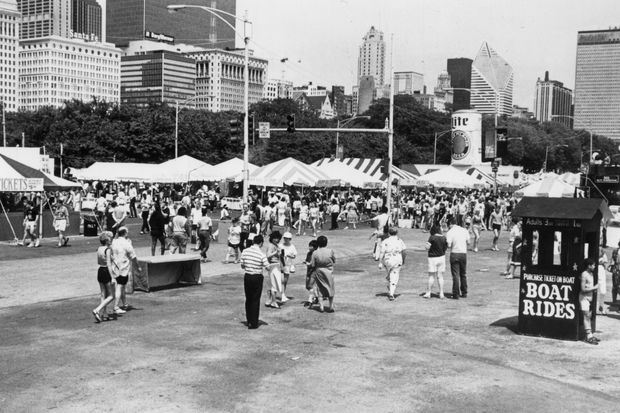 The city moved the Taste of Chicago to Grant Park from Michigan Avenue in 1981. [Chicago History Museum]