RAVENSWOOD MANOR — One of the biggest stumbling blocks to a continuous bike path along the Chicago River has been the lack of public riverfront access between Montrose and Lawrence avenues.

In collaboration with Ald. Deb Mell (33rd) and residents of Ravenswood Manor, the Chicago Department of Transportation has come up with a way to fill this gap.

The Neighborhood Greenway Project, unveiled at a packed community meeting Wednesday night, would use Manor Avenue to connect Horner Park on the south and Ronan Park on the north. 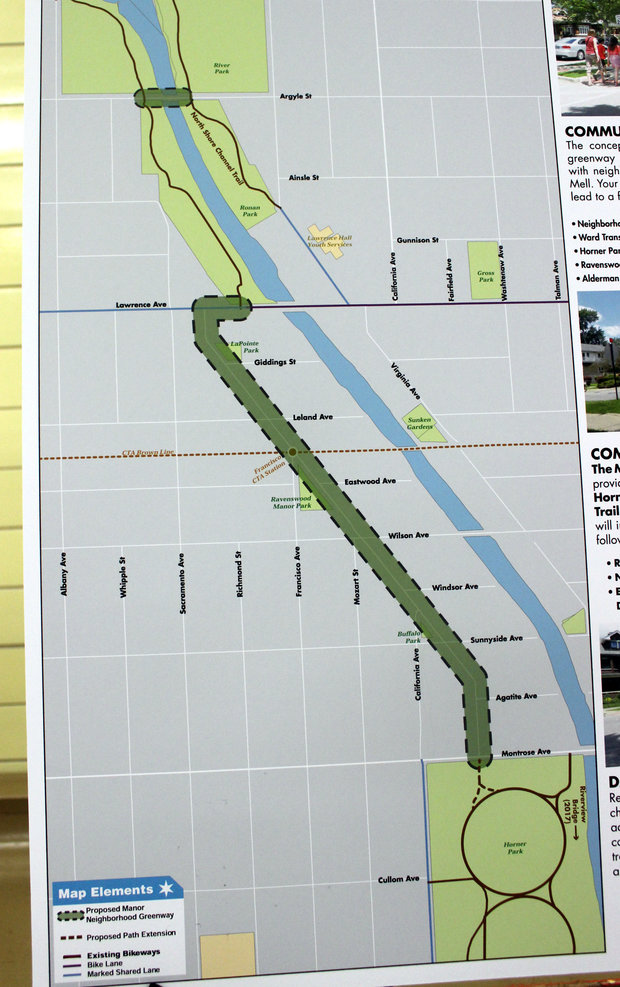 The greenway would link existing paths to the north and south of Ravenswood Manor. [All photos by DNAinfo/Patty Wetli]

Mike Amsden, assistant director of transportation planning with the department, laid out specifics of the plan, which is still in an initial phase of development. The department aims to finalize the greenway's design by the end of this year.

"There's a lot of tweaking that will happen," Amsden said.

At the earliest, the new greenway would be installed in summer 2017, he said.

Components of the greenway include:

• Raised crosswalks at Manor and Lawrence, and Manor and Montrose. 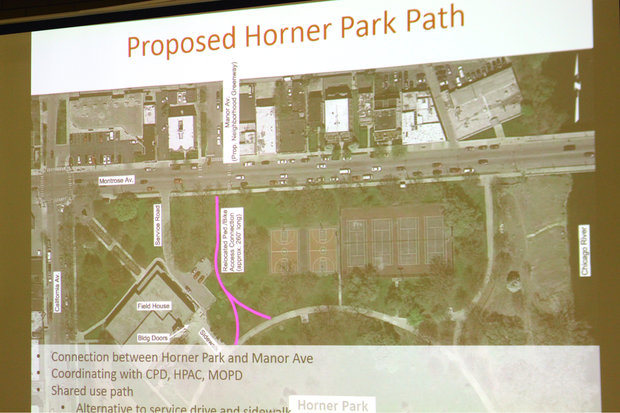 A proposed spur path in Horner Park is illustrated in pink.

The crosswalks would be at the same height as the sidewalk, not the street providing a physical and mental signal to motorists to slow down as they enter the greenway.

• A new path spur in Horner Park would align with Manor Avenue at Montrose.

A refuge island would be created at Montrose and Manor to allow safer crossings for pedestrians and cyclists. 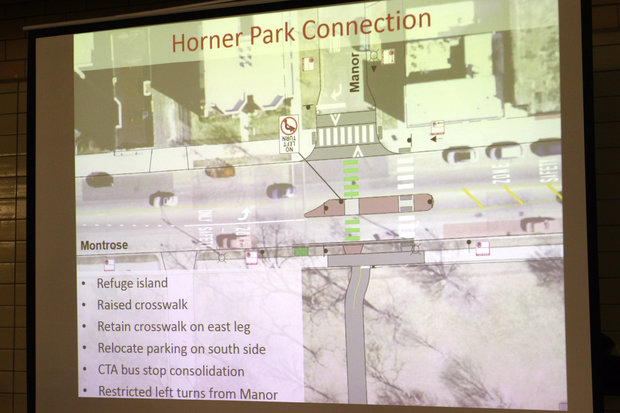 The greenway connection to Horner Park.

• To connect the greenway to Ronan Park, a new shared-use path would be created in the parkway on the south side of Lawrence Avenue, east of Manor.

A refuge island would be created on Lawrence to ease crossings into and out of Ronan Park. 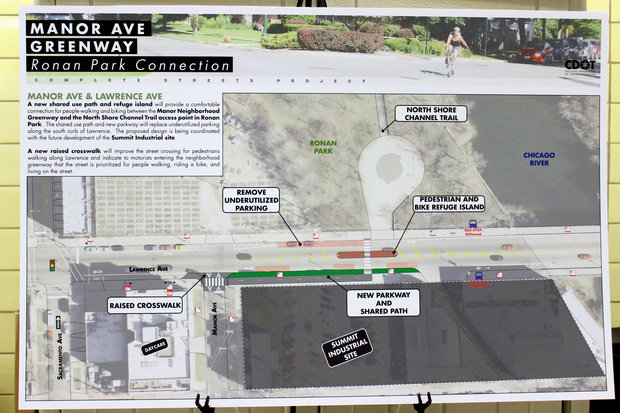 The greenway connection to Ronan Park.

• Shared lane bike markings would be painted on Manor and additional 20 mph speed limit signs would be posted.

No parking spaces would be lost due to the greenway, Amsden emphasized.

The project would be funded through federal dollars and $70,000 in aldermanic infrastructure money, Mell said.

The greenway builds on previously-announced projects that extend the riverfront bike path from Belmont Avenue to Horner Park, including the Riverview Bridge, which will soar above the Chicago River as it connects Clark Park to California Park; and an underbridge at Irving Park Road that will link California Park and Horner Park.