Debate Over 'Cut-Through' Traffic Raises Question: Whose Streets Are These?

RAVENSWOOD MANOR — A controversial plan to reduce cut-through traffic in Ravenswood Manor by diverting cars away from the neighborhood was met with mixed reaction when presented at a community meeting earlier this week.

Manor residents have complained for years that motorists use the sleepy enclave as a speedier alternative to Lawrence, Montrose and Kedzie avenues. These cut-through drivers create a hazard, neighbors said, for the adults and children who live, walk, bike and play in this heavily residential area.

The 33rd Ward's Transportation Action Committee, formed by Ald. Deb Mell after she took office in 2013, enlisted the Chicago Department of Transportation to help devise ways to slow down and reduce the amount of non-local traffic in the area.

The department's solution, unveiled at the community forum, includes a neighborhood greenway on Manor Avenue, which would prioritize pedestrians and cyclists over cars, implementing a number of "traffic calming" measures.

While the greenway — which would also link bike paths in Horner and Ronan parks — earned near unanimous support from the community, a separate traffic reduction measure sparked an hour-long debate, something Mell had anticipated at the meeting's outset.

The idea at the center of the dispute: During a test period between August and October, all automobile traffic on Manor Avenue would be diverted east or west at the street's juncture with Wilson Avenue. Barricades would be place in way of oncoming cars, though pedestrians and cyclists would be allowed to proceed through as normal. 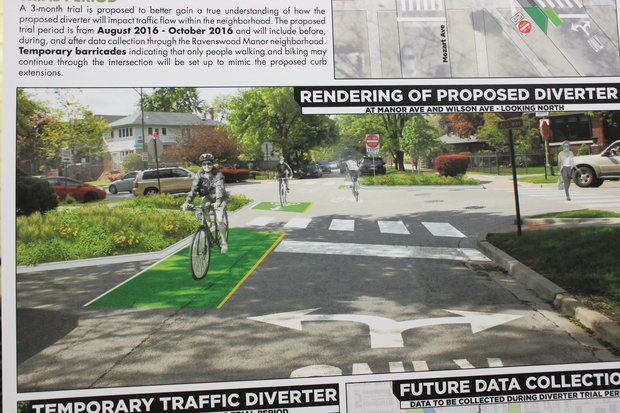 A rendering of the proposed diversion. [All photos DNAinfo/Patty Wetli]

Manor Avenue was chosen for the experiment because traffic counts showed the street bears a disproportionate share of cars cutting through the neighborhood, carrying two to three times the number of vehicles as adjacent streets, according to Mike Amsden, assistant director of transportation planning with the transportation department.

Cars would still be allowed on Manor Avenue and two-way traffic would be maintained. But anyone attempting to travel north-south through Ravenswood Manor from one end to other (Montrose to Lawrence, or vice versa) — including residents — would find their route stymied at Wilson. 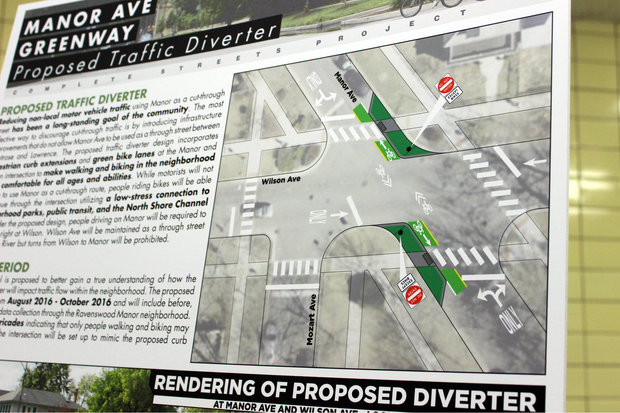 During a test period between August and October, all automobile traffic on Manor Avenue would be diverted east or west at the street's juncture with Wilson Avenue.

Manor "will be a much more comfortable street for people biking and walking," Amsden said.

A worst-case scenario presented by Amsden showed that the diversion at Wilson would reduce traffic on Manor by 30 to 55 percent, but would conversely dump hundreds of additional cars onto Francisco and Sacramento.

"The notion would be to balance traffic among more streets instead of Manor bearing the majority," he said.

Neighbors saw it differently, comparing the effect to a game of "whack-a-mole" — reducing traffic on one street only to have it pop up on another.

"Francisco will become the new Manor," one resident said.

Others labeled the plan a "disaster" for Wilson Avenue, which has become such a notorious route for speeders that Cmdr. Elias Voulgaris of the Albany Park Police District has been persuaded to conduct a number of traffic stings.

"Can we just have signs that say 'Local traffic only?'" one neighbor suggested.

"All traffic is cut-through" unless you're on the street right in front of your house, said Jacob Peters, a member of the Transportation Action Committee.

Peters said he was on board with the diversion solely as a test.

"I don't believe you can divert people from going places," he said. "We need to find out what is the real problem, then we can address things."

Tim O'Brien is one of the non-local drivers who would be pushed to an alternate route.

"It sets my teeth on edge. The 'cut-through' thing, it's like I don't belong," O'Brien said. "It's a city street. We have a right to drive on that street."

Throughout the pilot period, the city would conduct traffic counts throughout the neighborhood and even as far east as Rockwell Street to assess how drivers are altering their habits, Amsden said.

"If we're a month and a half in and it's abysmal, we'll move" the barricades, Mell said.

Her office has set up an email address specifically to collect feedback on the idea and the trial diversion once it's in place: manorgreenway@gmail.com. 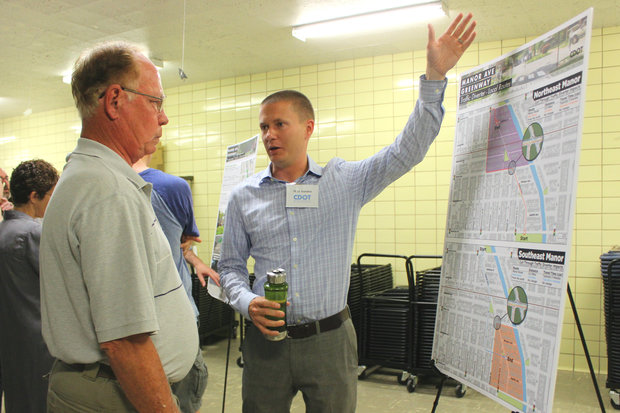 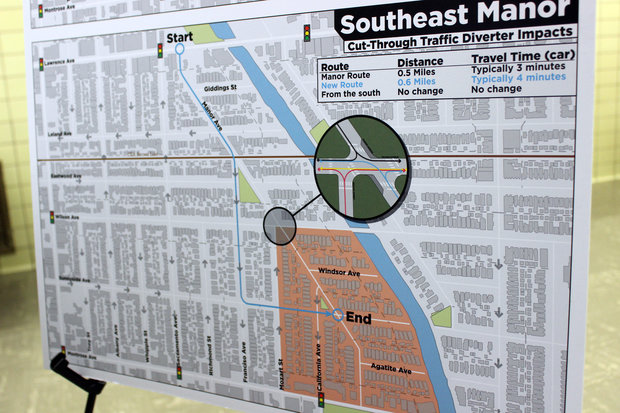 Even Ravenswood Manor residents would have to find an alternate route to their own homes. Proposed traffic reroute south of Wilson for Manor residents. 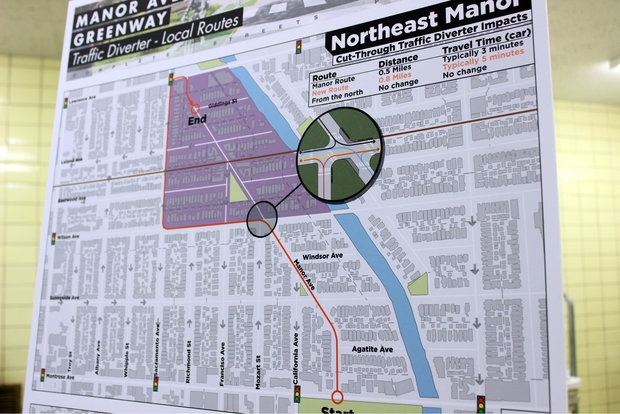