Alleys Transformed Into Main Streets — Could It Happen?

LINCOLN SQUARE — A pair of architects have seen the future of infrastructure in Chicago and it already exists.

Not necessarily legally, but it exists.

Picture alleys and garages not as conduits for automobiles — and garbage trucks — but occupied by artist studios and workshops, serving as centers for community meetings and acting as incubators for small businesses.

Lui and Reschke, partners in Bridgeport-based Future Firm (and in life), started thinking about garages when they were asked to renovate their dog trainer's — who was using hers to run puppy classes.

Patty Wetli talks about the idea of transforming Chicago's Alleys.

"It's already happening" on a quasi-illegal basis, Lui said of the Rebel Garages concept.

She pointed to Future Firm's home base, where a mini-sharing economy has cropped up among neighbors who live and work out of their houses and apartments, from the costume designers down the street to the sculptor next door.

"It's a very, very old model of how to live and work," Lui said. "Let's recognize this is a thing and think about it more explicitly." 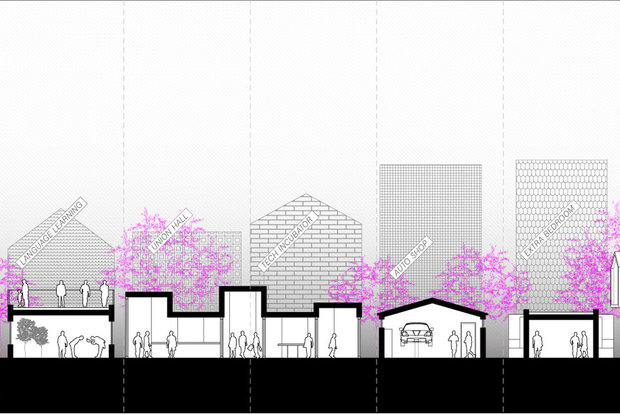 With predictions pointing to less need for parking in the coming decades, Lui and Reschke are suggesting a few simple changes to Chicago's building and zoning codes that would pave the way for more flexible uses of garages and alleys.

For starters, the existing code, which refers to garages as "accessory" buildings, places height limits at 15 feet.

"Think about coach houses — you can't do that anymore," Reschke said.

In the 47th Ward — which Lui and Reschke chose for the "50/50/50" exhibit — building up along alleys could compensate for the density being lost as two-flats are converted into single family homes, he said.

New plumbing is also banned in garages, prohibiting things like sinks and toilets that would be essential to development.

"In some parts of the city, zoning isn't contributing to transformation," Lui said.

Though allowing for taller garages and new plumbing sound like simple tweaks to the building code, the implications are nothing short of radical, Lui and Reschke acknowledged.

A common reaction to the Rebel Garages proposal is "Whoa, you want to turn alleys into Hong Kong," she said.

The partners readily admit the idea poses a number of challenges, not the least of which is how trash collection would work under the Rebel Garages scenario.

"It would be just like New York City," where garbage pickup takes place in the streets and sidewalks, Reschke said. 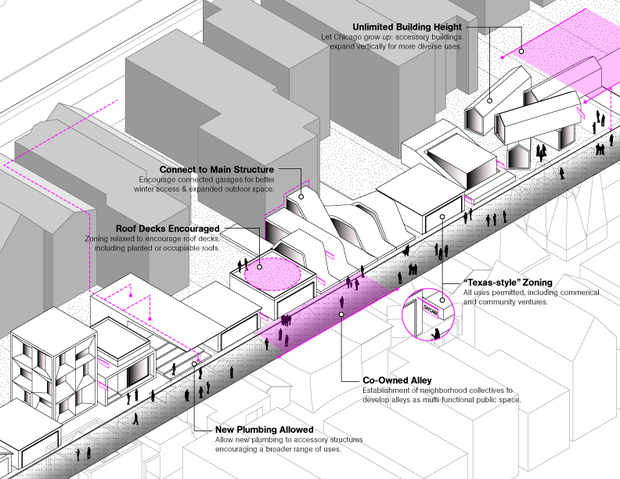 A handful of zoning regulations stand in the way of transforming Chicago's alleys and garages. [Future Firm]

At the moment, Rebel Garages is more of a conversation-starter. To push the concept from theoretical to practical, the couple's next step is to interview Chicagoans who are already rebels without knowing it was a cause.

"We're trying to build a research library documenting the use of garages," Lui said.

The idea wouldn't work for every alley, the architects conceded, nor do they expect it to be embraced wholesale.

Zoning changes could be made in certain parts of the city, much in the way areas are designated manufacturing districts. Rebel Garages would become part of the urban mix alongside existing residential and commercial options, and people could choose to live there or not.

In the same way that today's house hunters' wish lists include amenities like "near public transportation" or "close to restaurants," Reschke predicted that one day folks might say, "I want to live on a Rebel block."