Are Chicago Beaches Safe? Police Set Up 'Mobile Patrol' To Crack Down

SOUTH SHORE — In the wake of several high-profile brawls and incidents at Chicago's beaches just as summer weather has arrived, Chicago's top cop announced a new strategy to keep the peace.

"It is our shared goal to make sure every Chicagoan can enjoy our great parks, food and attractions in safety," Johnson said at a press conference at South Shore Country Club, 7059 S. South Shore Dr. "The CPD is ready and equipped to keep our streets safe."

The centerpiece of the plan is a revamped "Summer Mobile Patrol" staffed by 100 officers pulled from districts throughout the city, Johnson said.

The 100 officers will be spread over two shifts, with the mobile patrol coming online for the department's second and third shifts covering afternoons and nights, according to the Police Department.

Officers part of the roving patrol will concentrate mostly on keeping the peace at public places like neighborhood parks and the lakefronts, though the patrol can be called to violent events like shootings, said Anthony Guglielmi, spokesman for Chicago Police.

Police last used a mobile summer patrol in 2012, but that effort was restricted to the lakefront, Johnson said. This year's patrol will can be deployed throughout the city as necessary, he said.

"It's one more tool in our toolbox to keep Chicago residents safe," Johnson said.

Chicago, already struggling to control violence in the neighborhoods, has been plagued with beach problems in the past several weeks, from huge videotaped brawls to large piles of trash to near tragedy.

In the most recent case, a man pulled a gun at Oak Street Beach, pointed it a man's head and pulled the trigger twice — but it misfired, according to reports.

Johnson said the Summer Mobile Patrol plan was already underway before the recent beach violence, but noted: "Those are instances we can use the mobile force."

Officers with the summer mobile patrol will be deployed to beaches on top of the regular lakefront patrols coordinated by the Near North and Town Hall districts, Johnson said. The group will regularly clear parks at their 11 p.m. closing time and will enforce laws against underage drinking, he said.

The day after Memorial Day saw a huge trash problem at Chicago beaches as people trying to beat the heat left garbage up and down the lakefront. Fox Chicago captured footage the next day as dawn broke, showing what many described as an embarrassing scene of disrespect for Chicago's jewel.

Johnson said the mobile patrol will not only be at beaches and parks but will also have a presence at special events and holiday celebrations. Officers will clear parks at their 11 p.m. closing time and will enforce laws against underage drinking, he said. 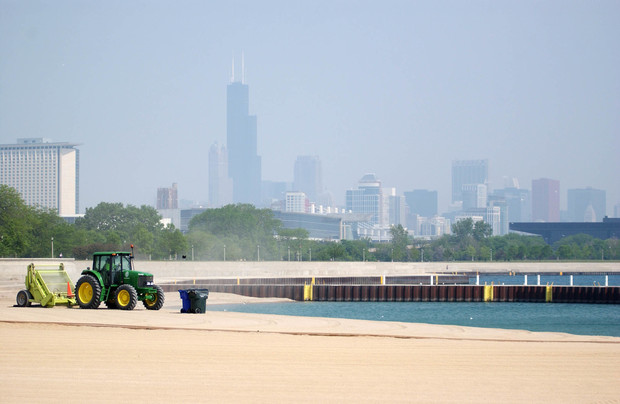