Extend The 606 Under Kennedy Expressway, Over Chicago River, Alderman Says

BUCKTOWN — A year after its opening, a freshman alderman wants to extend The 606's Bloomingdale Trail eastward — under the Kennedy Expressway and over the Chicago River — through the former Finkl steel mill site.

"Spanning two obstacles, a river and an expressway, will certainly be a big ticket item. If you look at the amount of time that it took from conception to reality [to build the first part of The 606], it suggests that we need to continue talking about the extension," Ald. Brian Hopkins (2nd) said.

The former Finkl site between the river and Clybourn Avenue is considered one of the biggest redevelopment opportunities in the city. Hopkins would like to extend the trail east to Kingsbury Street, along the eastern bank of the river.

Earlier this month, Hopkins showcased a rendering of the plan at a City Club luncheon as part of a presentation about infrastructure in his ward. Hopkins said he would like to incorporate the extension of the trail into the infrastructure plan for the Clybourn Corridor.

"There was considerable support for a 606 extension. I have not talked with anyone who thinks it's a bad idea," Hopkins said.

There is no cost estimate for an extension. Hopkins said that building the trail under the Kennedy Expressway rather than above it would be less expensive.

Hopkins' rendering by architecture firm Skidmore, Owings & Merrill shows the trail, which ends at Ashland Avenue, continuing east, under the Kennedy Expressway and over the North Branch of the Chicago River, using an unused railroad swing bridge. The nonworking steel swing bridge was built in the late 1890s, originally as a wooden structure. It is owned by the Canadian Pacific Railroad.

According to The Chicago Bridges Recording Project, the bridge's "ingenious design answers the constraints of a small site on a bend in the river," as the river meanders southeast toward the Loop, bends south at Webster Street, then eastward again after Cortland Street. 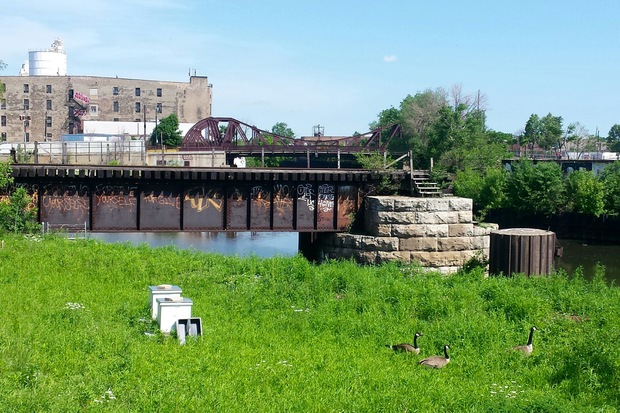 If the trail were to be extended, bike commuters who live in the Bucktown or Logan Square area could continue on other existing bike routes to get to work Downtown, or park their bikes and take a water taxi to work, Hopkins said.

There is a water taxi that docks under the North Avenue Bridge and goes Downtown.

"People might look forward to their daily commute if they could ride a bike and a boat on their way to work," Hopkins said.

For years, the idea to extend the trail has been suggested. The estimated $95 million to complete the first leg of the park system has another $14 million left to raise, it was reported last week.

Jamie Simone, interim Chicago Region Director of The Trust for Public Land, a nonprofit land conservancy group that the city tapped to manage and oversee The 606, said that extending the Bloomingdale Trail has been part of the park's longterm vision.

"The Logan Square Open Space Plan of 2004 called for creation of the Bloomingdale Trail and expansion east to the river. ... Our focus at this time is on completing the second phase of The 606, including opening the two additional, ground-level parks," Simone said.

However, she added in a statement, "we look forward to continuing conversations about expanding green spaces in all our neighborhoods, part of The Trust for Public Land’s mission to put a park with in a 10-minute walk of everyone in the U.S."

Margaret Frisbie, executive director of Friends of the River, said her nonprofit group was "open to all the good ideas that are out there."

"The more we are using the river creatively, that's what we're behind and excited about," Frisbie said.

Frisbie previously said she has been in touch with the Trust for Public land for many years about the topic of extending the Bloomingdale Trail over the Chicago River.

"That corner where the trail ends [at Ashland], you stand there and say, 'Where am I going to go from there?' It's exciting that the timing of the trail being almost done coincides with the redevelopment of the properties [in North Branch]," Frisbie said.

Though the former Finkl site has not yet been redeveloped, Hopkins said the project could add $20 million yearly in revenue taxes to the city, far more than the approximately $400,000 that the site pays now. "You can see the huge gap in what it will be paying [in taxes] when it is fully developed," he said.

Hopkins said that bringing up the extension of Bloomingdale Trail now would help to preserve a potential right-of-way for it.

"Much like the existing trail, the money to pay for it could come from a variety of public and private sources," Hopkins said.

But for fans of Bloomingdale Trail's elevated cruising above the car traffic, it's important to know that not all of the proposed extension will be elevated.

"For now, the right-of-way for where it goes after [the trail] crosses the river, is unsure. There are some railroad lines that might be an option or a combination of bikeways on streets to get Downtown. The cost to build elevated vs. at-grade is typically double. It's not a luxury we can afford," Hopkins said.